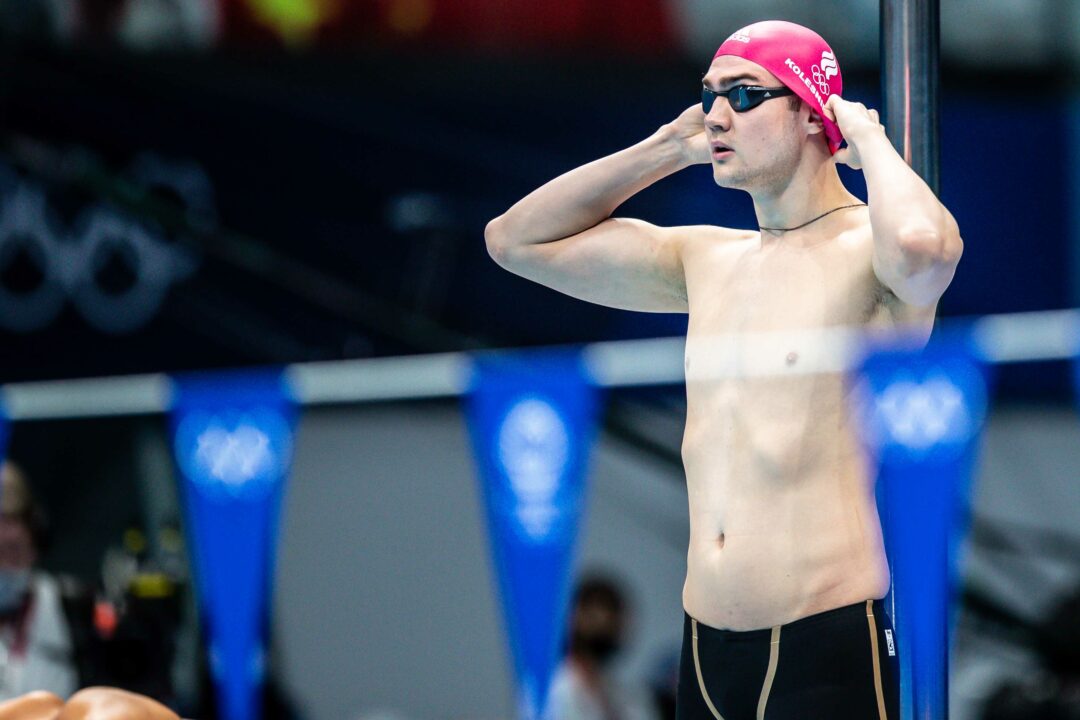 Kolesnikov's time of 47.11 erases the previous European Record of 47.12, set by Alain Bernard in 2009, and qualifies him first into the men's 100 free final. Current photo via Jack Spitser/Spitser Photography

Kliment Kolesnikov blew the doors off the second semi-final of the men’s 100 freestyle, assuming the early lead before ultimately trouncing the field by almost seven tenths of a second in 47.11.

That time from Kolesnikov not only knocks two tenths off his Russian National Record of 47.31, set at their Olympic Trials in April, but also lowers the official European Record of 47.12, previously held by Alain Bernard.

Bernard set that record at the 2009 World Championships, wearing one of the now-banned polyurethane suits.

The Frenchman actually swam a time of 46.94 one month prior to those Worlds, but it was never ratified as an official world or European Record due to the suit he was wearing, a prototype of the Arena X-Glide, not receiving approval from FINA.

FINA then asked Arena to modify the X-Glide suit to meet its standards—so the version of the suit Bernard wore in that swim was never approved. Thank you to commenter ‘HJones’ for pointing this out.

Kolesnikov was near-identical to his opening 50 split from the Olympic Trials, flipping .03 quicker in 22.52, but made up the majority of the ground coming home, recording a blazing 24.59.

That back-half split actually only tied the 21-year-old for fifth among the 16 swimmers in the semi-finals, but his opening 50 was the fastest. Caeleb Dressel, who qualified second overall by topping the first semi in 47.23, was next-fastest at 22.55.

Kolesnikov’s swim registers as the ninth-fastest performance in history, and he moves up from 11th into eighth all-time among the fastest performers.

Note: Despite not being ratified as an official record, Bernard’s 46.94 is still considered when ranking all-time performers/performances.

Kolesnikov is coming off of winning silver in the men’s 100 backstroke, putting up a personal best time of 52.00. That showing was also under the European Record coming into the final, but his countryman Evgeny Rylov picked up that accolade when he won gold in 51.98.

Rylov’s gold was also the first Russian Olympic gold medal in the pool since 1996, which was also the last time a Russian swimmer won the men’s 100 freestyle: Alexander Popov. Kolesnikov has positioned himself to join Popov as the only Russian Olympic champions in the event on Thursday morning.

NBC has to be getting worried that their poster boy Dressel may lose this one.

Impressive kliment! Amazing swimming ability, just look at the body he has compared to the rest (excluding popovici)

A bit of an addendum as to why Bernard’s 46.9 was never ratified: the Arena model that he wore wasn’t the same X-Glide worn by athletes in Rome, it was a suit that never got FINA approval at any point. I think it was a prototype that they were then asked by FINA to modify to meet whatever lax rules were set in 2009. You’ll read that a lot of swims in suits that eventually got approval for those WC were retroactively ratified, but Bernard’s never did. I think Irie had the same situation in breaking the 200 BK that year.