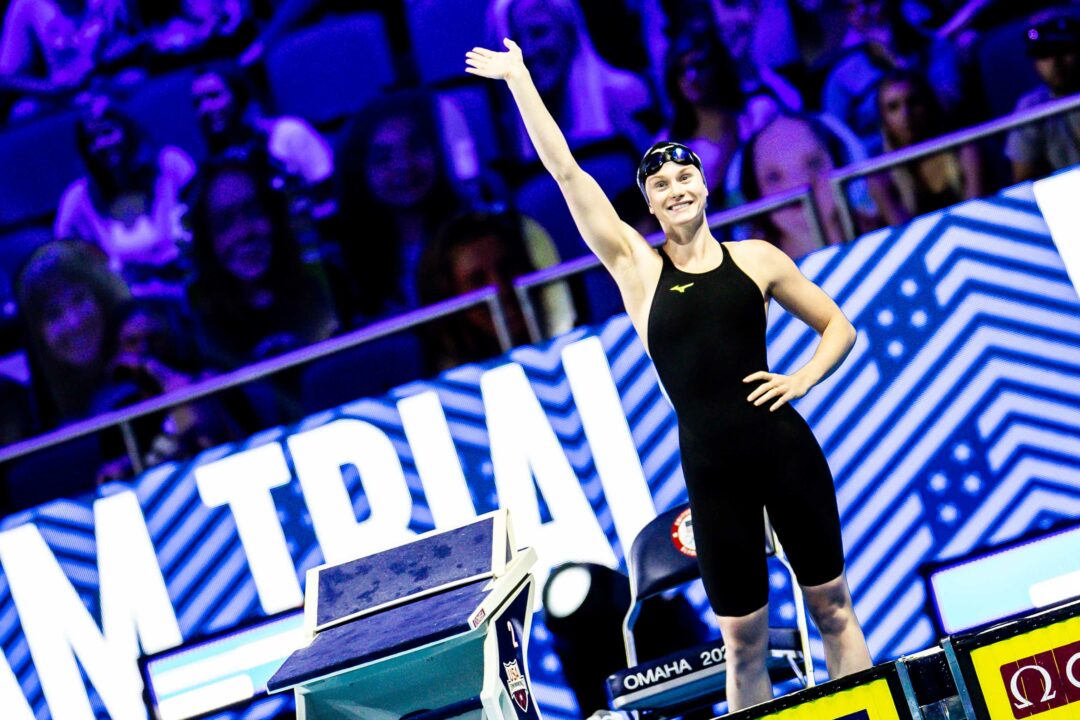 American swimmer Erika Brown won a swim-off for 2nd alternate on Wednesday evening in Tokyo, but a pair of scratches have bumped her into the semifinals. Archive photo via Jack Spitser/Spitser Photography

If you ever wonder why they swim-off for alternate places, now you know:

A second scratch from the semifinals of the women’s 100 free by Canada’s Kayla Sanchez has moved American Erika Brown into Thursday’s semifinals. Brown was in that position of two scratches and a victory in a swim-off in a time of 53.51.

Sanchez was the second top 16 finisher from the prelims of the women’s 100 free to scratch after Dutch swimmer Ranomi Kromowidjojo also scratched.

Sanchez was the 10th-fastest swimmer in prelims of the women’s 100 free, swimming a 53.12 that cut .45 seconds off her previous lifetime best in the event.

Finish Order of the women’s 100 free

After her tuneup swim, the American Brown, who surprised at US Trials to swim out of Lane 8 and nab an individual spot at this meet, was three-tenths faster in 53.51 to earn her spot in the Thursday morning semifinals.

The 22-year old Brown won an Olympic bronze medal as part of the finals quartet in the women’s 400 free relay earlier in the meet.

While Canada did not put out a statement about the reason for Sanchez’s scratch, it is likely part of an effort to rest her for finals of the women’s 800 free relay. Canada was 4th in prelims without Sanchez, and even matching her best flat start time (1:57.23) would improve the relay by almost three seconds when compared to Sydney Pickrem’s 1:59.82 anchor in prelims. With Sanchez, Penny Oleksiak, and maybe Taylor Ruck available for finals, Canada is in position to chase down China and repeat their bronze medal performance from the Rio 2016 Olympics.

🇨🇦 is going all in on this not just for a medal, but for gold! Yes the Aussies on paper are essentially a lock. But their 4th swimmer that they have to use for the 4×2 hasn’t event swam yet this week, so their strategy of using 8 different women ended up locking out a 155.1 swimmer from the morning.
It’s a longshot, but with Penny’s 154, Rebecca’s awesome 155 split, and Summers 156, their hoping Kayla can dig in with a 156 or better based on her form and then give the Aussies just a bit of a run. Of course it will be no ez feet to beat US for Silver either, or Chinese of they swap… Read more »

I guess they will be replacing three swimmers from prelims then – Savard, Harvey and Pickrem out for Oleksiak, McIntosh and Sanchez. I’m a bit surprised since Savard’s lead off was decent, and Sanchez has a shot at the 100 FR final. But I guess they think she’s having too good a meet to not put her in the relay.

They should have given Sanchez the chance to take that shot. Look at the Chinese who did a brutal double. 100free I thought is not that bad and more than 1.5hr of rest should be enough if they really wanted her to be part of relay. Otherwise, veteran Savard can do the job as well.

Erika loves to race, so cool for her to get another chance at the Olympics.

If she doesn’t make the final, maybe she’ll get a PB.

Lane 8 helps her because she’ll have less turbulence to fight through.

are you forgetting Summer McIntosh for Canada in the 4×200….I believe they will be gunning for better than bronze!

Also interesting decision now with the medley relay. She has been faster than all other girls besides Weitzel and she is a proven relay swimmer (20.4 and 45.5).

What? Faster than who? Surely not Hinds or Manuel

She has been faster than Hinds multiple times both individual and relay split. She also has more experience than Hinds internationally being an American and World Record holder for Team USA.

Manuel at her best is a different story

I wonder if this is a rest thing with her. She got a lot better as Olympic Trials took place and seems to be doing the same thing in Tokyo?

I think it’s an execution thing. How could you be more rested at Trials after swimming the 100 fly and 100 free rounds rather than just truly “resting”? Same thing here. People don’t go into the biggest taper of their lives doing off the blocks suited 100’s the week of the meet. More days into the meet doesn’t necessarily mean more rest. More likey she just adjusted to sleep/nerves or tweaked some things.

She has been like this even throughout SEC and NCAAs, better as the meet goes on, like Dressel