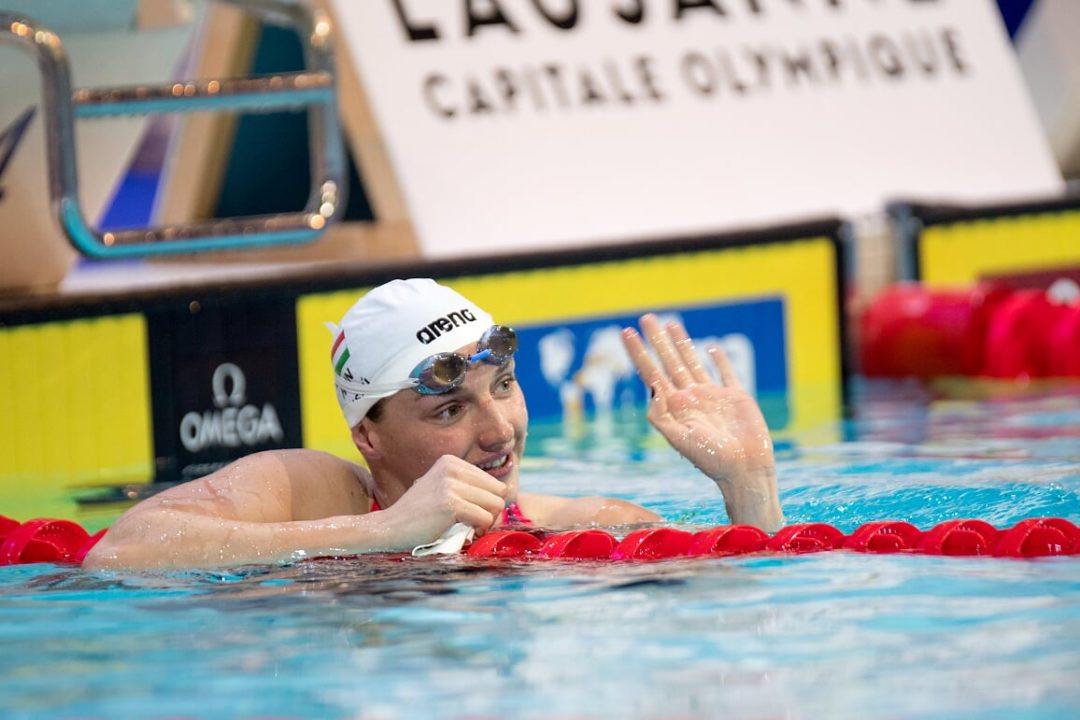 Katinka Hosszu powered her way to a new Hungarian national record in the women's SCM 200 breast on day 3 of Hungarian Nationals. Archive photo via Kevin Reust

The Iron Lady was at it again on day 3 of the 2019 Hungarian Open Short Course Championships, reaping 3 additional golds to bring her haul to a total of 9 with just 1 more day of competition.

Her first victim in Kaposvár this evening was the 400m IM where the 30-year-old Olympian captured the top prize in a mark of 4:33.77 to win by over 4 seconds. It turns out this swim was just a warm-up for her big-time push in the 200m breast, where the 30-year-old established a new national record en route to gold.

Flash forward to tonight, and Hosszu opened in a swift 1:07.91 and closed in 1:12.72 to put up 2:20.63, the fastest time of her prolific career. For perspective, this non-breaststroke specialist’s new Hungarian national record would have placed 6th at this year’s European Short Course Championships.

With energy still left in the tank, Hosszu closed her session with a win in the 200m back, an event in which she opted out of in Glasgow in favor of her bread-and-butter IM events and the butterfly races. Tonight, Hosszu snagged the top prize in 2:03.55 to comfortably finish ahead of the next closest competitor Katalin Burian and her silver medal-worthy 2:05.29.

Quality competitions today. Top 5 of men’s 100F would have qualify as top 11 for last week’s European SF, top 3 of men’s 400IM would have been finalists last week, Szabó-Feltóthy also improved her 400IM time to top 8 worthy for last week. Horváth improved his time to almost finalist time in men’s 200BR, Telegdy’s and Bohus’s time would have been 5th last week. Jakabos’s 100FR time as the first member of the relay is an almost finalist time (women’s 100FR is far from being a Hungarian event nowadays). Hosszú is mentioned in the article, but also Békési’s age record would have been 9th at the Europeans.

Are you sure it is appropriate language speaking about lady, no matter what she is made of. On the other hand why should I distrust your judgement. 😀

Also assuming Verraszto didn’t go 4:04.66 in the 400 free either since, again, that looks suspiciously like an IM time done by an IMer.

I was going to say, I think I could probably do a 4:33 free if I went to masters just a little more regularly.

Ha! Before you try it, I fixed it. Thanks!