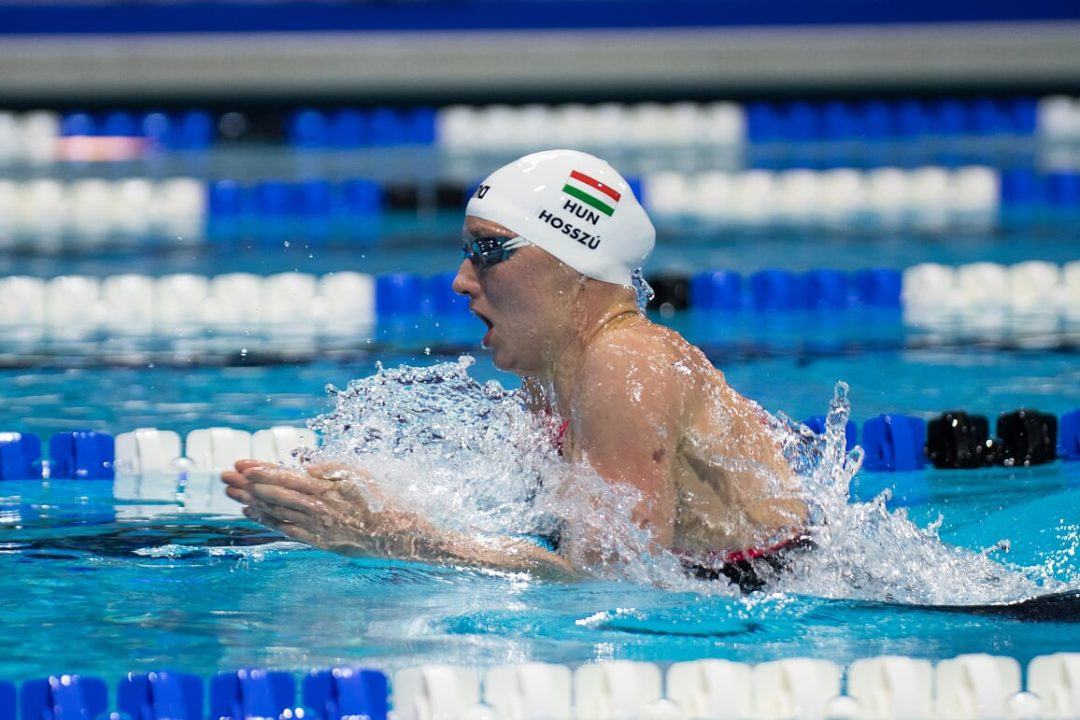 One event on the Iron Lady’s agenda here was the 200m fly. Following up on her powerful 2:03.21 podium-topping performance at the SC Euros, Hosszu took the national title by over a second ahead of runner-up Boglarka Kapas. Kapas clocked 2:05.80 for 2nd place while Zsuzsanna Jakabos touched in 2:06.83 to round out the top 3.

Jakabos took bronze in this 2fly event in Glasgow, registering a time of 2:05.00, while Kapas would have also made the final had she not been eliminated due to the 2-swimmers-per-nation rule for advancement at the Championships.

Hosszu was also successful tonight in the 100m IM, where the 30-year-old multi-Olympic champion logged the only sub-minute outing of the field. She touched in 58.57, while Jakabos once again finished in 2nd place in a time of 1:00.51.

Hosszu wrapped up her trio of golden performances with a win in the 100m breast. Hitting the wall in a time of 1:06.29, the Iron Swim leader was able to hold off runner-up Dalma Sebestyen, who settled for silver less than half a second later in 1:06.73.

Tonight’s time for Sebestyen checks-in as a monster personal best, laying waste to the 22-year-old’s former quickest of 1:07.15 notched at the 2015 edition fo the European Short Course Championships where the Hungarian placed 17th.

As for Hosszu, although she owns a personal best and Hungarian national record of 1:05.60 in this 100m breast event in short course meters, tonight’s outing registers as the 2nd fastest time of her extensive career. Splits for Hosszu’s 1:06.29 this evening include 31.44/34.85.

In another men’s race, Domink Kozma put the 100m IM Hungarian national record on notice, coming within .26 of the mark en route to gold. Touching in a time of 53.26, the man produced the 2nd quickest time of his career, within striking distance of David Foldhazi‘s national record of 53.00 that’s been on the books since 2012.

Daniel Sos and Cseh were also in the race and under 54-seconds, with the former grabbing silver in 53.30, while Cseh nailed bronze in 53.63. Cseh’s time represents the 5th fastest time of the 34-year-old’s long career.

The man who took 50m free bronze in Glasgow, giving Hungary its first-ever men’s medal in the event at that biannual competition, Maxim Lobanovskij, won gold once again tonight in the event. Touching in 21.18, well off his 20.76 national record from last week, Lobanovskij still got the job done.

Finally, in the men’s 100m backstroke, newly-minted national record holder Richard Bohus demonstrated his prowess again, taking gold in 50.78. Splitting 24.57/26.21, Bohus beat the field by over a second, coming within .13 of the Hungarian standard he produced en route to just missing the Glasgow final.

Hard to believe Cseh is only 34. Seems like he should be in his 40’s by now, he’s been around so long.

That’s an absolutely nasty 100 Brst for someone who isn’t a specialist breaststroker.

she’s a specialist in not specializing! she’s gunning for that 200/400IM gold. I wonder what the Hungary women’s/mixed relay prospects are at Tokyo.

She’s really worked hard at improving her breatsstroke in the last couple of years. I remember that it used to be her weakness, but she’s so good now!
Becoming this good in breaststroke of all things so deep into her carreer is really a testament to her work ethic.
I doubt there is anyone in any sport as driven as she is. I’m not sure it’s healthy or would work for anyone, but she sure seems to know what gets her results.

I bet a lot of the other swimmers in that range are breaststroke specialists or primarily breaststrokers.

Probably better than Locthe or Phelps ever was/is, and no one beat them on the breast leg of the medleys. She’s the versatility GOAT, face it.

It’s a beginning of long discussion of what kind of versatility I have to face. I’m not really ready for that now. Just briefly. I understand the versatility of human abilities like Ledecky’s or Sjostrom’s ones. The versatility from 100 to 1500, from 50 to 400. But medley? It is so artificial and isn’t clear what we are actually dealing with. You are probably a big fan of decathlon and are thinking about these athletes as GOATs of track&field. Or you are getting extremely excited by watching steeplechase or triple jump. Yes there are definitely outstanding athletes who are good in these kind of physical exercises. But I personally (and this word is very important in this discussion) prefer to… Read more »

The question was actually to FST. He/she was talking about unique work ethic of Hosszu. The ethic that could be dangerous to any other not that “iron” swimmer. And that is the most puzzling thing to me about Hosszu’s myth. I know a lot about this swimmer but the only thing that I never read about is how her training looks like. How many days per week is she training, how many sessions per day, how many hours per session, how her sets look like? Does she had dry land exercise and what are they? In what regard this work ethic makes Hosszu unique and why is it not healthy for other swimmers.
I believe FST definitely knows what… Read more »

Very impressive. Hungarian reports say she has a specialist breaststroke coach on her staff, it’s awesome that it shows so prominently. The breaststroke focus makes sense in light of Ye Shiwen’s breaststroke performances this year.

Hussu is to swimming what Puskas was to soccer and Federer to tennis.