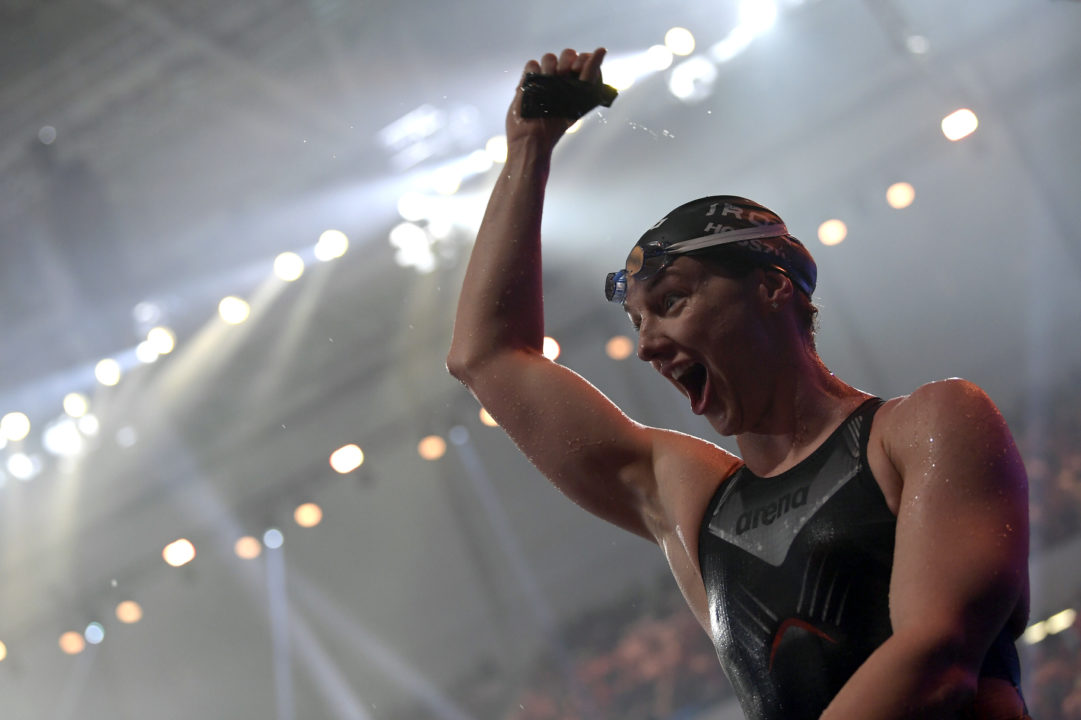 There was no stopping the Iron Lady tonight, as Katinka Hosszu went 3-for-3 in national short course titles in her home country. Archive photo via Fabio Ferrari/LaPresse

Hosszu first sealed the 400m free victory in a time of 4:02.13, beating the reigning European Short Course Championships bronze medalist in the event, Ajna Kesely, by over 2 seconds. Hosszu stopped the clock in a mark of 4:02.13, while Kesely followed in 4:04.27 and Fanni Fabian finished .30 later in 4:04.57.

For the Iron Lady, she’s been under the 4:00 barrier in this event 3 times in her career, with her personal best checking in at the 3:58.84 notched at the 2015 edition of the European Short Course Championships. Her most recent quickest in the SCM 400m free came in teh form of the 4:02.50 notched in Eindhoven at last year’s Swim Cup.

Hosszu’s next victim was the 50m fly, where the versatile superstar put up the only sub-26 outing of the field in 25.87 for gold.

Finally, Hosszu clinched the top prize in her bread-and-butter 200m IM event, topping the podium in a mark of 2:07.76. That was enough to easily keep tonight’s silver medalist, Zsuzsanna Jakabos at bay, with the multi-SC Euros medalist stopping the clock at 2:09.22.

19-year-old long course 200m fly World Record holder Kristof Milak got his hands on some gold, topping the men’s 400m free field in a time of 3:42.70. His time tonight represents the 3rd fastest outing of his young career, whose resume includes a PB in this event of 3:39.89 from 2018.

Milak came up just short of gold #2 in the men’s 50m fly, where Szebasztian Sabo hit the wall first in a time of 22.59. Milak touched in 22.94 to represent the only other swimmer under 23 seconds in the final.

This time would have worth a final for Sós at ESCC.

Does Katinka give away her medals to kids in the stands a la Ryan Lochte?

I hope not!
Kids should learn that medals need to be earned with hard work and talent.