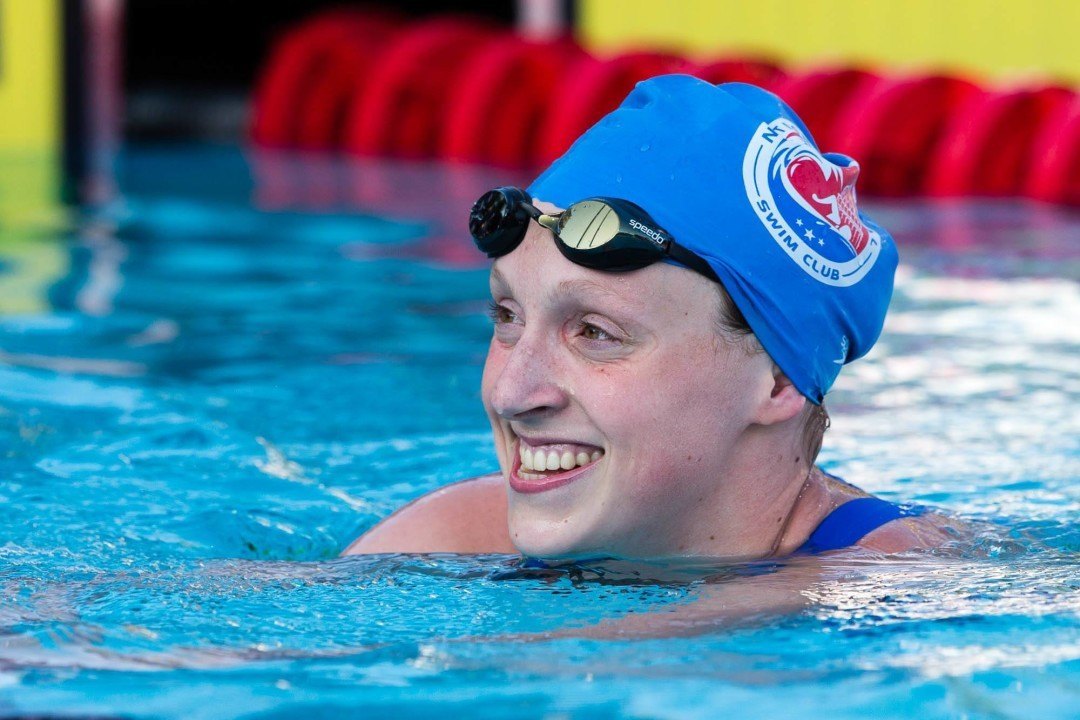 Almost every time Katie Ledecky finishes a race, some sort of record or accomplishment is broken that puts her another echelon above the current best, and into the realm of the greats. Archive photo via Tim Binning/TheSwimPictures.com

Almost every time Katie Ledecky finishes a race, some sort of record or accomplishment is broken that puts her another echelon above the current best, and into the realm of the greats.

Her 800m freestyle world record at the Arena Pro Swim Series at Austin brought her below her incredible 8:07.39 record that she set at the 2015 World Championships.

With her time of 8:06.68 she took a sizable chunk off that mark, completing an incredible 7.18 second drop from the first time she broke the record back in 2013 with an 8:13.86. To put into perspective just how impressive Ledecky’s improvements are to the event, it took roughly 26-years for the record to drop that amount to Ledecky’s first 800 record.

Since the first time she broke it, Ledecky has broken the record a total of four times including the mark she set in Austin. Not only was it her fourth time breaking the 800m freestyle record, but it was her 11th individual long course record of her career. That accolade compares her to Michael Phelps who broke his 11th long course world record when he was 18-years-old as well. Phelps was 18-years and one-month old when he broke his 11th, Ledecky was 18-years and 10-months old.

While her rise to becoming the best female distance freestyler of all time is certainly almost complete, Ledecky does have a few marks to better before she is entirely in a realm of her own.

Only four other swimmers, two male two female, have broken the 800m freestyle world record four or more times consecutively without anyone else bettering their records.

The first one to do it was Australian swimmer Ilsa Konrads who set her first world record in a time of 10:17.7 in January 9, 1958. She broke the world record two more times in ’58 before breaking it for the last time on February 19, ’59.

Both Stephen Holland and Vladimir Salnikov managed to break the world record in the men’s event at least four times consecutively. Holland broke it five times consecutively like Meyer, and then went on to break it two more times before he ended his career.

With Ledecky now among these four historic distance swimmers, the opportunity for her to set herself above even the greats is there this summer. If she’s able to break a world record at the US Olympic Trials then she will be tied with Meyer and Holland as having broken the 800 record the most times consecutively. If she’s then able to break the world record at the Olympic Games in either the semi-finals, finals, or even both for that matter, she will put herself into a new realm as a distance swimmer.

Currently she’s tied as the only swimmer in history to have broken the 1500m freestyle world record a total of five times.

Across the 400, 800, and 1500m freestyle events, the record for most consecutive world records ever done by a swimmer stands at eight. Ragnhild Hveger broke the women’s 400m freestyle world record eight times between 1937 and 1940.

With plenty of time to go between now and the US Olympic Trials, Ledecky shows no signs of slowing down as she’s solidifying herself as the most prominent distance swimmer in history one race at a time.

Katie can break world records in 200-1500. And next Olympics the 10k too. How many of each will be fun to watch! Good luck Katie!

If Ledecky gets the 200 WR and wins gold in the 200-800, she’s my immediate pick for greatest of all time freestyler. Even if she doesn’t do this, she has a stake at that title with enough longevity and consistent dominance in the 400-1500.