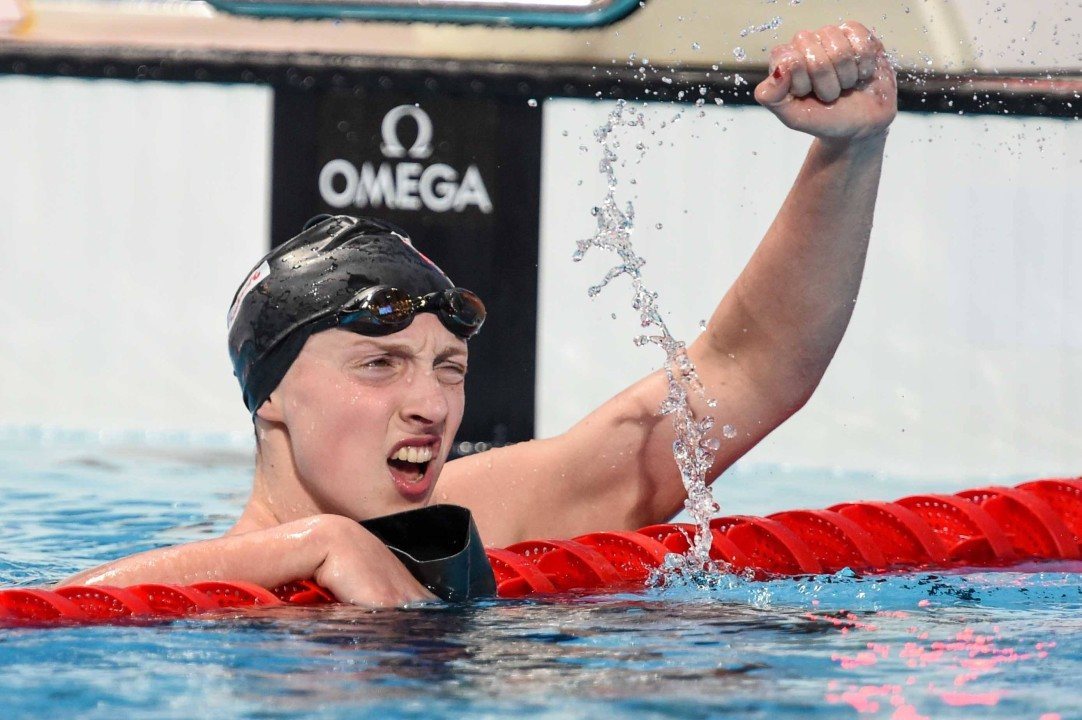 Upon winning the 800m freestyle final Saturday night at the 2015 FINA World Championships, Katie Ledecky became the first swimmer to ever win four freestyle golds at either a world championships or Olympic Games. Current photo via Tim Binning/TheSwimPictures.com

Upon winning the 800m freestyle final Saturday night at the 2015 FINA World Championships Katie Ledecky became the first swimmer to ever win four freestyle golds at either a world championships or Olympic Games.

Ledecky was previously tied with some of the biggest names in freestyle swimming history including Ian Thorpe, Grant Hackett, and Debbie Meyer as the only swimmers to have ever won three gold medals.

With her 800m freestyle victory, Ledecky is now in a league of her own.

Her 2015 medal haul started on the first day of competition where she defended her 2013 400m freestyle world title. With a time of 3:59.13, Ledecky bettered Frederica Pellegrini’s championship record from 2009 by two one-hundredths of a second, and won the race over Sharon Van Rouwendaal by 3.89 seconds.

Ledecky was back at it the next day swimming in the heats of the 1500m freestyle. She held nothing back at this point, beating her own world record in the event with a 15:27.71.

Just a few short minutes after, Ledecky had to fight for a spot in the 200m freestyle where she was a dark-horse to win. With only one event separating the 1500 free and 200m frees semis, Ledecky still managed to qualify sixth for the 200 free final with a 1:56.76.

On day four Ledecky came back strong on the last 50 of the 200m freestyle in order to win the race from lane seven. Ledecky beat world record holder Frederica Pellegrini 1:55.16 to 1:55.36 in order to win her third gold of the meet and set herself up for her fourth.

With the 200 free win, Ledecky was set up perfectly to become the first swimmer to ever win four individual freestyle golds at any major international competition.

Ledecky had day five off as far as individual events, but in finals she claimed yet another gold as a part of the women’s 4x200m freestyle relay team. That gave Ledecky her fourth gold of the meet.

Taking things easy on the sixth day of competition, Ledecky took the top seed in the women’s 800m freestyle as expected. What wasn’t expected was the time she would go in finals Saturday.

As she touched the wall in the final of the 800, history was made. Ledecky had won her fourth gold medal and set an incredible world record of 8:07.39 which is undisputedly one of the fastest records in the books.

**Note: results from the 1980 Olympic Games were not included

An incredible, passionate; fiercely competitive swimmer……….destined to set world records that will stand for DECADES; if not longer…….former record holder, Janet Evans delights every time Katie blows her (1989) records out of “the water”…..an amazing human and athlete. “As good a swimmer she is; she’s even a better person”…said about her by the owner of the Washington Nationals, 2013?

Inge de Bruijn won 3 gold medals in both 2000 and in 2001 so she is probably the only one to have won 3 in both the Olympics and the World Championships by the looks of it.
PLEASE UPDATE 🙂

The list above is compiled of swimmers who have won multiple golds in FREESTYLE events. Inge de Bruijn is listed above for achieving two golds in both 2000 and 2001.

Hi dudes, would someone be kind to explain me the meaning of dark horse? Sorry, English is not my native. Language.

BTW Ledecky is a monster when swimming, unbeatable, great for her.

someone who is not considered a favorite to win, but has the potential to surprise everyone and take 1st

Switzerland, Colombia, Turkey, and Singapore; Countries that lose to Ledecky with their 4×200 F.R. Katie places 15th at WORLDS swimming the relay on her own – and if she was actually in the heat? Probably would have caught Hong Kong (8:06.51)
Also places 2nd at US Nationals tonight in the 4×200 F.R.

Just a couple of thoughts. Will Katie’s performance be looked back on as barrier breaking as let’s say Roger Bannister breaking the four minute mile in running?

Almost lost in all of this is that Lauren Boyle at the ripe old age of 27 achieved personal best times in both the 1500 and the 800. So maybe the “Ledecky effect” of people raising their game after experiencing what’s possible is already under way.

Captain spell-check to the rescue!