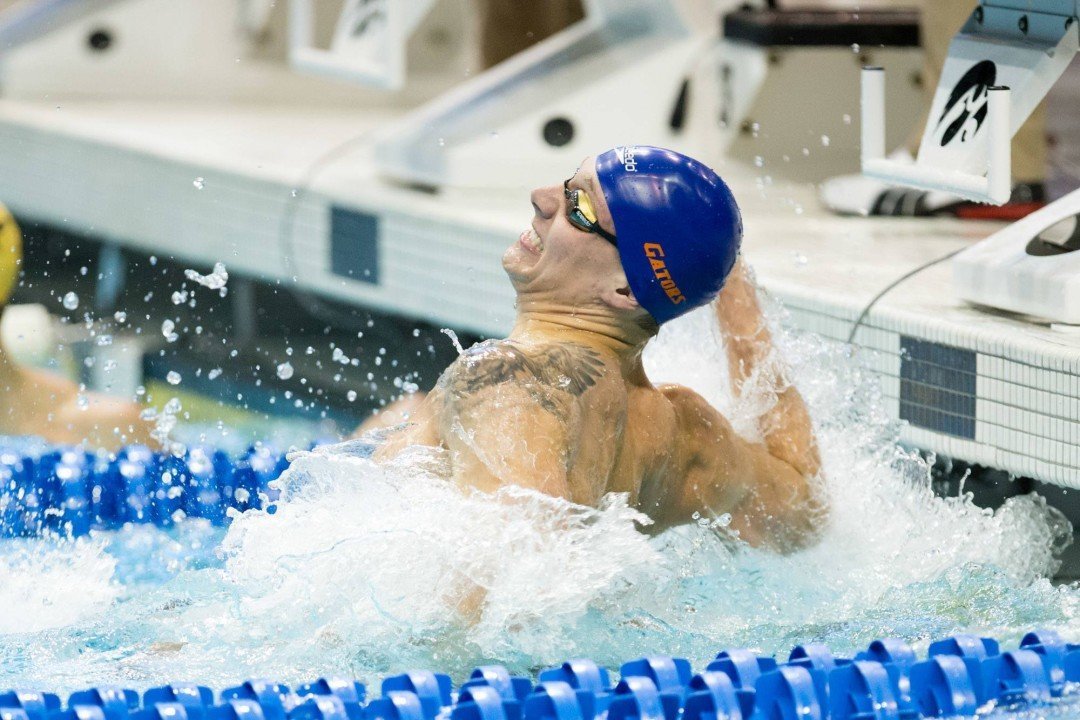 Caeleb Dressel will look to hunt down the national title in the men's 50 free after posting a new 17-18 NAG of 21.85 this morning Archive photo via Tim Binning/TheSwimPictures.com

Katie Meili holds the top seed heading into tonight’s 100 breast final after posting a time of 1:06.56 this morning. Meili will look to go under her personal best of 1:05.64 established at the Pan Am Games, as well as the 1:05.66 which was swum by Yuliya Efimova of Russia in winning the World Championship title in the event. Joining Meili in the A final will be Jessica Hansen of Australia, Lilly King and Laura Sogar who qualified 2nd, 3rd and 4th respectively. Rounding out the A final will be Bridget Blood, Sarah Haase, Andrea Cottrell and Emma Reaney. In the B final we will see Australian Georgia Bohl, 17 year-old Lindsay Horejsi and top seed Emma Schoettmer. Top seed in the C final will be 16 year-old Nikol Popov from Canyons Aquatics.

After his jaw-dropping 200 fly last night, Michael Phelps will have equal motivation for this race, if not more. After swimming 1:52.94 in the 200, a time which would have won the World Championship title, he has more bulletin board material after today’s finals session at the World Championships. Chad Le Clos won the 100 fly in a time of 50.56, faster than Phelps has ever been in a textile suit. After the race Le Clos had some choice comments for Phelps, which I think we’ve all heard, which will no doubt fire up the greatest swimmer of all-time tonight. 200 fly champion Laszlo Cseh also chimed in this morning, claiming Phelps’ win “doesn’t matter” because he won the World Championships, which is true enough: this is only Cseh’s second ever World Championship win and we can’t take anything away from the guy. Phelps and Cseh have had great respect for each other over the years. Le Clos on the other hand is Phelps’ biggest rival, ever since Le Clos beat Phelps for the 200 fly title in London and Phelps’ former rival in the 100 fly Milorad Cavic has retired. Phelps qualified 2nd overall this morning in 52.12, as he looked smooth and relaxed. Qualifying 1st was Jack Conger who was the only man under 52 seconds, in 51.97. Conger is coming off a silver medal performance and personal best in the 200 fly of 1:54.54. Qualifying 3rd was Matthew Josa in 52.21, Stanford’s David Nolan was 4th in 52.46 and Pan Am champion Giles Smith was 5th in 52.66, setting up a very fast final tonight. Rounding out the A final will be Tripp Cooper (52.88), Connor Black (53.03) and Braxston Timm (53.06). Swimming in the B final will be Michael Andrew, who went 53.36 this morning. Joining him will be Gunnar Bentz of Dynamo, Justin Lynch of California, and a pair of Japanese swimmers in Masa Kishida and Kohei Kawamoto. The C final will feature Andrew Seliskar, 200 freestyle champion Maxime Rooney and top seed Ryan Hoffer, who went 53.58 this morning. Among those missing the final was Matt Ellis, Eugene Godsoe and Thomas Luchsinger. Clark Smith initially qualified for the B final, but has scratched. Caeleb Dressel was a no show in the event this morning.

Madison Kennedy posted the top time this morning in the women’s 50 free, as the only one under 25 seconds in 24.93. She was followed by Amanda Kendall, Amanda Weir and Kelsi Worrell. Joining these ladies in the A final will be Amy Bilquist, Olivia Smoliga, Allyx Purcell and Faith Johnson. Smoliga’s 25.49 was the cut off for the A final. The B final will feature Madeline Locus, Katie Meili and top seed Lili Ibanez Lopez of Mexico. The C final will feature Katie Drabot and top seed 16-year-old Lauren Pitzer (25.79).

2015 NCAA champion Caeleb Dressel blasted a 21.85 in the prelims of the 50 free, the top time of the morning and the only man under 22 seconds. That was Dressel’s first time under 22 seconds, as his previous best was 22.22. This swim also broke the 17-18 National Age Group Record. That swim would have placed Dressel 5th in the World Championship final today. Hypothetically, if he swam that time in the semi-final at the World Championships, 4th place finisher Vladimir Morozov of Russia wouldn’t have made the final, and then Dressel would potentially have finished 4th. It’s far fetched, but something to think about. And Dressel did this in just the prelims. We’ll see what he has in store for tonight. The win tonight won’t come easy for Dressel, as he is surrounded by two very fast men. Josh Schneider qualified 2nd overall in 22.10, and is coming off a 50 free title at the Pan Am Games. Qualifying 3rd was 2012 Olympic silver medalist Cullen Jones in 22.11. Schneider and Jones will have lanes 5 and 3 respectively. Both men will want to crack 22 seconds tonight heading into the Olympic year. Joining these men in the A final will be Michael Chadwick, Wyatt Ubellacker, William Copeland, Kyle Darmody and Michael Trice. Trice’s 22.52 was the cut off for the A final. The B final will feature Roland Schoeman of South Africa who swam 22.55 this morning, as well as top seed John Murray of Alamo Area Aquatics (22.54). Swimming in the C final will be Michael Andrew (23.12), Townley Haas (23.34) and top seed Mark McGlaughlin (23.02). Among those missing finals were Blake Pieroni, Bruno Ortiz and Shayne Fleming. Tripp Cooper, David Nolan, Paul Powers and Junya Koga all didn’t show for their prelim swims this morning.

Caitlin Leverenz will look to sweep the women’s IM events tonight after posting the top time of the morning in the 400 IM of 4:41.76. She is followed closely by 200 IM silver medalist Madisyn Cox who went 4:42.43. 3rd seed Sarah Henry was 4:42.84 and 4th was Emily Cameron in 4:43.81. Rounding out the A final tonight will be Katherine Mills, Catalina Corro Lorrente of Spain, Bethany Galat and Mia Nonnenberg. Nonnenberg’s 4:46.25 this morning was the cut off for the A final. The B final will feature Lauren Driscoll, Annie Zhu, and top seed Jimena Perez Blanco of Spain (4:46.77). The C final will have Meghan Small, Brooke Forde and top seed Regan Barney (4:49.64).

The second heat of this relay will feature all the top-seeded teams, including Indiana University, Club Wolverine, University of Kentucky, Tennessee, Wisconsin and top seed Aggie Swim Club, who are seeded in 8:05.88.

Hope to see Schnieder and Jones joining Dressel in the 21s.

I have a feeling that Phelps and Conger are both going to blast the first 50 tonite and hold on. I would not be shocked to see BOTH of them 50.3.

Feeling the blues Shields didn’t win. Three 21s and two 50.3s tonite will heal that up. We’re doing USRPT ice cream sundaes tonite with the kids. Fast, head rush, crash…I’ll be all sugared up and ready for some speed. Hot, nasty bada$$ speed.

I will be floored if either Phelps or Conger goes that fast tonight.

I am going to plat it safe: 51.09 for Phelps. That would beat last year for him.

I think I am going to play it safe and not say anything. With my track record, I feel like I curse the poor guy every time I put him down for something really fast. (But here is really hoping HARD for something special!) 🙂

Hot dawg, nailed it to within 0.01. Impressive.

Thanks MCGILLROCKS!! None of my friends will believe me, at least I have you <3