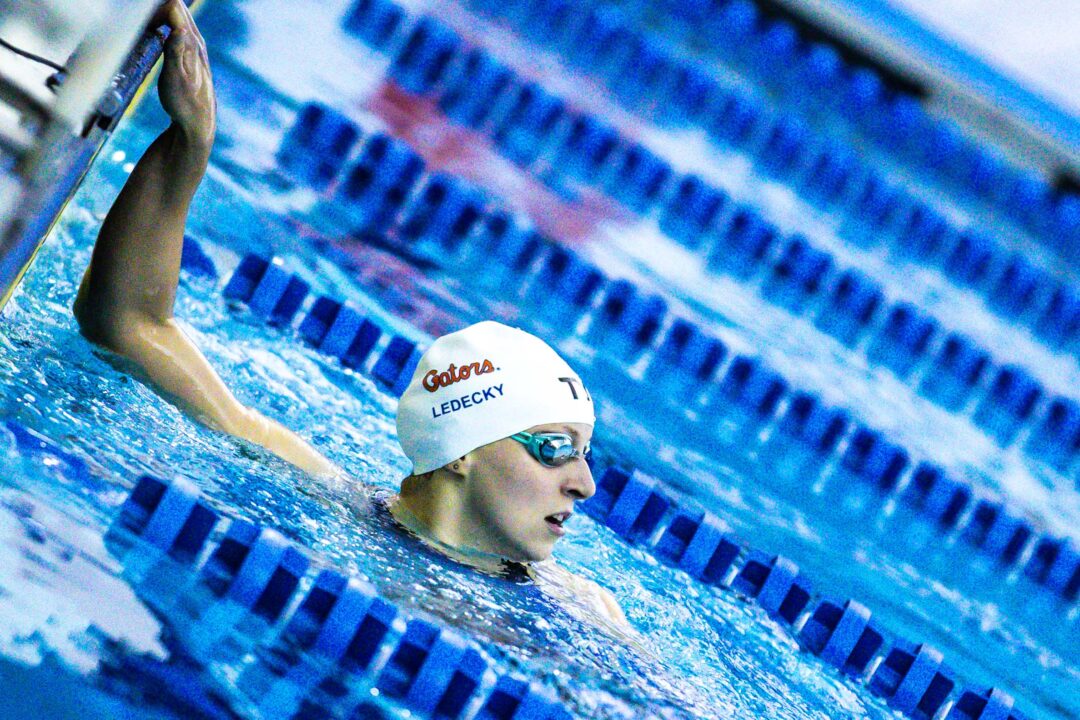 Jordan Crooks won a combined seven races last week to help lead the Vols to a pair of wins over No. 11 Georgia and Carson-Newman.

Florida hosted Auburn Saturday, January 22nd for a dual meet. The Gator men swam to a victory with a score of 201-99. The Gator women also swam to victory winning in a score of 184-116. This was Florida’s first meet of 2022 and their first meet since midseason as their meet against Texas A&M was canceled due to COVID-19 protocols. Auburn is coming off a win on the men’s side over Alabama. The Auburn women are coming off of a loss to Alabama.

The Florida men have been dominant within the conference as they are chasing their 10th-straight title. The Florida women have been dealing with a lot of swimmers who seem to have left the team. Auburn is rebuilding under first year head coach Ryan Wochomurka.

The meet also featured members of the post graduate groups training at each university, but official times and results were not published.

Senior Bobby Finke also picked up big points for Florida. Finke won the 200 backstroke in a season best time of 1:46.25. He also finished second in the 1000 freestyle swimming a time of 8:56.58. This was his first time swimming the 1000 freestyle in a dual meet this season. His teammate, junior Trey Freeman won the event in a personal best time of 8:55.93. Finke holds the top time in the NCAA this season in the event with a time of 8:44.44 which he swam going out in his 1650 freestyle at midseason.

Junior Aidan Stoffle also got an individual victory for the Tigers winning the 100 backstroke in a time of 48.15. His best time this season is a 46.80 which he swam at midseason leading off the 400 medley relay.

Although no official results and times can be found, MeetMobile displays Caeleb Dressel, Natalie Hinds, and Katie Ledecky as name entries into the meet. Auburn volunteer coach and distance freestyler, Zane Grothe tweeted today saying “Raced Katie Ledecky in a 500 today. Had the audacity to tell her good luck beforehand. I lost”

Raced Katie Ledecky in a 500 today. Had the audacity to tell her good luck beforehand. I lost

Man has one of the best pro groups in the entire country maybe he wants to make the most of it.

Where are you getting this from

I was there watching

Wow, Katie was always in the 4:35 range during her dual meets at Stanford and she’s already dropped two 4:30s unsuited at UF within the span of like three months

I guess it’s because she was always so far ahead of everyone else at Stanford while both of her 4:30s at UF were against guys so I guess closer races = more motivation for her to go faster?

Yeah she was raving 5 guys and was behind most of the time. She barely ran the best guy in the field and out touched him so that was def part of it

The best guy being Zane Grothe? Or someone else?

Working on closing speed perhaps? You never know with KL. She is a sports historians dream subject. Would love to write her bio.

Tyler Watson can swim a 4:15 500 which is still pretty decent though

It doesn’t matter that much for the guys at least, it’s just an exhibition race but it’s still fun to speculate about Ledecky’s training

She’s so unpredictable and it’s really fun to infer

I agree with you on the closing speed, because based on the way titmus splits her races Katie isn’t gonna win anything mid distance unless she closes in a 28 and I think she knows that herself as well

FYI The exhibition 200 is on YouTube, not a great video, Katie nd Lia Neal and the guys led by Dressel

I think you mean Natalie Hinds.

This was our assumption too.

Is anyone training with Gregg Troy anymore or has Nesty basically absorbed that whole group?

If I can recall correctly Troy has retired and so Nesty has absorbed that whole group incl. Dressel

He moved to a Texas club team

He’s on deck with Eddie in an emeritus role

Where has the article on this gone?

Dressels Tokyo Olympics was Troy’s crowning achievement. Deserves to rest easy now. Im sure he’s still got some input or advice here and there for Dressel should he need or want it.

Good. Should have done that years ago.

He’s waiting for the world-class aquatics center to open in Ocala so he won’t be fighting for pool time.

from what I remember, he wanted to retire even earlier but Dressel asked him to stay until the Olympics

The truth is out there.

Nesty you can run but you can’t hide

Sort of adding insult to injury to misspell Grothe’s name.