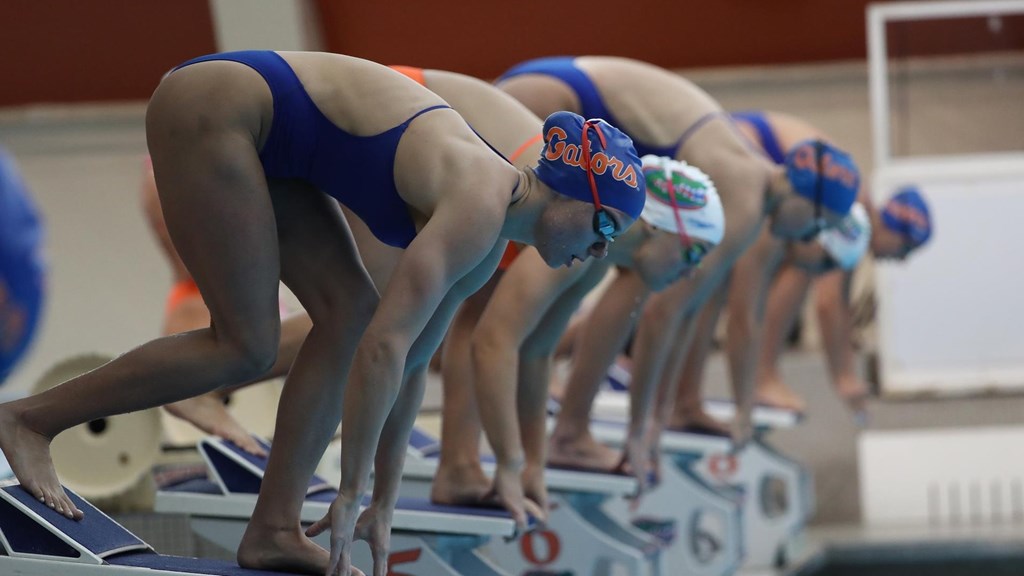 With SCM to SCY converted sprint freestyle times that rank among the NCAA’s best, Nikonova is a huge addition to the Florida squad. Archive photo via Florida Athletics

Sources say that Ekaterina Nikonova has finally arrived in Gainesville just in time for the SEC and NCAA Championships. The Russian swimmer is part of the Gators’ 2021 recruiting class that SwimSwam previously ranked 8th. She was originally announced to join the team in the fall, but will now begin this spring.

Looking at Nikonova’s converted times, it’s likely she’ll have an immediate impact on Florida both individually and on relays.

Based on midseason psych sheets, the Gators are projected to score 30 points at NCAA championships and the team currently ranks 21st nationally, according to the NCAA Scored Psych Sheet story published last week. If Nikonova can post NCAA qualifying times by the meet entry deadline of February 27, the Gators have the potential to earn points that they’re not currently projected to have.

Nikonova’s potential also depends on how quickly she can adapt to racing in short course yards. Predominantly a sprint freestyler/backstroker, her best times in short course meters convert to:

With Nikonova’s best converted times ranked nationally, she would be a threat to make the A Final at NCAA’s in multiple events. She would sit third in the 200 freestyle, fifth in the 100 freestyle, and tied for tenth in the 50 freestyle, with the potential to massively assist in any relay. Her converted 50/100/200 freestyle times would rank first for Florida this season. Nikonova’s converted backstroke times also rank among Florida’s top times this year.

A number of Florida’s top swimmers from last season have been absent from most or all of the competitions this season. 100 yard breaststroke school record holder Cecilia Porter only raced in the Gators’ meet against Florida Atlantic University back in October 2021. Vanessa Pearl has not competed since Wave II Olympic Trials in June 2021. Leah Braswell only raced in Florida’s meet against Florida Atlantic University and at the Gator Swim Club Holiday Classic. SwimSwam reached out to Florida, but the school said they had no information to share about those specific swimmers. The arrival of Nikonova will help smooth over some of those absences in the new semester.

Nikonova has the potential to be Florida’s go-to sprinter, a role that has been relatively open since Natalie Hinds graduated in 2016. Olympic bronze medalist Hinds recently announced that she is back training in Gainesville after beginning her swimming comeback with the post-grad group at Georgia, so while the varsity squad is limited in sprint talent, there is another sprinter in the pool to train with Nikonova.

The Russian swimmer has already made a name for herself on the international stage. Most recently at the FINA World Cup stop in Kazan back in October 2021, Nikonova took home a silver medal 0.95 seconds behind Australia’s Olympic Gold Medalist Madi Wilson. At the 2019 World Junior Championships in Budapest, Nikonova brought home three silver medals as a member of Russian relay teams.

In a similar move to Nikonova, Italian diver Elettra Neroni has also joined Florida’s roster for the upcoming semester.

Met this young lady while in Spain in August 2022 while on holiday. She swam at a club training session in Torrevieja with our daughter.
A lovely young lady who inspired the young swimmers. Good luck for the future.

They should earn more than 30 points on freestyle relays alone. They have Bates, who was the 2nd place finisher from last year’s NCAAs in the 200, plus Cronk who was one of the fastest entering 200 swimmers, and now Nikonova who swims world-caliber times in the 100/200 in SCM. Throw in Mack (or Golding/Mathieu/Zavaros for a 200) and between three relays, they should rack up, especially in the 400 and 800.