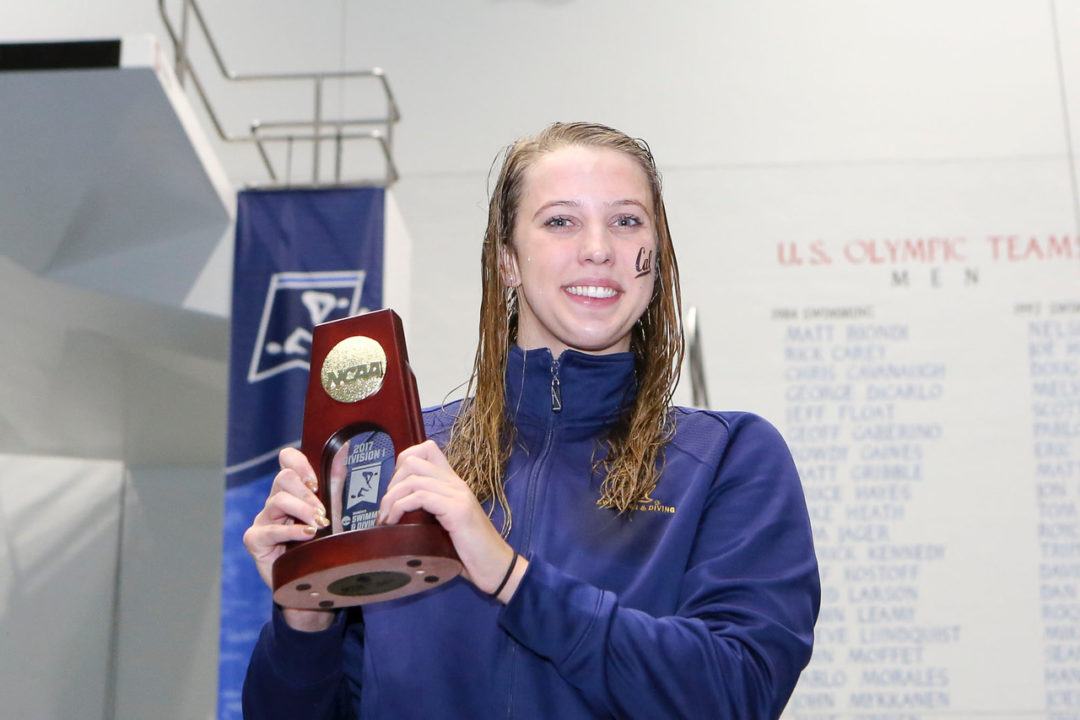 California sophomore Kathleen Baker was named the 2017 CSCAA Swimmer of the Year after winning three individual events and helping the Golden Bears to a 2nd-place finish at the 2017 NCAA Division I championships. Current photo via Tim Binning/TheSwimPictures.com

California sophomore Kathleen Baker was named the 2017 CSCAA Swimmer of the Year after winning three individual events and helping the Golden Bears to a 2nd-place finish at the 2017 NCAA Division I championships.

Baker, the only swimmer to win three events outright, kicked off her individual swims with a 1:51.69 in the 200 IM.  She overcame a stacked field that included Stanford’s Ella Eastin, the fastest swimmer ever in the event.  Baker then doubled in the backstrokes, taking the 100 back in 49.84 (although she swam a 49.80 in prelims), and the 200 back in 1:48.44.

Additionally, Baker was a crucial part of four Cal relays.  She led off Cal’s 800 Free Relay en route to a 2nd place finish, then led off the Bears 400 medley relay.  Her leadoff leg was the 2nd fastest 100 back ever, although Cal’s victory was negated when the relay was disqualified due to an early takeoff.  Baker also had the fastest leadoff leg in the field on Cal’s 1st place 200 medley relay, then wrapped up the meet by helping Cal take 3rd in the 400 free relay.

While Baker had an impressive week, there were definitely other swimmers whose performances certainly received consideration.  Katie Ledecky also won three events, and while she tied in the 200 free with Mallory Comerford, Ledecky did take down a U.S. Open record in the 500 free.  She also won the 1650 free and contributed to Stanford’s two free relay victories.  Simone Manuel and Lilly King each had two individual victories, and each swimmer also set new records in at least one swim.

Baker is the fifth Cal Bear to win the award since it was first given out in 2005.

Baker wasn’t swimmer of the meet, much less swimmer of they year. She may have gotten high point honors at the NCAA DI championship, but had fewer NCAA wins (4 vs 5), fewer NCAA best times of the year (1 vs 5), and fewer NCAA records (1 vs 5) than Ledecky. And none of that includes her 3rd fastest ever time in the 400IM, which she couldn’t swim because of limitations on number of individual events.

While any NCAA win is impressive, Baker’s wins just don’t hold a candle to the impressiveness of Ledecky’s performances. Ledecky’s 15:03 in the 1650 by itself deserves DIvision I Swimmer of the Year for 2017. (Surely, CSCAA isn’t penalizing her for not breaking 15:00… Read more »

Baker scored more points and swam on more relays than Ledecky. Also your last paragraph about the snub doesn’t make much sense. Athletes don’t really care that much about this sorts of awards in my experience

The “more relays” or more points argument for Baker does not hold up. Baker was on one winning relay, Ledecky two. Ledecky significantly outsplit Baker on both of the relays on which both Ledecky and Baker swam, both of which were won by Stanford over Cal. Ledecky anchored the Stanford 800 Free Relay which broke the AR for the second time in three weeks, with Ledecky’s the fastest split on her team. Ledecky outsplit Baker on the winning 4×100 Free relay after breaking the NCAA meet record on the 1650 Free by 20 seconds earlier in the same swimming session.

I like KL not getting it. And I like it being for best swimmer of the meet. Relays matter, and if you win all your individuals and help big on relays, I think it’s a factor.

Feel like the voters might have thought “KL will get if the next 3 years, this is our chance to give it to someone else…” Just a thought. This is the best decision, better than when a most deserving Vlad saw it go to Cordes (great records, but dude only swam 2 indv and 2 relays)

My regret is that NCAA Swimming should be covered on a much bigger scale. The online feeds are insufficient relative to the competition. These folks need a larger audience to showcase the best of the best. This event provided Olympic caliber efforts across the board. Stanford’s overall talent and depth made the difference in their team victory. Kathleen’s health is always predicated on her ability to recover from each event. She’s a winner every time She suits it up. No haters from this party. UB

I would give the award to Simone Manuel. The 50m and 100m free are incredibly important because of the relays. Manuel won both with an amazing record in the 100. She added a third place in the highly competitive 200 free. Balance four more individual points for Baker with Manuel being so important in 4 different relays and I give the nod to Manuel.

Like “How many licks does it take to get the center of a Tootsie Pop?” the world may never know…

Kirsty Coventry’s name is misspelled above!

While Katie L is an awesome swimmer you can’t deny K Baker deserved the MVP this time around. She swims every stroke fast and no one could beat her or TIE her all week. She took down American Record holder in her off event, but hard to call it an off event when she is with in tenths of the American record. Also within tenths of American records in both backs. The USA is in great hands with Both Kathleeen’s for years to come. They are great young ladies and will lead the USA team to Gold and with honor.

I could deny it. The facts are very clear. Ledecky and Baker overlapped on two relays with Stanford winning both, with Ledecky outsplitting Baker on both relays. Baker was on one winning relay, Ledecky on two, both of which were ARs. Ledecky broke her already ridiculously fast 500 Free AR by over a second (in addition to breaking 9 ARs, 12 NCAA records in season, and three pool records at Baker’s Cal pool in season). Baker broke no ARs at NCAAs, or in season, or ever. Prior to outsplitting Baker on the 400 Free Relay, Ledecky broke the NCAA meet record in the 1650 Free by 20 seconds while setting a new NCAA 1000 Free record en route. Ledecky was… Read more »

Thanks, I’ve fixed it. Although, interestingly, that’s how it was spelled on the CSCAA site.

Not a Cal fan but happy for Baker…She totally deserves it IMHO. Performing at this level having Crohn disease is a marvelous achievement… She comes across as a very nice person.

She does seam a very nice person. Very happy for her. Anyone but Lilly King.

This is a tough call, but I thought Katie Ledecky earned it. Yes, there is so much talent to choose from! But if we were picking teams, I’m pretty sure any captain would pick Ledecky first. In her events, she is a guaranteed victor. And she does have an ever expanding event menu. She has every option available in her swimming and life path, and I think we are all lucky she decided to swim in college. If I had to give this award, I would have chosen Katie. Not even close. She did help her team win the whole thing, after all. But Baker was impressive, particularly winning the IM outside of her ‘specialty’. In fairness, Baker did step… Read more »

As for the “guaranteed victor” part — did you not see the 200 free results?

Baker scored more indv. points than Ledecky did (60 vs. 58.5). And she swam 4 relays to Ledecky’s two. If we’re voting on GOAT swimmers, Ledecky would trounce anyone else at this meet. But for swimmer of THIS meet, Baker is a good choice.

“But if we were picking teams, I’m pretty sure any captain would pick Ledecky first. In her events, she is a guaranteed victor. And she does have an ever expanding event menu. She has every option available in her swimming and life path, and I think we are all lucky she decided to swim in college.” What the heck does this after to do with selecting swimmer of the year? Perhaps if the favorite Eastin had won the 200IM or the favorite Ally Howe had won the 100Bk then Ledecky would have gotten the award. It’s all shoulda, woulda, coulda…but didn’t!

Not a good or fair call in awarding Baker IMHO. Ledecky had three individual wins at NCAAs, an incredible individual American record, two individual NCAA records, lapped almost entire field in 1650 Free, was huge part of two American-NCAA record relays both of which beat Baker-Cal relay squads, and KL showed her range when both she and MC both had to give their all to beat the world’s best SCY sprinter, Manuel, at quick 200 Y Free distance. Ledecky arguably had the best NCAA season EVER by a female swimmer, in addition to five wins af NCAA meet, Ledecky had almost a dozen in-season NCAA-American record swims even in off events like 400 IM, quietly inspiring and contributing to bringing… Read more »

I’m not arguing that KL didn’t deserve the award too but more or less commenting on portions of Jonathan’s reasoning that didn’t make sense. Also bringing up the fact that if the favorites, Ella or Ally had won their respective events then there wouldn’t even be this discussion. At this time he just sounds like a homer which he is!