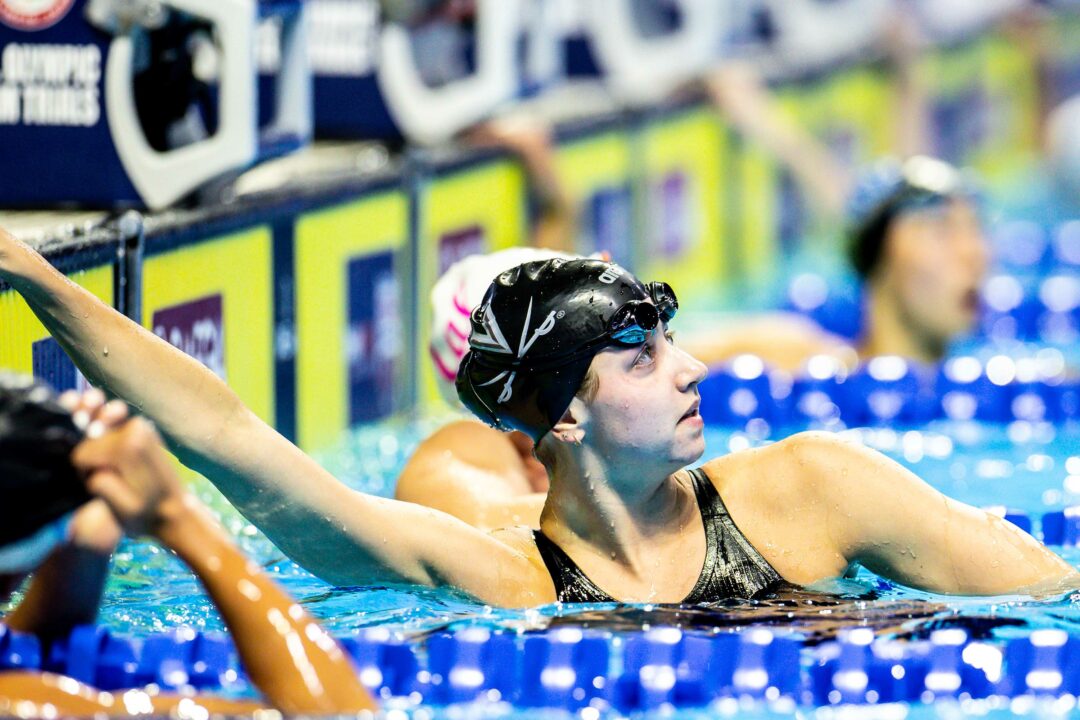 Kate Douglass had the slowest backstroke leg of the 200 IM final at the Olympics, but a new personal best on Friday shows that she's working on that. Archive photo via Jack Spitser/Spitser Photography

Panama City Swim Team’s Luke Maggiore, a rapidly-improving breaststroker, has announced his intention to swim for the FSU Seminoles next year.

Suburban Seahawks’ Lainey Mullins has verbally committed to UVA for the 2023-24 school year and beyond.

UVA hosted UNC on Friday, January 21st in a co-ed dual meet. This used to be the most-heated rivalry in the ACC, though some of that intensity has waned in recent years as NC State and Virginia have battled for conference titles.

The UVA women are coming off of a win over rivals Virginia Tech last weekend. UNC had their meet against NC State postponed last weekend due to COVID-19 protocols.

The UVA women cruised to a 168-126 victory over UNC. The UVA women won 10 out of 14 events, and they exhibitioned races after the 100 butterfly.

For the versatile Douglass, who is the defending Olympic bronze medalist in the 200 IM, that time in the 100 back is a new personal best. It drops half-a-second off her old best time of 52.39 that was done on a relay leadoff against UNC two seasons ago: a meet with similar timing.

While Douglass rarely swims backstroke races on taper, she continues to show off an incredible versatility that makes her arguably the most valuable swimmer in the NCAA. Improvements in her backstroke races makes her international prospects even scarier: at the Olympics, the backstroke leg was her biggest weakness. Her split in the final was 33.93. That’s as compared to 32.68 for her teammate Alex Walsh who got silver, and 32.50 for Japan’s Yui Ohashi, who took gold.

In fact, Douglass had the slowest backstroke split in the final by more than four-tenths of a second.

Her time from Friday morning ranks her 15th in the NCAA this season Only her freshman teammate Gretchen Walsh (50.89, 51.12, 51.15) and World Record holder Maggie MacNeil (51.46) have been faster in dual meets this season.

UVA also went on to sweep the 100 breaststroke. Junior Kate Douglass won the event in a time of 59.48. This was her fastest dual-meet swim in the event of the season so far. Senior Alexis Wenger earned a second place finish with a time of 59.73. Wenger finished third in the event at the 2021 NCAA Championships with a time of 57.67. Sophomore Anna Keating finished off the sweep swimming a time of 1:01.64. This was almost a second faster than last weekend for Keating as at Virginia Tech she went a 1:02.59.

Senior Sophie Lindner picked up another win for the Tar Heels winning the 200 backstroke in a time of 1:56.11. That ties her season best which she swam at midseason. Lindner swam a time of 1:52.69 in the event at the 2021 NCAA Championships to earn her a 13th place finish.

Other first-place finishes include:

WHY are you writing about 10:18’s in the 1000 free? Thats not even a winter junior time. So many others that you could be promoting like Bathurst or Tillman…And, why didn’t the silver medalist, Weyant, go for the 400IM record?

NCAAs are going to be SO GOOD this year! Can’t wait.

Kate is phenomenal. So fun to watch her swim. The Tracey Caulkins of 2022!!

why does this have so many downvotes??

Kate Douglas is no Tracy Caulkins. Not even close.

True. Caulkins was a multi-generational, all-time talent. Probably the most versatile swimmer next to Phelps the planet has ever produced. Maybe the most versatile period. 63 frickin American records, including 100 free, 500 free, 100 breast, 200 breast, 200 back, 200 IM, 400 IM, and won the 200 fly at NCAAs. So the best U.S. woman in an event in every stroke. Kate is a generational talent. That’s not too shabby.

Why so many exhibition races?

College coaches often do this to artificially keep team scores close. At some point, long before my time, swim coaches collectively decided that this was the definition of “sportsmanship.”

Except for that one time a team exhibitioned their way to a loss. I’m positive that isn’t “sportsmanship.”

What was “that one time”?

Thanks! Does that mean any cuts they get in those races wouldn’t count?

Liz – the cuts should stand whether or not the races were exhibitioned.

I really hope Kate swims the 200 breast at NCs, I bet she could take down King’s record. By a lot. They can put Gretchen in the 100 free, though I think there is a case to be made for Gretchen to swim 5 relays due to how valuable she is and the loss of Madden and Valls on the 800, I think Gretchen has been 1:43 and I’m sure she could bring that down.

We haven’t seen anything suggesting Walsh and Huske are headed for 45 low.

I don’t think it’s a good case. In a very generous scenario having GW on the 800 free relay moves them up from 3rd to 1st. That’s 8 points difference. Versus even just finishing 5th in a 3rd event is 14 points. Likely having GW on that relay improves their time by 1-2 seconds and doesn’t affect their place more than one spot, maybe not at all.

The 2 individual, 5 relay event situation only works when the swimmer doesn’t have a strong 3rd event or the team doesn’t have depth. Neither are true in this situation.

I think their coaches may have possibly undermined her 200 breast as her best. She was so versatile that her 2:03 seemed just like the rest but since then I think it’s shined through to be, now, the superlative of her repertoire. I think she needs to be built up as a 200 breaststroker and less of a sprint freestyler even though of course her sprinting ability is second to none.

I have to say Douglass throws down killer swims rested or unrested but the no suit thing…ya wow.