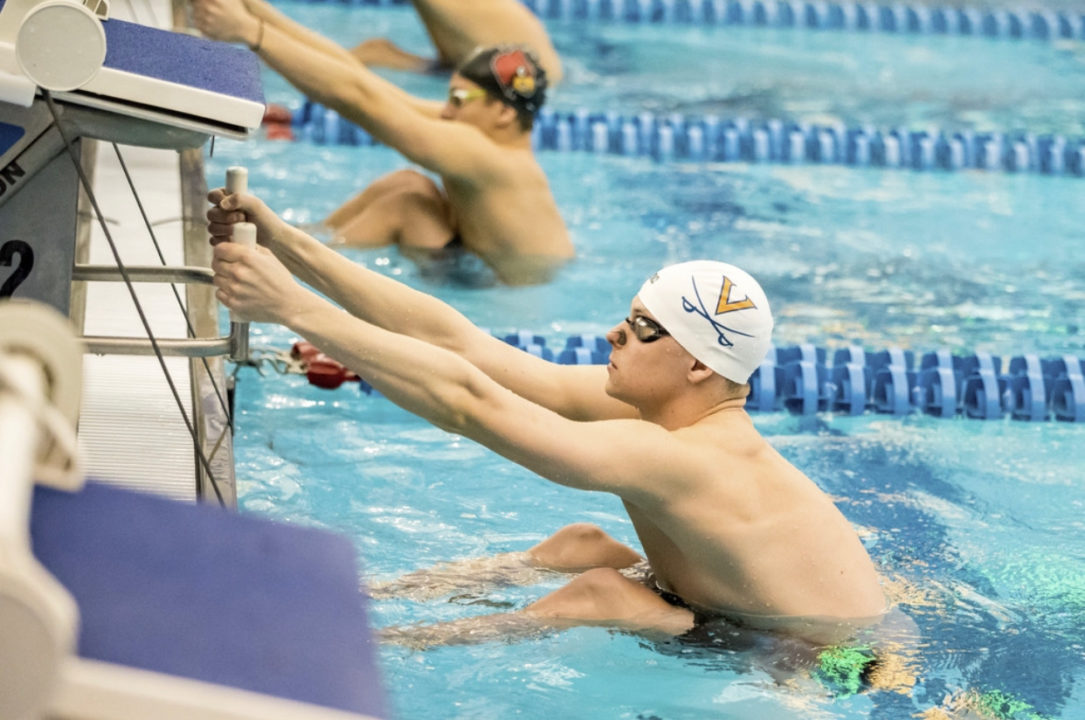 The No. 18th ranked Virginia men took on the UNC men at home today and both teams produced some fast results with Virginia winning 171 to 124. Archive photo via UVA Athletics

The No. 18th ranked Virginia men took on the UNC men at home today and both teams produced some fast results. Ultimately, Virginia got the victory, winning with a score of 171 to 124.

Virginia kicked off the meet with a victory in the 400 medley relay, where the team of Justin Grender, Noah Nichols, Max Edwards, and Matt King touched in a time of 3:10.01, taking down the field by over 2 seconds. Both Nichols on the breaststroke leg (52.52) and King on the freestyle leg (42.93) saw huge splits to solidify the victory.

UNC immediately fired back in the 1000 freestyle, where sophomore Patrick Hussey out-touched UVA’s Peter Thompson for first place with times of 9:24.03 and 9:24.27, respectively. Later in the day, Hussey picked up his second victory of the day, winning the 400 IM in a time of 3:53.78.

The sprint freestyle events were led by the UVA “Matts”, as Matt Brownstead and Matt King each picked up a victory. Brownstead struck first, hitting the wall in a time of 19.75 to take the 50 freestyle ahead of King’s 19.97. Later, King managed to touch first in the 100 freestyle, touching in a time of 43.95, with Brownstead finishing 3rd in 44.90.

With Virginia swimming exhibition in the 200 freestyle relay, UNC closed the meet with a victory, as the team of Thomas Sungalia, Tucker Burhans, Donovan Lahmann, and Boyd Poelke combined for a time of 1:21.29.

On the diving boards, UNC saw double victories from Anton Down-Jenkins as he took the 1 meter in a score of 386.85 and the 3-meter event with a score of 418.58.

Following their victory, the Virginia men will face off against No. 3 NC State tomorrow at home, while the UNC men’s next meet is set for January 28 at Duke.

Forgot to mention it was a beatdown

Is Jay Baker injured? Haven’t seen him on the UNC roster since October.

He quit the team

He entered the transfer portal a few months ago