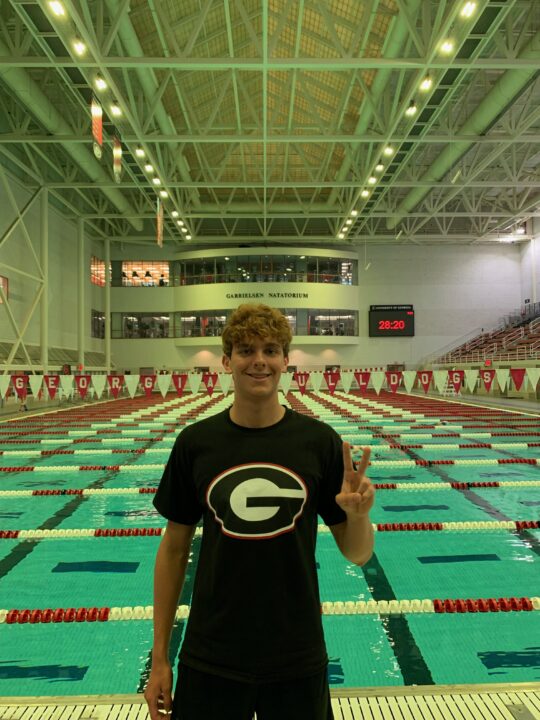 Tristan DenBrok will be staying close to home when the freestyle specialist from Suwanee, Georgia, joins the Bulldogs on campus in the fall of 2023. Current photo via Courtesy of Tristan DenBrok

The University of Georgia landed a commitment from one of the top juniors in the state.

Tristan DenBrok will be staying close to home when the freestyle specialist from Suwanee, Georgia, joins the Bulldogs on campus in the fall of 2023. DenBrok recently rose to No. 19 on the latest Class of 2023 recruits list after winning two state championships and qualifying for Junior Nationals this spring. Ben Irwin, a club teammate of DenBrok’s on SwimAtlanta who is verbally committed to Georgia Tech, is the only fellow Georgian ranked higher at No. 17.

A 17-year-old junior at North Gwinnett High School, DenBrok captured county and state titles in the 200 and 500 free. He was the first swimmer in school history to win multiple state titles as his Panthers beat out the biggest schools for the Class 7A crown at February’s GHSA 6-7A State Championships. A month later, he set eight personal bests at Cary Sectionals in March, including a Junior Nationals qualifying time of 1:36.72 in the 200 free. In the 500 free, DenBrok clocked a 4:19.65, five seconds faster than his previous best from just a month prior. A massive time drop is likely whenever he next swims the 1650 free, which he hasn’t swam since December of 2021.

The question going forward is whether DenBrok will gravitate upward toward the mile or downward toward the sprints, where he went 45.39 in the 100 free in March. One indicator might be his 8:58.72 in the 1000 free from March – a 26-second improvement over his previous best – which is only a second behind the top time in his class belonging to Florida commit Andrew Taylor. The 1000 free isn’t an event at the Division I NCAA Championships, but it is swum instead of the 1650 in many Division I dual meets.

Georgia is coming off a successful season in which the men placed 8th at the NCAA Championships following a fourth-place finish at the SEC Championships. With more than a year still remaining to develop before arriving in Athens, DenBrok’s best 500 free time would have already put him in the ‘B’ finals at this past SEC Championships. Georgia freshman Matt Sates and sophomore Jake Magahey placed first and third in the event, respectively. In the 200 free, DenBrok’s best time would have barely missed the ‘C’ final. Sates also topped the podium in the 200 free at the SEC Championships before going on to win the NCAA title in the 500 free. However, the South African phenom turned pro soon after, leaving the Bulldogs with a hole to fill in the wake of his three-month college career.

DenBrok is the second announced commitment in his class after Jack Moloney, a versatile swimmer who figures to join the Bulldogs’ IM group.

I think in general it’s the lack of concentration, plus the purpose of the meet. High school swim culture varies so much from state to state. Some are in the middle of a HS season that they care about in December, some are looking for a mid-season taper before a May State Championship, some just don’t care about their HS seasons at all, some clubs want to keep kids closer to home because of academic schedules and so they go to other meets.

Summer Juniors, on the other hand, everyone is at home, most aren’t in school, everyone’s ‘season’ kind of ends at the same time, at the end of the summer, so it’s a bigger aggregation of talent.

I VERY much appreciate this thorough reply Braden! All of these reasons make sense, & I like the idea of stepping stones, thank you for sharing.

We don’t have high school swimming in Vermont so I don’t usually give that much thought.

We might have some girls qualify in the near future also. 4 swimmers (currently 13-14) moved to Vermont in past 2-years & all joined the Upper Valley Aquatic Club (White River Junction, VT). They came from:
– Ghana (I think)
– MA
– CT
– CA