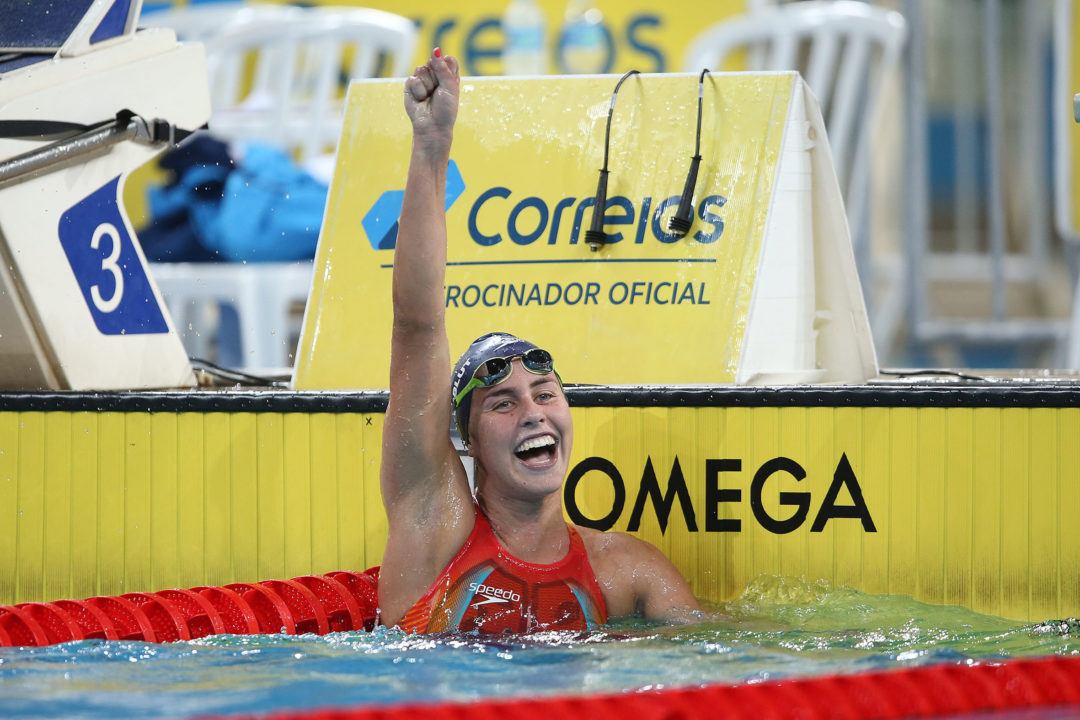 After testing positive for coronavirus on the eve of the Brazilian Olympic team trials, Viviane Jungblut swam to a new national record in the 1500 free. Archive photo via Satiro Sodre/SS Press

After testing positive for coronavirus on the eve of the Brazilian Olympic team trials, four of the country’s top swimmers took to the pool in a time trial meet, which resulted in one new national record.

At the original trials meet in April, Viviane Jungblut saw her 1500 freestyle national record fall at the hands of Beatriz Dizotti, who won the event in a time of 16:22.07 to qualify for Tokyo. Betina Lorscheitter also got below the FINA A-cut in the event at the Brazilian Olympic Trials with her performance of 16:27.73 and after the scratch of Ana Marcela de Cunha, who originally finished second at trials but scratched to focus on open water.

In order to qualify for the Olympic team, Jungblut had to beat Lorscheitter’s time, which would bump her out of the second spot. Entering the event alone today, Jungblut demolished the standard to make the Olympic team, surpassing both of her competitors. With her performance, she posted a new Brazilian National Record of 16:14.00, knocking over 13 seconds off of her own best time in the process.

Jungblut is also slated to swim the 800 freestyle later in the meet, where the Olympic qualifying standard stands at a 8:33.36 as there are currently no other swimmers qualified. Considering her time in the 1500 today, where she split 8:39.50 at the 800m mark of the race, Jungblut looks poised to add a second event to her schedule in Tokyo.

Alexia Asuncion and Maria Luiza Pessanha also competed during the finals session, swimming the women’s 100 backstroke. After qualifying for finals with times of 1:04.60 and 1:06.53, respectively, both swimmers saw drops in finals as they touched in 1:04.43 and 1:02.69. However, neither swimmers beat the Olympic selection time of 1:00.25.

During prelims, Vinicius Assunaco raced the men’s 200m freestyle in an attempt to earn both a relay and individual spot for the Olympic team. However, his time of 1:50.36 failed to surpass the standard of 1:49.34 that was required to make the final at the original trials meet, preventing him from racing the event again at night.

Although I feel bad for Lorscheitter, it’s not even worth pulling the “different conditions” argument with that big of a margin.