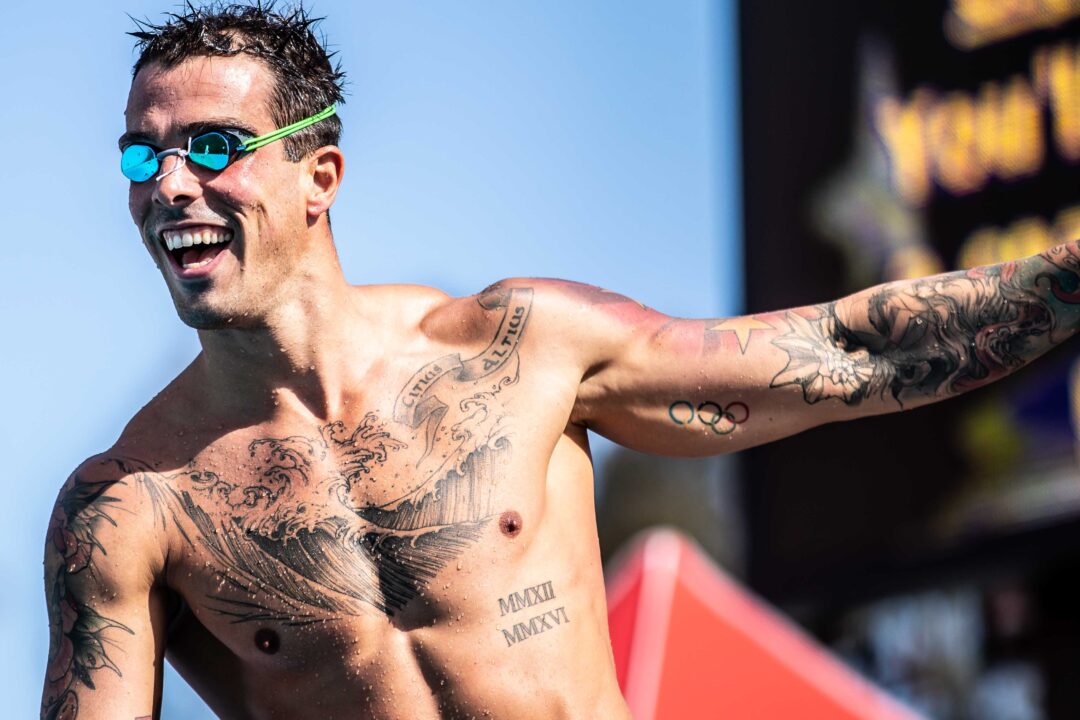 Bruno Fratus (above) has been named to Brazil's initial Olympic roster after swimming a special trial in California rather than the country's primary qualifying meet. Archive photo via Jack Spitser/Spitser Photography

The CBDA, the governing body for aquatics in Brazil, has confirmed its initial roster for the 2021 Olympic Games. This initial roster is made up of 18 roster spots that are “guaranteed” according to the CBDA.

“We have a strong roster. That was our aim from the beginning. Having the best roster and not necessarily the largest roster. We are confident that this team can do well at the Tokyo Olympics,” said CBDA vice president Renato Cordani.

While the release is confusing, it seems that the 18 names aren’t guaranteed, just their roster spots.

That differentiation becomes important in the case of the women’s 1500 free, which saw three swimmers under the Olympic “A” cut at Trials, plus another with the same potential still to come. The current list includes both the winner of the women’s 1500 free, Beatriz Dizotti, and the third-place finisher Betina Lorscheitter, both of whom were under the FINA “A” standard. The 2nd-place finisher Ana Marcela de Cunha declined her spot to focus on open water, where she’s a gold medal contender.

Lorscheitter’s position is dependent on Viviane Jungblut, the previous National Record holder, who will race at the June 12 makeup meet for her and 4 other swimmers who tested positive for COVID-19 before last week’s trials. She’s also swimming for a spot in the 800, which doesn’t have any entries yet.

The CBDA says they may add names based on that time trial. That also becomes relevant in the 400 and 800 free relays, where Vinicius Assuncao, a young Brazilian with a lot of upside, will also race on June 12. The men’s 400 free relay is very uncertain for now – after the winner of the 100 free was disqualified for a pre-meet doping violation, the 9th-place finisher got a re-swim and jumped a bunch of other swimmers who did race in the final. But now that result too is being protested, so the CBDA will have to sort that out in the next few weeks before Assuncao swims.

Among the guaranteed athletes is Bruno Fratus, who swam his official Olympic Trial in the 50 free in the United States earlier this month. Racing at the Pro Swim Series meet in Mission Viejo, Fratus raced to a 21.73. With no other swimmers under the FINA “A” cut, the CBDA put the defending Worlds silver medalist on the roster. Fratus is based in the United States

The list also includes names of those swimmers who are tentatively chosen for Brazil’s “Wild Card” relays, which will not be confirmed until the qualifying period closes in June. As of now, that includes all three women’s relays and the mixed 400 medley relay.

As part of the official ceremony appointing the teams at the Maria Lenk Water Park, the CBDA brought in Gustavo Borges and Joel Jota to speak with the qualified athletes.

Do Brazil have a Women’s 4x100m medley team?

She is probably the greatest Open Water swimmer that never got an Olympic Medal.. (Men and Women combined)

Is Cielo still swimming? I can’t exactly tell from his Instagram

Has Cesar Cielo retired? He’s posting a lot of training on his social media though…

Is Marcelo Chierighini not clearly designated yet?
Isn’t that a bit odd? Esp. for such a medal contender?

I think that the Brazilian 400 free relay will race for sure at Tokyo but, as written in the article, there’s still something to clarify after what happened in the 100 free. For now the quartet would be Spajari, Santos, Chierighini, Correia, with Fratus possible addition.