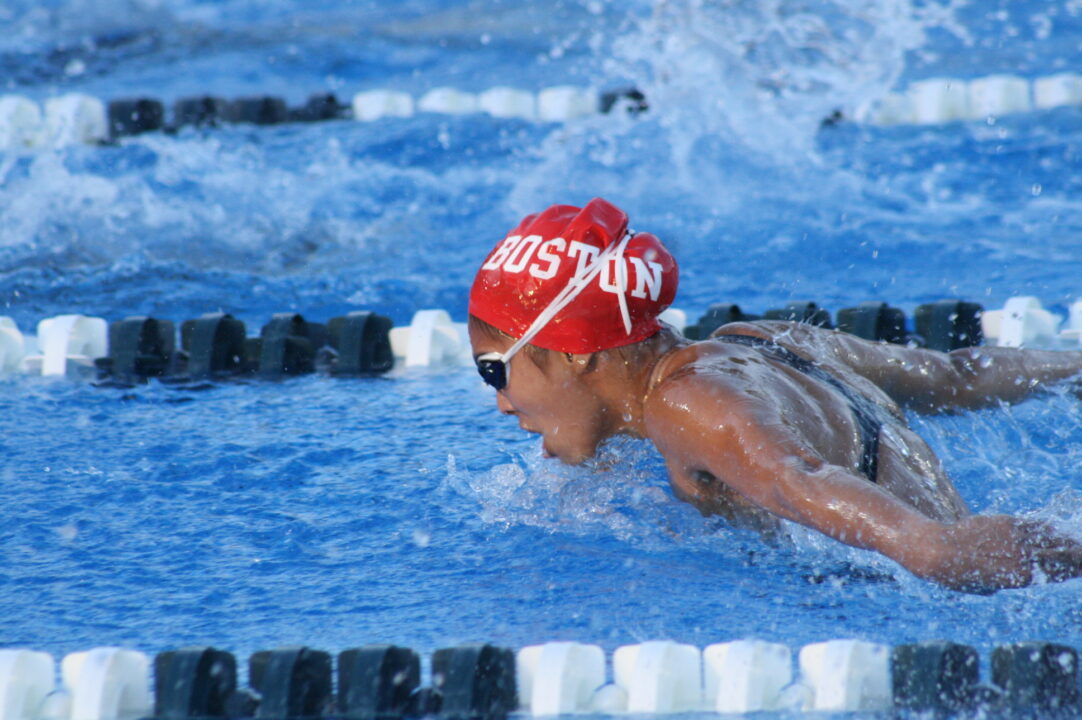 Julimar Avila made history on Tuesday evening in Japan when she became the first swimmer in her country's history to advance at the Olympics. Archive photo via Nicole Miller/SwimSwam.com

Honduran swimmer Julimar Avila Mancia has become the first-ever Universality swimmer and the first-ever Honduras swimmer to advance out of the preliminary rounds of the Olympic Games after placing 16th in the 200 fly.

She swam a 2:15.36 in the heats, which broke the National Record set by Michell Ramirez in June of 2021 in the event. Though Ramirez had a better time than Avila, Ramirez’s swim came after the Universality application deadline, and Avila had the faster time as of June 21, when Universality nominations were due.

Avila made the most of her opportunity, taking over 3 seconds off her entry time of 2:18.38 and almost 2 full seconds off Ramirez’s Honduras Record.

While Avila was still 3 seconds behind the 15th qualifier, former University of Texas swimmer Remedy Rule (2:12.23), because Katinka Hosszu no-showed the event, there were only 16 entries. FINA never responded to whether they would hold preliminary rounds with only 16 swimmers, but Hosszu’s late decision to scratch didn’t leave them with much option other than to proceed.

Incidentally, Rule’s time makes her the first Philippines swimmer to ever advance beyond round 1 of an event at the Olympic Games as well. 14th-place qualifier Ana Monteiro becomes her country’s first ever female swimmer to advance from prelims in any Olympic event,

Honduras has been competing in swimming at the Olympic Games since 1984, but have previously never had a swimmer advance in any event. The country’s previous highest finish in an individual event at the Olympics came from Claudia Fortin, who was 22nd in the 800 free at the 1992 Summer Olympics.

Avila swam collegiately at Boston University from 2015 through 2019. As a senior, she finished 7th in the 200 fly at the Patriot League Championships and was a member of the winning and school-record-setting 400 free relay.

“Universality” is the program by which FINA allocates Olympic qualifying spots to countries that haven’t had any swimmers hit Olympic qualifying times. Countries without an invited swimmer can invite up to 1 male and 1 female swimmer. Normally, these athletes must have competed at the prior World Championships, though that rule was suspended this year because of the delay in the Olympics caused by the coronavirus pandemic. Instead, countries were instructed by FINA to select the swimmers with the best swims by FINA power points – though we know that globally, this was not accurately applied in many countries.

It’s kind of hard to understand why there were so few entries in the women’s 200 fly. Maybe the A qualifying time was tougher, relatively speaking, than other events? Or maybe it’s a statistical fluctuations?

I think it’s just not an event many countries put emphasis on for their swimmers, especially knowing that the Chinese & Americans consistently make up half the final anyways

Universality swimmer Kotryna Teterevkova of Lithuania placed 14th in women’s 100 breaststroke semi-final. That event had 40+ entries. She’ll swim 200 breaststroke too. She had B cuts in both events. That’s another level of “universality”, I guess 🙂

Given that she’s swimming two events, she’s not a Universality swimmer.

The selections aren’t super transparent, and the difference between “only swimmer in my country with a B cut but it wasn’t invited” and “Universality” aren’t super clear, but true Universality swimmers are only allowed one event.

Great accomplishment for her to make the semifinals none the less!

Go Julimar! That’s a very legit time drop and shows how far you can go as a universality swimmer. Woooo!

I mean, congrats to her, but this isn’t exactly much of an accomplishment considering literally all she had to do was show up to the race. But that just speaks to the sad state of the W 200 FL at the moment, and hey, I’ll never make an Olympic semi.

So you’re saying that if I invent my own country, I could represent it if invited? Sweet

Not really, the country has to be recognized by some international instances. Look at Taïwan having to be the “Chinese Taipei Olympic Commity” (or something like that) even though they’re a really real country. Would love to see some Vatican swimmers though

I actually go to Mass, so I think I have Vatican citizenship. But since I’m now over 50, I would set an age OLDEST and be very slow. Maybe I’d go for the 400m Free.

If you get in as a Universality swimmer, can you only swim the event in which you have the most FINA points, or once you get in, can you swim multiple events?

Only the one they invite you for I beleive.