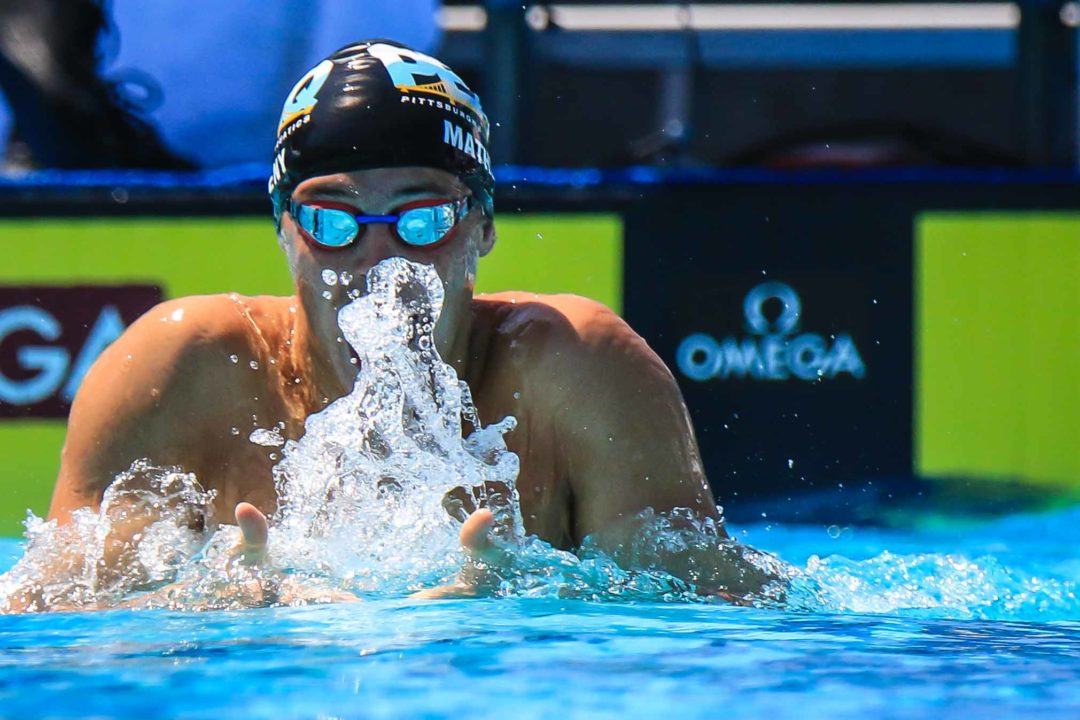 Josh Matheny added a top-10 swim in the 100 breaststroke to his lifetime best in the 200 breaststroke from Thursday in Carlisle, Pennsylvania. Archive photo via Jack Spitser/Spitser Photography

The meet was originally scheduled to run from Friday through Sunday, but the state of Pennsylvania announced on Thursday new protective orders that halt all youth sports in the state beginning Saturday until January 4.

A three-day meet that was compressed to 2 after Pennsylvania ordered all youth sports within its borders to be halted as of Saturday, there were 4 sessions (2 for boys, 2 for girls) on Friday.

In the 100 breaststroke, he posted a 52.02. That moves him into a tie with former Duke standout Peter Kropp as the 8th-fastest swimmer in USA Swimming age group history in that event.

Matheny, who swims for Pittsburgh Elite Aquatics, is committed to swim at Indiana next fall. He’s also a member of the USA Swimming National Team and won the 200 breaststroke at the 2019 World Junior Swimming Championships.

Butera was faster than Matheny on 3 of the 4 legs, including by substantial margins in the backstroke and freestyle legs, but Matheny’s specialty of breaststroke made the race competitive. The table below shows how far the race swung on the breaststroke leg.

D’Ariano had a breakout meet last weekend that saw him earn his first two Junior Nationals cuts in 1650 free and this same 400 IM. His 3:56.44 from last week was replaced by his 3:54.64 swim on Friday as a new personal best and ranks him as the top 15-year old in the event in the country this season.

Congratulations to 15-year-old Landon D’Ariano, from Germantown Academy on following up from last week’s breakout performances with another great weekend of swimming. The Germantown swimmers and coaches are doing an awesome job and are going to really be a program to watch in the next couple of years.

Missing caspar corbeau’s 51.46 at the Minnesota Invite in December 2019.

Congrats to all swimmers! 14 years old boy Jake Wang of Suburban Seahawks posted an impressive 56.77 in 100 breaststroke. That should be the national no. 1 time for 13/14 boys this season in this event. Probably rank him within top 20 all times.

That’s an incredible time for a 14 year old! Swimswam should’ve reported this as well.

Congratulations Matheny on some GREAT swims, and to the other swimmers with fast times during a very strange year!

Rarely do I think or say this, but I believe it’s worth a shout out here. A MEGA KUDOS goes out to both the MA Executive Director (Jamie Platt) and the Meet Committee for pivoting quickly to change the meet from: (a) “3-day, prelims/finals” to (b) “2-day, finals only, starting one day earlier”, so that these swimmers can compete before the (double standard) restrictions implemented by the Commonwealth’s Dictator became effective….AGAIN!!