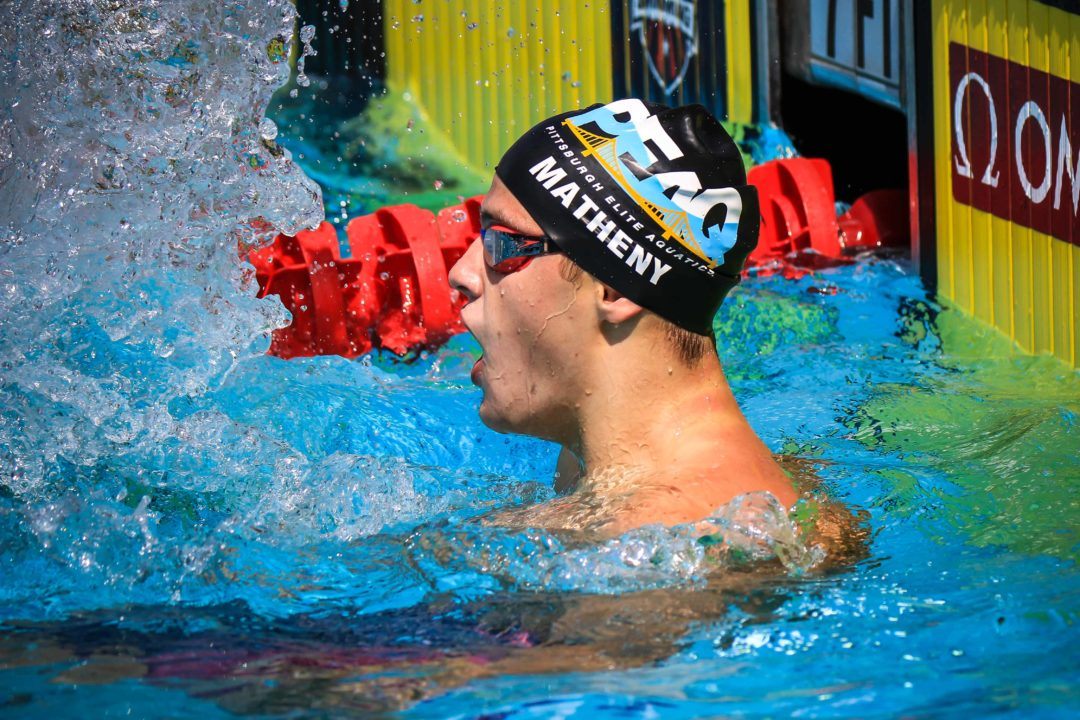 Mark Spitz to be a featured medalist in Olympic Channel docu-series, “’72: A Gathering of Champions”, a celebration of 50 years the since Munich Games

The meet was originally scheduled to run from Friday through Sunday, but the state of Pennsylvania announced on Thursday new protective orders that halt all youth sports in the state beginning Saturday until January 4.

Swimming in Carlisle, Pennsylvania, Matheny on Thursday evening swam 1:51.38 in his best event. That cracks the National Age Group Record of 1:51.43 that was set by fellow Pennsylvanian Reece Whitley at the 2017 Winter National Championships.

Matheny’s previous best time of 1:52.12 ranked him 5th all-time in the age group. That swim was done at the Winter Juniors – East Championships last December.

The swim also makes Matheny the top swimmer so far in USA Swimming’s open-site 18 & Under Winter Championships meet, which counts all times by eligible athletes from December 1 through December 13 in its championship rankings.

Matheny, the #3 recruit in the high school class of 2021, is heading to breaststroke powerhouse Indiana University next fall. He represented the United States at the 2019 World Junior Championships, where he won gold in the 200 breaststroke and silver in the 100 breaststroke in long course meters.

His was one of a number of standout swims in a fast session in central Pennsylvania on Thursday.

Other Day 1 Highlights from Carlisle:

The 2022 class includes juniors, not sophomores 🙂

The folks at Keystone Aquatics did an incredible job making a quick change in plans since Gov Wolf gave a days notice on closing the state. All races are now timed finals and squeezing entire meet from 3 days into 1 and a half. Talking to the people running the meet they truly love the sport of swimming. Nice to hear how their club swim team numbers are growing rapidly and with their leadership I can see why.

A huge shout out to Keystone Aquatics and Mid Atlantic Swimming! They are doing a fantastic job running a meet under very difficult circumstances. We are very appreciative they included us in the meet. Josh wouldn’t have been able to swim this weekend without all of their help. Thank you!

Wow! Congrats to Josh! The IU Hoosiers are really looking forward to seeing you in Bloomington soon! Keep up the fast swimming!

Josh and The GOAT, Ray Looze, will be match made in heaven (Bloomington). Remember my young friend, Blue Gatorade, always “love the GOAT”, “honor the GOAT” and “cherish the GOAT” and you will live a full, happy and successful life!

Fastest person I’ve seen with his stroke rate. He’s able to keep a high tempo the entire race in both the short pool and the long pool