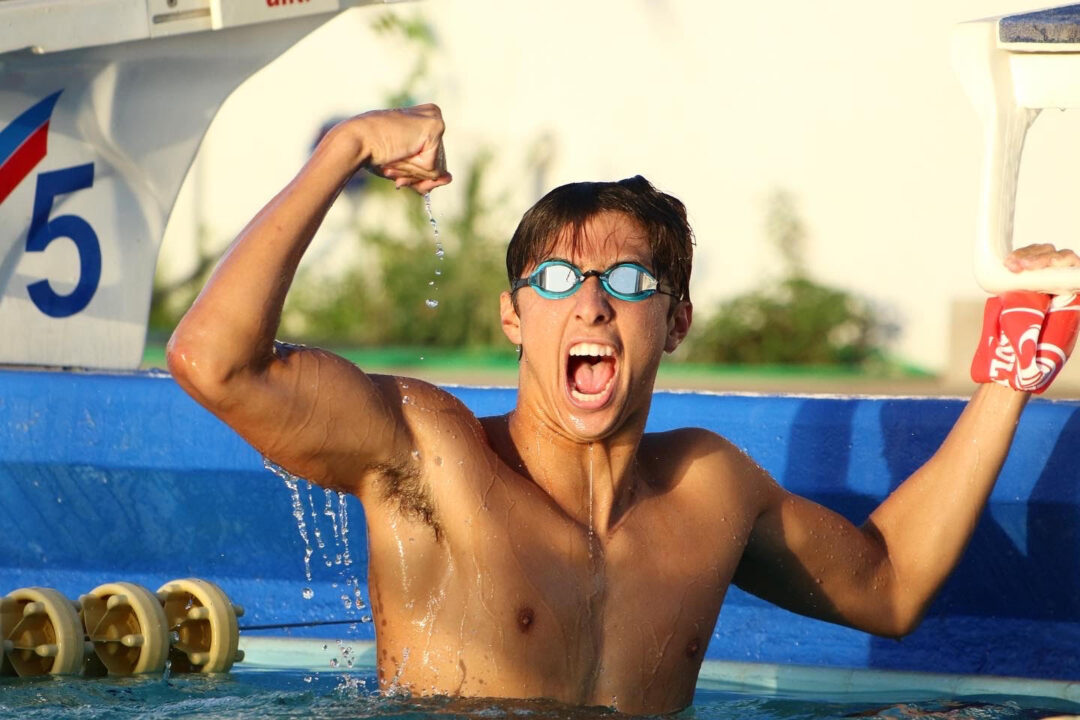 With exactly one week left to qualify for Trials, Aulea Swim Club’s Jon Reiter scored his first-ever Olympic Trials cut in the 100 breaststroke.

Reiter blazed in to finish at a 1:03.19, dipping under the Wave I Trials cut by one-tenth of a second and improving .38 upon his entry time of 1:03.57, which he swam in late March at the ISCA International Senior Cup.  Later in the meet, Reiter was scheduled to swim the 200 breast, but scratched after securing his Trials cut in the 100. To conclude the meet, he helped lead Aulea Swim Club to a victory over Iolani in the 400 medley relay.

Reiter was the only swimmer in the meet to crack the 1:10 barrier in the event. The rest of the competitors in the event were spread out by multiple seconds, with Iolani’s L.T. Stancil touching in second with a 1:10.17 and Aulea’s Jeshua Grose in third with a 1:19.58.

With Reiter’s qualification, Aulea Swim Club will be taking two swimmers to Trials in June. Reiter will join his teammate Tom Caps at Wave I of Trials, who is also qualified in the 100 breast. As a reminder, Wave I will begin next week on June 4th.

Also from Aulea Swim Club, James Lyon snagged his first Summer Juniors and US Open cuts in his 100 fly. Lyon finished at a 55.99, shattering the 56-barrier for the first time and dropping a full second. His swim was over nine seconds faster than the second place finisher Tobey Yuen, who touched in a 1:05.07. Next fall, Lyon will head to the Naval Academy to continue his swimming career.

In the aforementioned 400 medley relay, the Aulea men took the final victory over Iolani in the 400 medley relay. They won by a large margin, finishing over 30 seconds ahead of Iolani’s men. Zach West kicked off the relay with a sub-minute 100 back (59.31), lowering his previous best time of 1:00.03 set at the Hawaii KSC Senior Extravaganza by nearly .7 seconds. Caps, Ryder, and Lyon completed the relay, which went on to break the Hawaiian Open record of 3:54.25 set in 2018. Their time of 3:53.17 shattered the record by over a second.

On the women’s side, UCSD commit Alana Barthel impressed in the 100 backstroke, lowering her entry time by two-tenths and winning the event by over nine seconds. The time qualifies her for the 2021 Speedo Summer Championships (18&U). She was also entered to swim the 200 backstroke, but scratched.

According to Joseph Glenn, head coach of the Aulea Swim Club, his club (and many others, of course) faced several challenges during the peak of the pandemic, notably the struggle for pool time. Due to COVID restrictions put in place by the Hawaiian government, the Aulea swimmers had to bounce around the island of Oahu for 10 months looking for pool space before finally returning to their home pool in April. Since being back on their own turf, the club has qualified two swimmers for the Olympic Trials.

However, the tight COVID restrictions are still hindering Hawaii swimmers more than most others around the country. The format of the Dual Series was put in place because the island of Oahu only allows two teams at a time to swim in a meet. Thus, several small dual meets were held in lieu of any invitational-type meets.

Awesome! Hope he is leading many others to qualifying this weekend!!!

What a rush. Congrats on your qualification!

CHEE-HOO!! Congrats John from #iolaniswimclub and ‘Iolani Ohana!! You are such a great role model to the younger swimmers! Good luck next week! Look for the paper cut out of Evan in the stands if you can find him!!
We’ll be watching! Sorry you’ll have to miss your graduation ceremony.