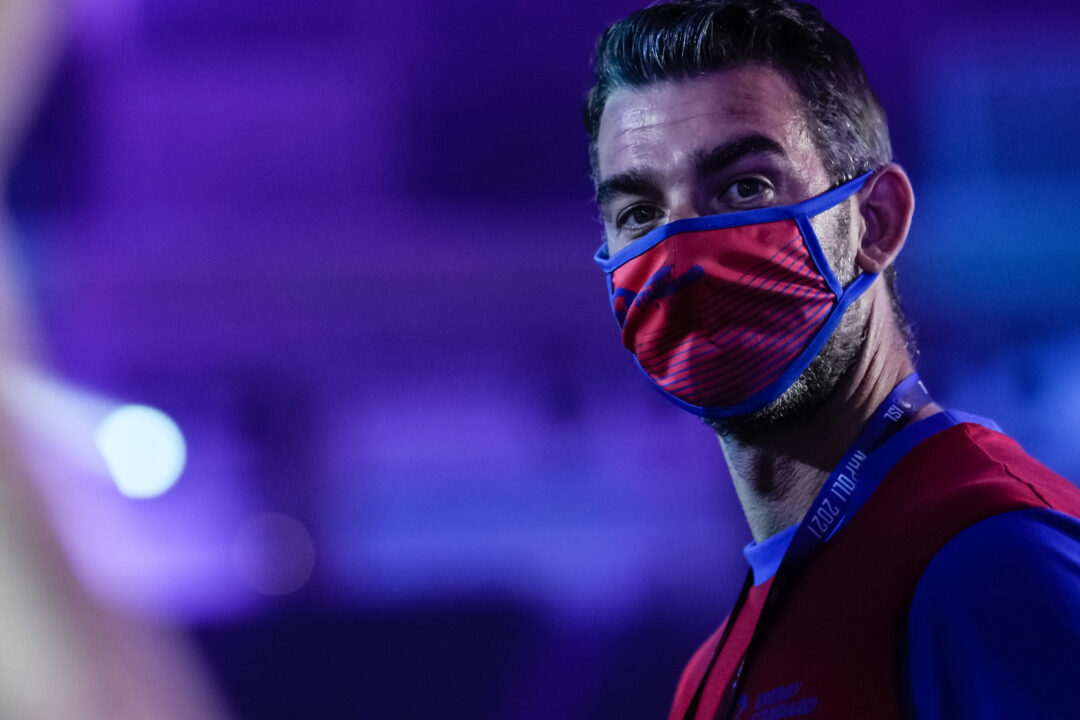 Energy Standard head coach James Gibson said he was "not a huge fan of that scoring system" when discussing jackpots during a mid-match interview. Current photo via Mike Lewis/Ola Vista Photography

James Gibson didn’t mince words when he spoke about the impact jackpots were having on the scoring during Match 8 of the International Swimming League (ISL) over the weekend.

Gibson, the head coach of inaugural league champion Energy Standard, voiced his displeasure for the jackpot scoring system during an on-deck interview midway through Day 1 of Match 8 with the ISL’s Mark Foster.

“Every team gets a little bit frustrated when they just miss those touches, you’re seeing the power of the jackpot,” Gibson said. “We get a touch, we’re 20 points up, and then Alia Atkinson just touched out Benny (Benedetta Pilato) by a couple of hundredths and then suddenly they’re 20 points in front.

“To be honest I’m not a huge fan of that scoring system, but that’s what it is.”

You can watch Gibson’s interview via the International Swimming League YouTube channel below:

Coaches from the London Roar and Tokyo Frog Kings echoed a similar sentiment during pre-match interviews with Foster, and it’s been a hot-button issue among fans ever since the system was introduced in Season 2.

The jackpot scoring system awards the winner of an event with the points that would’ve been allotted to any swimmers in the field that aren’t within a margin less than the given “jackpot time” of the first-place finisher.

As it turned out, Match 8 was the first contest where the winner was decided by the jackpots since their introduction.

The London Roar would’ve won the match with 475.5 points without the jackpot system in place, while Energy Standard would’ve taken second with 464.0.

But with the jackpots, Gibson’s club prevailed with 507.0 points to London’s 486.5, keeping Energy Standard perfect (3-0) this season.

Energy Standard’s Ilya Shymanovich led the way in terms of jackpot scoring, gaining an additional 10 points in both the men’s 50 and 100 breaststroke.

just give every team a number of jokers f.e 3 or four per match, where jackpot margins are enabled. But everyone can get them. So a weaker team like to NY could pick one for wood in I’m. That would boost the strategic point

Interesting idea. I like it. Would increase the “live action” and “strategy” aspect.

This is a great idea but maybe only one for male and one for female and one random (male, female or relay)?
I think penalty points for slow swims rather than jackpots is fairer as they penalise the offending team without benefitting only the winner.
you could introduce bonus points for a League Record and more for a World Record

Maybe the joker should simply be a chance to get double points in one or two events rather than jackpot?

Isn’t the jackpot less about faster swimmers and more about not having swimmers underperform or take it easy or swim off strokes just to stop getting a penalty? There has been few races where 2nd and 3rd have been jackpotted – Maybe you should only be able to jackpot the points from the slowest swimmer from each team? Maybe award half the jackpot points like they did with the prize money? I definitely think you shouldn’t be able to jackpot your own team.

Skins points are overrated. And Skins jackpots are the worst.

Jackpots just ruin the match for the teams that aren’t as strong. Look at match 8 as an example Tokyo and LA had a close battle for 3rd the whole time but if they keep getting jackpotted those teams can’t make up the gap on each other in the minor points because their getting robbed by the top teams

Jackpots aren’t fair because they punish one team for another team’s weakness. For example, yesterday in the mixed medlay relay, Energy got 38 points by jackpotting both LA Current and both Tokyo relays. Neither of the two London relays were jackpotted and yet Energy gained a huge advantage over Roar, by getting 50 points in total compared to just 24 points.

13
0
Reply
Outside Smoker
Reply to  iceman

I have more issue with skins points then jackpot points. Nothing wrong with a swimmer racing hard to finish and dominating. Better than skewing 30+ points to a 50 stroke. At least jackpot rewards all distances and events.

I think they are good, I think they offer a good incentive for going extremely fast and a nice focus on finishes.