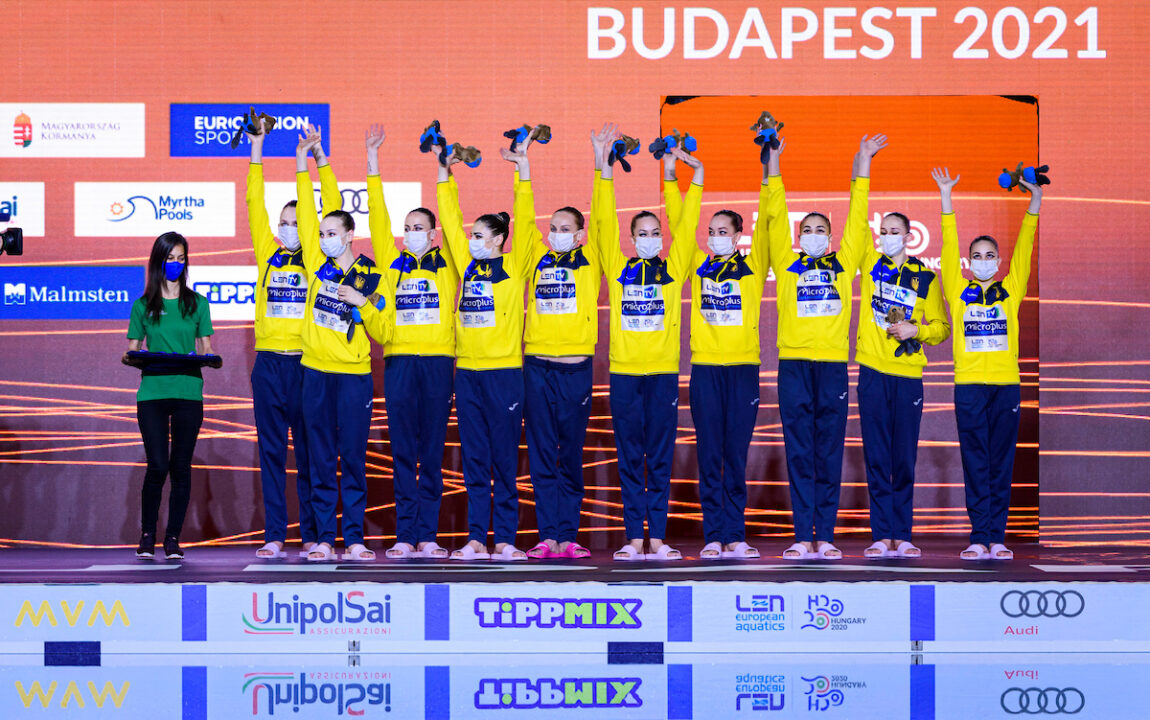 The last two artistic swimming competitions wrapped up on Saturday at the World Championships in Budapest, Hungary.

Giorgio Minisini and Lucrezia Ruggiero began the final day by winning their second gold medal of the week in the mixed duet free, which helped Italy finish with the most points and earn the overall winner honor.  It’s the first gold in this event for Minisini, who took bronze in 2015 and silver at the past two Worlds. The duo scored 90.9667 points to top the podium, a little more than a point ahead of Japanese siblings Tomoka Sato and Yotaro Sato (89.7333). The Chinese pair of Haoyu Shi and Yiyao Zhang claimed bronze with 88.4 points, marking the nation’s first medal in a mixed duet event. The podium finish continued China’s streak of medaling in every event they competed in at Worlds.

Ukraine also medaled in every event they competed, a streak that they capped with a gold in the last highlight routine final. The reigning European and world champions scored 95.0333 points to secure gold.

“It’s so special for us to represent our country, and we can show our performances and demonstrate our power,” said Maryna Aleksiiva. “It’s an incredible feeling to stand on the top of the podium after this final because it’s the biggest competition in the season and the past few months it was very hard for us. We had to leave our country and train abroad far away from home, so it’s so emotional and unique feeling winning a gold medal.”

The highlight routine gold gave Ukraine its seventh total medal — the most in the country’s history and tied for most this week with Japan — but China still outranked them both in the medals table thanks to four golds. Italy took silver in the highlight routine with a score of 92.2667, raking in the nation’s fifth medal of the meet. Spain rounded out the podium with a bronze, the country’s first medal of the week.

In Friday’s team free final, the Chinese squad scored 96.7 points to break through with a gold medal after taking silver at the past three Worlds. Ukraine and Japan snagged silver and bronze, respectively. USA’s Anita Alvarez was ultimately ruled out of Friday’s team final after there was initially a possibility of her returning following her fainting and sinking to the bottom of the pool during Wednesday’s free solo final. The Americans placed 9th out of 12 teams.