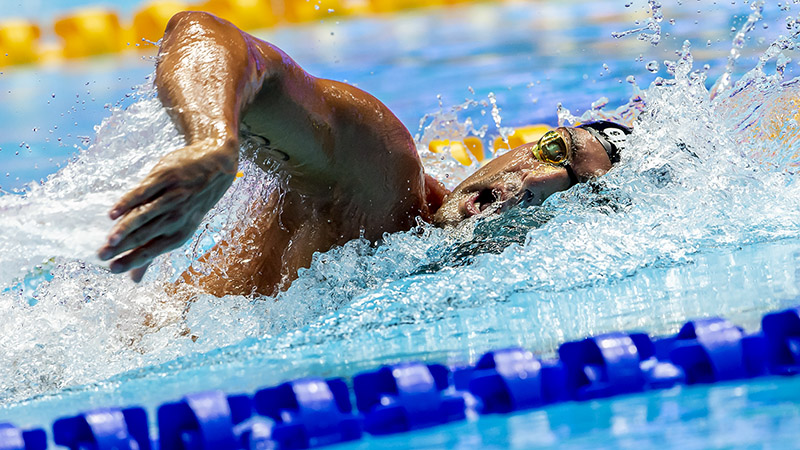 Gabriele Detti had a quick 1:45.30 split as the Italian men set a new National Record in the final of the men's 4x200 free relay. Current photo via Giorgio Scala / Deepbluemedia / Insidefoto

The Italian men broke their National Record in the final of the 800 free relay, producing a time of 7:02.01 to narrowly miss a medal.

The team of Filippo Megli, Gabriele Detti, Stefano Ballo and Stefano di Cola came together to erase the 10-year-old super-suited record of 7:03.48 set at the 2009 World Championships in Rome.

In the prelims, the squad comprised of Megli, Ballo, di Cola and Matteo Ciampi turned some heads by qualifying first for the final in 7:04.97, and then Detti was brought in for the final as they took a run at a spot on the podium.

In a wild five-team race on the anchor leg, di Cola put up an impressive 1:45.58 split, but got overtaken by American Townley Haas to leave them on the outside looking in, 0.03 off of the bronze medal.

This is the third Italian relay record to fall through six days of competition, as they also went down in the men’s 400 free (3:11.39) and the mixed 400 medley (3:43.27). We’ve also seen an additional eight individual records fall.

By definition everything started with Novella Calligaris and Giorgio Lamberti. They have been pioneers for Italy regarding swimming. With Olympic Games of 2000 we proved a deeper team spread in different styles (breastroke and medley among all). In 19 years, finally there is a solid movement with a good turnover among young and veterans and a good depth in more or less all events. Of course relays are strong and can fight for a medal. It’s not cooky to say that now we are a Tier 1 country regarding swimming

Stefano Battistelli? First Italian man to win an Olympic medal I believe and was on the strong 4×200 relays with Lamberti during that period.

Imma reread Gold in the Water and bet back here. I recall a breaststroker from 2000…