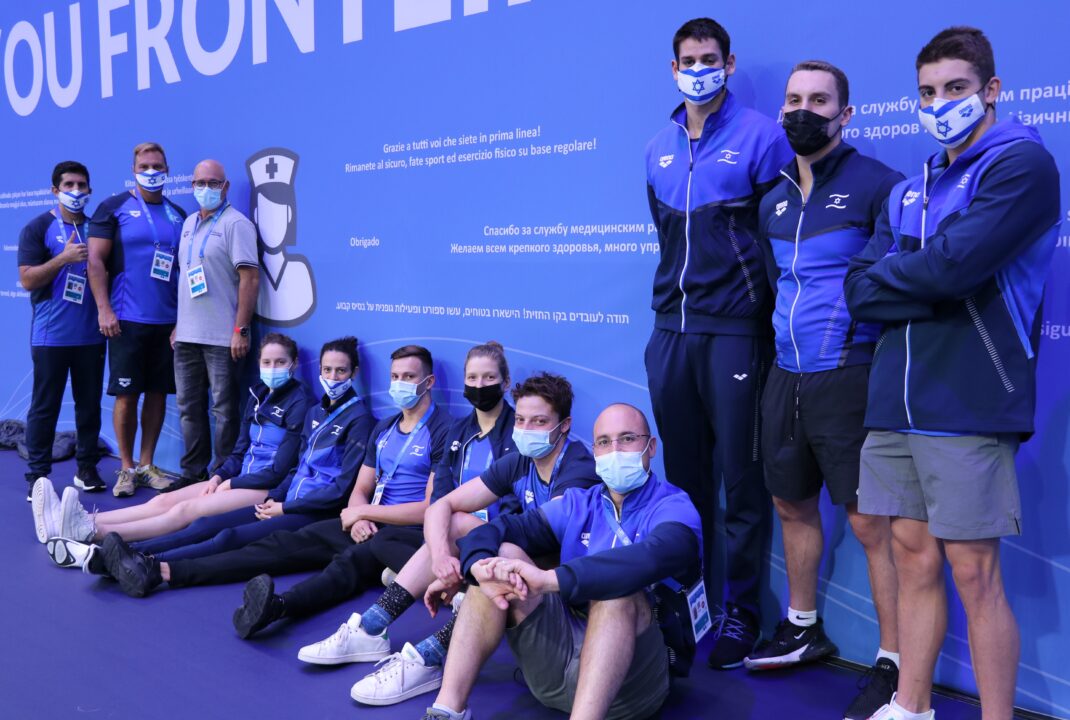 The Euro Junior team is headlined by Daria Golovati, the only member who is also competing at the World Championships two weeks earlier in Budapest.

On Tuesday, Israel announced its roster for the 2022 European Junior Swimming Championships from July 5-10 in Romania along with its lineup headed to the Mediterranean Cup Swimming Competition set for June 3-5 in Cyprus.

The Euro Junior team is headlined by rising star Daria Golovati, the only member of the squad who is also competing at the World Championships two weeks earlier in Budapest, Hungary. The 16-year-old sprint specialist swept the 50 freestyle (25.62), 50 butterfly (27.52), and 200 freestyle (1:59.67) last week at the Israel Swimming Association Cup, qualifying for all three events in July. Golovati became just the third Israeli ever under the two-minute mark in the 200 free after Andy Moraz and Olympic finalist Anastasia Gorbenko. At the Israeli Championships this past December, she came away with five gold medals and six age records.

Backstroke specialist Inbar Danziger joins Golovati as the only swimmers entering three events in Romania after he qualified for the 50 back, 100 back, and 200 back. At the Edinburgh International Swim Meet in March, Danziger finished in second place in the 50 back with a time of 26.24. At December’s Israel Championships, the 17-year-old broke the age group record in the 100 back with a 53.31.

The roster features several other Israeli junior record holders. Okan Goldin qualified for the 100 back and 200 back after setting age group records in both events during the past year. Last week, the 15-year-old crushed a 56.96 in the 100 back prelims to break Sergei Shurin’s mark that stood for seven years. During the final soon after, Goldin touched the wall in 56.88 to break his own record. At December’s Israeli Championships, he clocked a 2:01.83 in the 200 back to unseat Dennis Loktev as the fastest 14-year-old Israeli ever. Goldin also broke the 15-year-old age group record last week in the 50 back with a 26.83 – .49 seconds quicker than the previous mark – but he isn’t listed as swimming the event in Romania.

Israeli record holder Martin Kartabi qualified for the 50 free and 100 free. At December’s Israeli Championships, he claimed the 17-year-old age group record with a 21.99 in the 50 free, edging Ziv Klontrov’s previous record by .04 seconds. Breaststroke specialist Daniel Yossifov will also compete in two events after qualifying for the 100 and 200 breast. He broke the national 17-year-old record in the 100 breast with a 1:00.26 at December’s Israeli Championships. Last week, Yossifov won the 200 breast in 2:15.70. Daniel Darbatzov, who set the 15-year-old age group record in the 50 fly with a 24.69 in December, will swim the 100 fly in Romania.

Hadar Karp will take on the 50 free along with Golovati. Last week, Karp swam a 26.06 in the 50 free, the second-fastest time by an Israeli woman in the event this year behind Golovati. Karp also placed third in the 100 free with a 57.57, a nearly two-second improvement from last summer.

Daniel Krichevsky qualified for the 100 fly. At the Edinburgh International Swim Meet in March, he posted a 56.01 in the event to place third. In the 200 fly, Israel will be represented by Ofir Rakhah. At 16 years old, Rakhah competed at the European Short Course Championships last November. He placed 17th in the 200 fly with a 2:18.80 and finished 24th in the 100 fly with a 1:03.42.

Israel is also sending a pair to compete in the 200 back. Tom Minis topped the podium last week in 2:12.65, just .09 seconds ahead of runner-up Noga Zilberberg and a few seconds ahead of fellow Euro Junior team member Maayan Levkovich, who placed third.

Goldin is also competing in the 100 back and 200 back on Israel’s Mediterranean Cup team this year – the only swimmer listed on both rosters. The quartet of Itai Rosenfeld, Yoav Rotem, Daniel Rabinovich, and Daniel Darbatzov will have a busy week in Cyprus after qualifying for three individual events apiece. Rosenfeld qualified for the squad with a 4:40.31 in the 400 medley, one second ahead of Rotem’s 4:41.36. At December’s Israeli Championships, Rabinovich placed ninth in the 800 free with an 8:19.99. Born in 2006, he was the youngest finisher in the top 10. Rabinovich also placed ninth at the same meet in the 1500 free with a 15:52.60. Darbatzov set the 15-year-old age group record at December’s Israeli Championships with a 24.69 in the 50 fly.

Itai Handler qualified for the 200 free and 400 free following silver-medal performances in both events at the Youth National Swimming Championships last year as a ninth grader.

There’s a mixup between SCM and LCM in the swimmers’ PB’s, might consider noting which course is what.
Just to make it easier for you- Winter Nationals were SCM so all the results from December are SCM. The LCM season starts immediately afterwards, so anything from January and onwards is LCM.

I know that 24.79. The original article stated 24.97. So I posted that comment and requested the link.