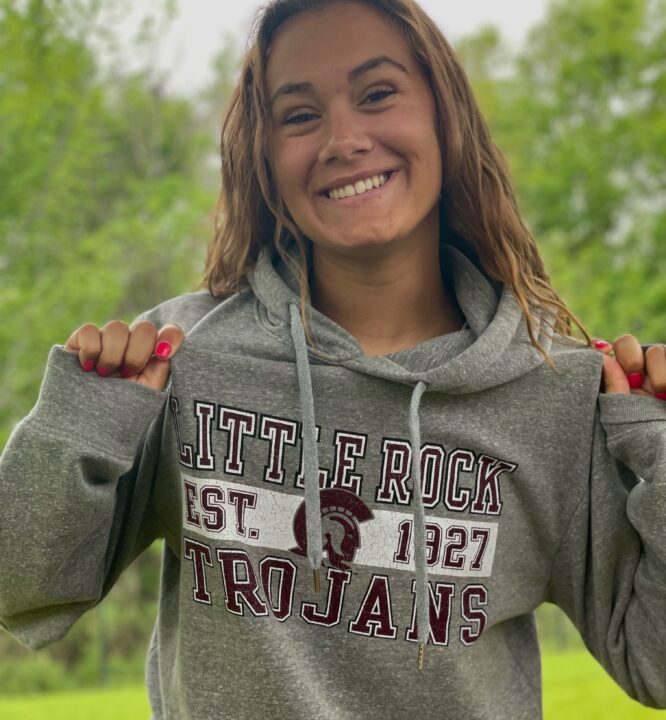 Thompson spent the last year at the University of Texas at Tyler which does not have a varsity swim team, but she continued to compete in club swimming meets. Current photo via Talia Thompson

Talia Thompson from Tyler, Texas has announced that she will be transferring to Arkansas-Little Rock beginning in the 2022-2023 school year.

“I chose UALR because I love the team environment that they promote, the academics, the coaches, and the girls, who were so incredibly welcoming. I am so happy to be joining the UALR swim family! Go Trojans!”

Thompson will be transferring to Little Rock after spending a year at the University of Texas at Tyler, which does not have a varsity swimming team. Thompson graduated in 2021 from Grace Community School in Tyler, TX.

Thompson will travel about four hours from home to join UALR. The UALR women finished seventh out of eight teams at the 2022 Missouri Valley Championships. The team was only 47 points behind sixth place Evansville. The team was led by junior sprinter Annya Grom who scored a total of 48 points. Grom finished second in the 50 and 100 freestyles as well as fifth in the 100 butterfly.

Thompson will arrive on campus this fall and join the class of 2025 which already includes eight girls.