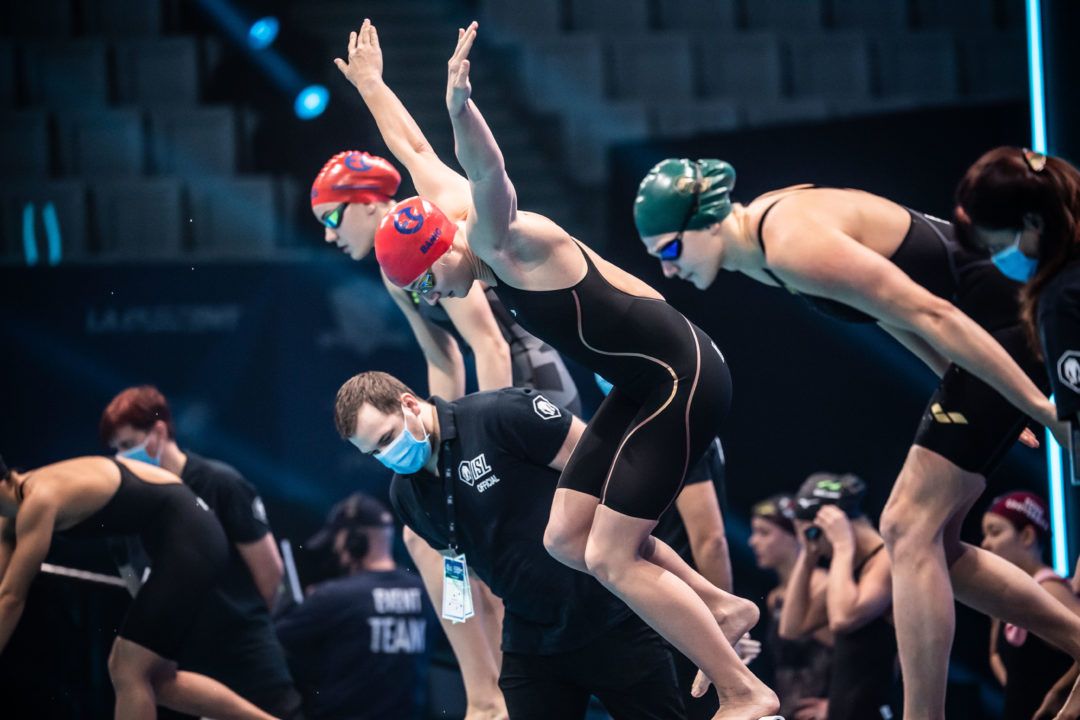 The 2020 ISL season has been a debutant party for Maddy Banic's pro career, including going toe-to-toe with the reigning league MVP Sarah Sjostrom in skins. Archive photo via Mike Lewis/ISL

Semifinal #1 of the International Swimming League took the season’s already-fast results and accelerated them to a whole new plane of impressiveness.

In addition to a number of season bests and records set in major swimming nations, the first meet of the playoffs also saw the first 2 World Records of the 2020 ISL season go down in the men’s 100 breaststroke (Adam Peaty) and women’s 50 backstroke (Kira Toussaint).

Digging beyond those records, there were some really important developments on Sunday morning, especially for American swimmers – the bulk of whose home-nation fans would have missed the meet with the early-morning scheduling.

Below are 4 big things that happened on Sunday that you might have missed.

Maddy Banic might be the breakout star of the 2020 ISL season: a season that saw a lot of them.

She was a late addition to an Energy Standard team that already had 2 of the world’s best short course butterfliers: World Record holder Sarah Sjostrom, and World Junior Record holder Anastasiya Shkurdai.

But with Sjostrom dealing with a back injury earlier in the season, Banic got her shot at individual racing, and hasn’t given that spot up yet.

Banic finished 2nd in the women’s 50 fly skins on Sunday, picking up a big payday and big points. That included a 10-point win in the first round for 24 total points and $8,400, bringing her match earnings up to $14,400.

That brings her season total up to $30,800, and with Energy Standard moving on to the final, that total will likely grow.

For a swimmer who entered the season as a fringe-pro and who was only picked up late in the signing period after showing up on SwimSwam when she had a breakthrough swim during a practice session at home at the University of Tennessee, that’s a pretty good 5 weeks worth of results.

We could tell that there was new interest in her when, for a moment, her bio on the site popped up on our ‘most read articles.’ For about 15 minutes, more people were reading about Maddy Banic than about Adam Peaty’s World Record.

All cynicism aside about soft schedules and rules changes: this is a big part of what makes Energy Standard so good. They identified two swimmers, Maddy Banic and Benedetta Pilato, who have become huge contributors and among the league’s best, after the initial signing period. That means swimmers who were either passed up, or couldn’t be convinced to compete, by the 9 other teams in their first pass.

As other teams were scrambling to fill roster spots with warm bodies when big chunks of swimmers from Australia and Italy withdrew, Energy Standard was finding ways to get stronger.

That’s effort, intuition, and hustle by the Energy Standard staff.

Michael Andrew Gets His First, and Last, Win of 2020 ISL Season

The New York Breakers beat expectations this season to qualify for the semifinals, and they did so without a top-notch performance from a man who should have been their biggest performer in this format: Michael Andrew.

And while the Breakers didn’t get quite the full-scale ‘pop’ in results that we saw from teams like London and Energy Standard, they did have one big bright spot on the final day of their season: Andrew won his first, and last, race of the 2020 season with a 51.66 in the 100 IM.

In the process, he beat Tokyo’s Vlad Morozov, the World Record holder, by .12 seconds – though Morozov wasn’t really at his peak this season either.

That time wasn’t a season-best for Andrew – he’s been 51.64 – but a win, and one over the World Record holder, gives him a jumping off point as he returns home to San Diego in need of some renewed focus before the 2021 US Olympic Trials.

Earlier this month, on the SwimSwam Podcast, he told Coleman Hodges that he was “honestly tired of being the guy that can only swim 50s,” and that the ISL season helped him recognize that he had been too distracted from his training, and that he needed to get back to work.

The Breakers now head into the offseason a rung-above on the ISL ladder where they ended season 1. In year #1, they were last in every meet they swam. Now, the Breakers are (probably) the worst of the 8 playoff teams, but at least they were in the playoffs.

They found some good pieces this season, including Arina Surkova, who won the 50 fly on Sunday in a new Russian Record. But they still are looking for their superstar, their Tom Shields or Beryl Gastaldello or Ranomi Kromowidjojo or Caeleb Dressel. That’s a swimmer who can be relied on to be in the top 2 of almost every race they swim, pick up Jackpots consistently, win a lot of races, and hammer them home on relays.

We don’t yet know what the ISL format will look like last season, but the gap between the haves and have-nots continue to be those stars. If you look at the math, the Breakers, who were essentially uncompetitive in semifinal #1, are just a couple of stars away from making the next move, into the tier of teams NIron and Tokyo.

But she fell short, swimming 55.90 to miss Minna Atherton’s World Record of 54.89 by more than a second.

Toussaint’s best time of 55.17 came at last year’s European Short Course Championships after only a brief appearance in the ISL season. Her best time of this ISL season so far was a 55.68 – still faster than she swam on Sunday.

Toussaint has always been sprint-focused: in college, she more often swam the 50 free rather than the 200 backstroke.

D0es this mean she’s got more saved up as London Roar advance to the semi-final? I hope so.

No Injury Problems For Alia Atkinson

London Roar’s Alia Atkinson was just 3-tenths of a second away from her own co-held World Record in the 100 breaststroke, swimming 1:02.66 on Sunday to win. She beat the young Italian Benedetta Pilato (1:03.55) by almost a second.

Atkinson, who is now 31 years old, said on the London Roar Podcast earlier this week that she was dealing with a little bit of an injury. As we’ve seen from these minor injuries throughout the season, though, she’s managed to pull past it and still perform at her best.

That’s a cool thing to see as the ISL works on establishing relevance with a mainstream audience. Athletes fighting through injuries and illness to winning performance is a common sports trope, and one that the masses react to.

Great racing from Banic but I wonder a few things.
They did not show everything but it appeared as if Banic did not warm down between the skins races, is that correct?
A lot of breathing from Banic that last race, maybe warming down could been helpful?

What’s up with Tennessee girls? They are crushing the ISL right now. Banic and Toussaint are obvious but Chieplua won the 400 IM and small and brown are doing well. I’m happy for them.

What’s up? Great coaching from Matt Kredich, that’s what’s up!

So happy for the Maddy love!! Kira too. Nice swimming lady vols!!