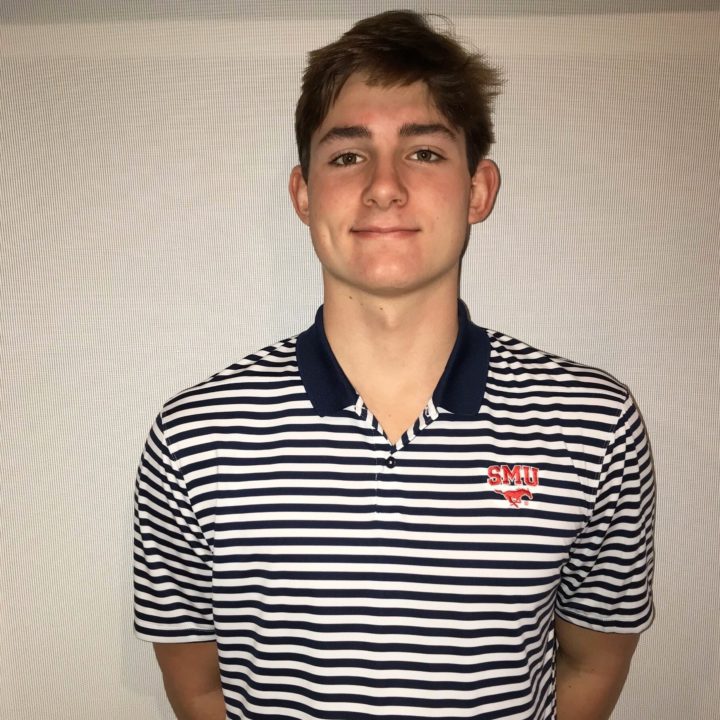 John Culver from West Des Moines, Iowa has committed to the SMU Mustangs in the class of 2020. He is a three-time top-4 finisher at the Iowa High School State Championship meet who specializes in backstroke and IM events.

I’m happy to announce my verbal commitment to study and swim at Southern Methodist University!! pic.twitter.com/EW7IK040qb

Culver was also a member of Dowling Catholic’s 200 medley relay that broke the Iowa State Record in 1:32.67. He teamed up with Nick Chase, Jerry Xu, Gage Agnew, and split 21.05 on the anchor leg to chase down the old record and earn Automatic All-America status in the relay.

The 200 IM is a race where SMU is particularly in need of help: Carson Garrett, who tied as the program’s fastest 200 IMer last season as a senior, ranked just 14th in the AAC in the event. The Mustangs are in a little better shape this year in the backstrokes, thanks in part to senior Matan Segal, but after he graduates, they become very thin in that race as well. Among backstrokers who will still be on the team when Culver arrives, he would rank 2nd in the 100 back behind only Stephen Cheng among best times last season. Cheng swam a 50.10 at the team’s mid-season invite.

Culver joins a growing first recruiting class for new SMU head coach Greg Rhodenbaugh, who brought big-time coaching credentials to the program this summer when he replaced the now-retired Eddie Sinnott as head coach. Rhodenbaugh spent most of the 2018-2019 collegiate season on administrative lead during an ongoing Title IX investigation, which eventually resulted in him being ‘reassigned’ to another role within the athletics department.

Other top names in the class include Oklahoma state champion Jack Callan, Cole Parnell, Evan McCormick, and Tyler Mansheim. The story of this class for the SMU men is rebuilding depth after a few down years of recruiting led to them sliding to 4th out of 4 teams at last year’s AAC Championships.