Greg Rhodenbaugh to Return to SMU as Head Men’s Coach 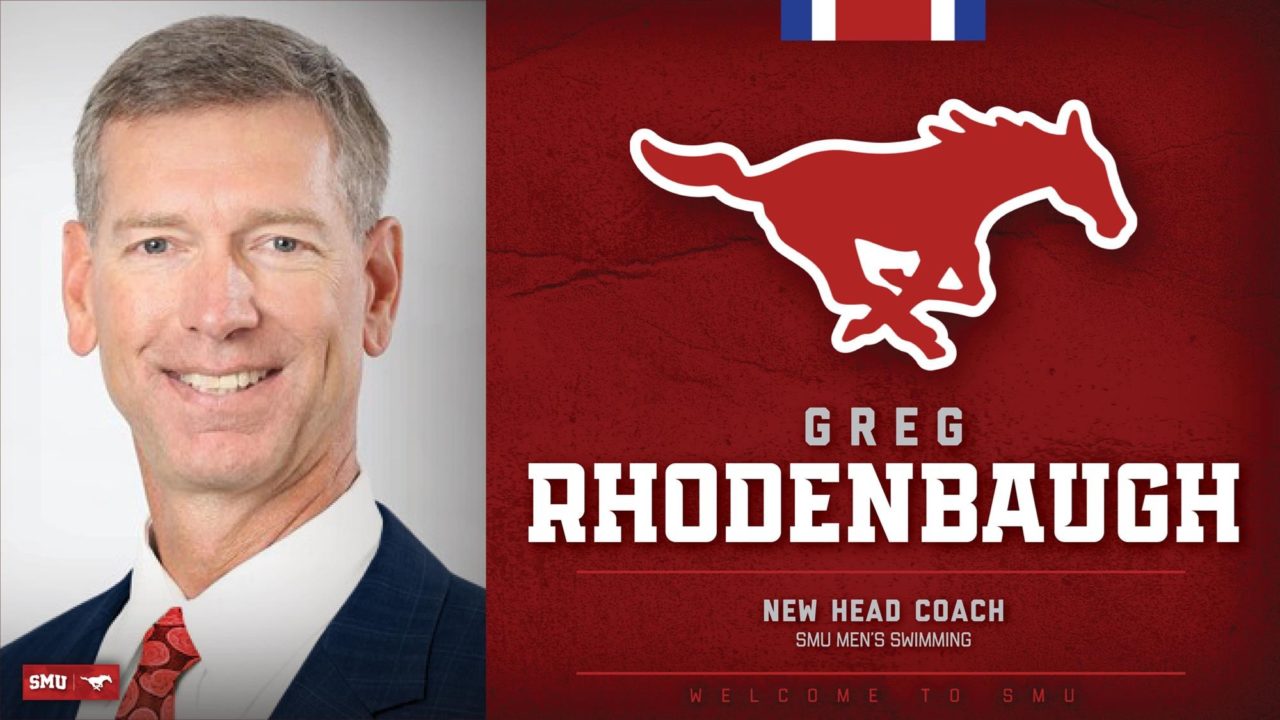 Rhodenbaugh will return to SMU, where he was head coach during the 1988-1989 season, after nine years at the University of Missouri. Current photo via SMU Athletics

Former Missouri head coach Greg Rhodenbaugh will be the new head men’s coach at SMU, the school announced Thursday. The program’s previous head coach, Eddie Sinnott, stepped down after 30 years in late May.

Rhodenbaugh was head coach of the Mustangs once before, during the 1988-89 season, after serving as an assistant and swimming for the team from 1980-84.

“We are excited to bring an alum home to the Hilltop to lead our men’s swimming program,” Athletics Director Rick Hart said. “As a former student-athlete and coach here, Greg understands the rich history and tradition of SMU Swimming, and is committed to helping us return our program to an elite national level. We welcome Greg, his wife Lisa, an SMU alumna, and their family back to Dallas.

Rhodenbaugh was “reassigned” from his former position at Missouri last season amid a Title IX investigation, which was closed last month. His camp recently sent out a release saying he had been cleared of all wrongdoing, but the school disputed that finding, saying that it terminated his contract and did not issue a conclusion.

Rhodenbaugh spent nine years in Columbia as head coach, during which time the Tigers saw 23 women earn 124 All-America honors, while 23 men picked up 103. As a team, the men posted the top six NCAA finishes in school history, while the women made it seven.

Prior to Missouri, Rhodenbaugh was an assistant under Frank Busch at the University of Arizona, where both the men and women were 2008 NCAA champions.

“I am so excited to be back on the Hilltop, and I am honored to be coaching the Mustangs again,” Rhodenbaugh said. “I believe that SMU is one of the premier Universities in the world, and it provides such an incredible opportunity for its student-athletes to excel. With SMU’s new Robson and Lindley Aquatics Center and its rich athletic tradition, the Ponies are poised to regain their place as a swimming powerhouse.”

As an alumnus and former coach, I look forward to helping the program grow and the student-athletes flourish. One of the main reasons I got into coaching was to help position young people for success and prepare them for life after college. SMU did that for me and now I can pay that forward. I would like to thank SMU and Rick Hart for allowing me to fulfill my dream of returning to my alma mater and training the Mustangs.”

During his time at SMU as a student-athlete, Rhodenbaugh earned All-America honors in the 100 breast twice, 200 breast once, and as part of the 800-yard freestyle relay twice. In addition to his NCAA career, Rhodenbaugh won the 200-meter breast at the 1982 U.S. National Sports Festival and was a member of the U.S. team at the 1983 World University Games in Canada.

Thrilled for Greg and Lisa! A great move by SMU and a real win for college swimming. It’s great to see such an amazing coach moving forward.

SMU IS BACK FOLKS

That is certainly my hope. I swam with Greg at SMU and am looking forward to a new era in the new pool.

This is a good fit. If he pulls the religious stuff again, hey, its a Christian university! Good luck Greg.

According to Wikipedia “the university is non-sectarian in its teachings.”

Welcome home to Greg and Lisa and the entire Rhdenbaugh clan! Great to have them back on the hilltop. Mustang Mania lives!