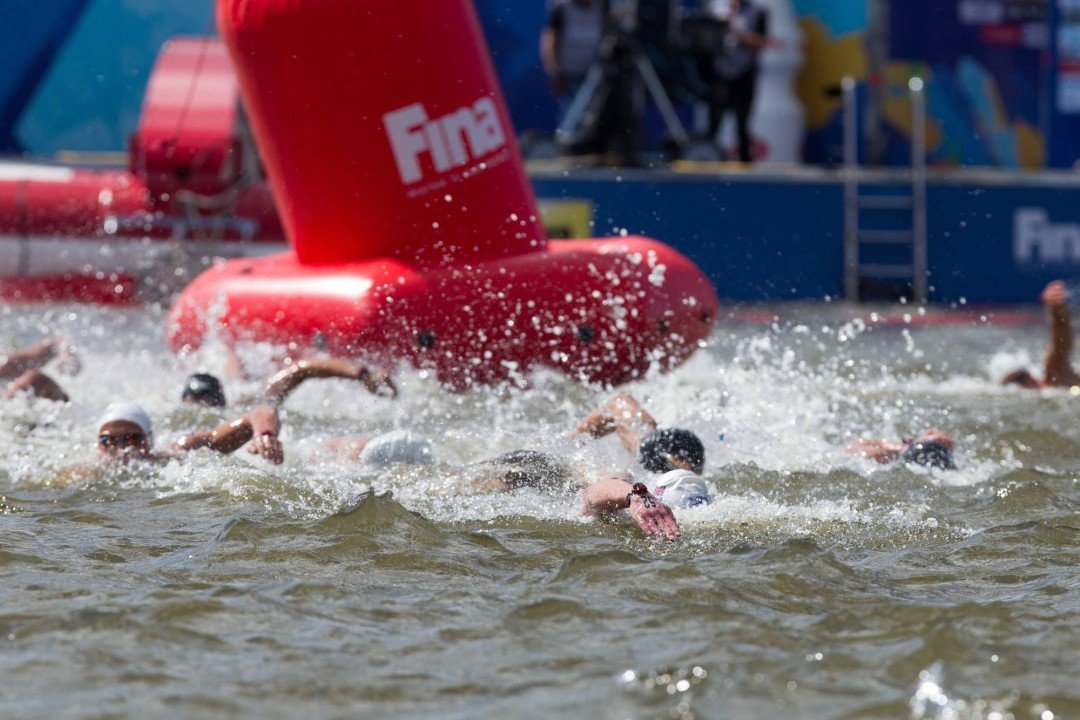 The International Olympic Committee announced they do not believe testing the viral levels in the Olympic waterways in necessary. Current photo via Tim Binning/TheSwimPictures.com

Catch up on the biggest Olympic and Paralympic storylines outside of the swimming world, including scandal in the Olympic boxing world.

Basketball player Sue Bird and baseball player Eddy Alvarez will carry the flag for the United States at the Tokyo 2020 opening ceremonies.

As Rio de Janeiro’s dirty water saga continues to press on, the International Olympic Committee announced they do not believe testing the viral levels in the Olympic waterways in necessary despite almost certain exposure to pathogens, according to leading health and water experts.

Open water swimming is scheduled to take place at Copacabana Beach, which is one of the locations that the  the Associated Press’ discovered high viral and some bacterial contamination. The IOC is choosing not to conduct any of their own viral tests because “the World Health Organization (WHO) has not and will not issue an ‘official recommendation’ on viral testing.”

The Associated Press contradicts that statement, however. The AP said they have received two emails from the World Health Organization after releasing the results of their study on July 30th. Reportedly, the WHO told the AP that they were advising the International Olympic Committee “to widen the scientific base of indicators to include viruses.” When asked about the statements made to the AP via email, the WHO changed their tone and claimed that the “WHO has not and will not issue an ‘official recommendation’ on viral testing.”

Additionally, the IOC admitted that they dismissed reports that a third of the US Rowing team got sick due to the exposure of contaminated water at the World Junior Rowing Championships; Rio 2016’s rowing test event.

“Nawal El Moutawakel, who heads the IOC’s inspection team that comes to Rio every six month to check on progress in the city’s Olympic preparations, also cast doubt on the U.S. team doctor and stressed [the IOC’s] commitment to the athletes’ health and safety.”

Despite promises made to clean up the cities’ waterways when they Rio was awarded the games in 2009, Gov. Luiz Fernando Pezao recently pushed the timeline for a cleanup of the Guanabara Bay back to 2035. Olympic Games Executive Director Christophe Dubi also added that it was difficult to parse out what, exactly, the Olympic water cleanup promises had entailed.

“Thanks to the games, the level of awareness regarding the bay has been raised to unprecedented levels, which is a good thing,” Dubi said.

Although bringing awareness of the bay’s pollution is a good thing, something needs to be done within the next year, rather than by 2035.

“Ignore it and it won’t be there” – the new Olympic motto.

When visiting Brazil, it is advisable to swim at the hotel pool. The ocean off Brazil has RAW sewage floating around, and the IOC is not concerned about swimmers’ health? Do the swimmers have to potentially be hospitalized, or worse, die, before the IOC does its job correctly?

Shame on the IOC.!!! Just concerned about appearance and money. Not health, and safety of athletes. If Brazil doesn’t clean up.their act the games should go back to London as was threatened last year because of their lack of progress on venue construction.

this is incredibly irresponsible.

How about all the open water swimmers, rowers and sailors from all sane nations organizing a “safe water” Olympics 2016 at a better venue? It wouldn’t be a boycott if they could all organize (with medals and everything). They’ve got just under a year. Hawaii again anybody?

Well, if I were an open-water swimmer headed to the Olympics I’d refuse to swim in this water. I might even consider that if I were a boat-sport athlete. Lacking any more action from the IOC, I think they all have to strike or the equivalent and get the venue changed. Bummer.

Worse, long-term, what does this say for what we’re doing to our oceans? (and not just to point fingers at Brazil – at our rivers, like the Animas in Colorado?).

I wonder if Mr. Nawal El Moutawakel and Gov. Luiz Fernando Pezao would be willing to assuage our fears by spending an hour or so swimming in these “safe” waters. (Nah, who am I kidding?)

Shame on the IOC.