Vote for the ASCA Age Group Swim Coach of the Year 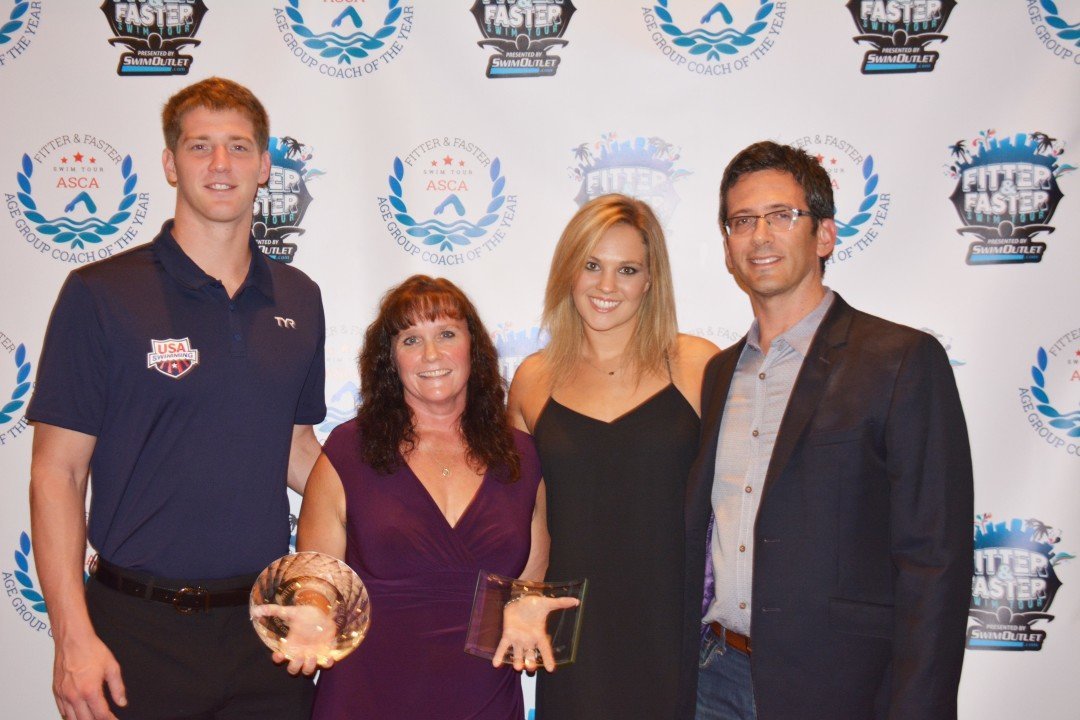 The final 24 contenders for the Fitter and Faster Swim Tour, American Swimming Coaches Association (ASCA) Age Group Coach of the Year Award are out, and we need your help to choose the winner!

This award is designed to recognize the top age group coaches in the United States. Using the USA Swimming Virtual Club Championship team rank for 11-14 year olds, the highest-performing coaches were identified. These coaches are the best of the best!

This prestigious award was first presented in 2014 to Beth Winkowski of Dynamo Swim Club at last year’s ASCA Banquet. Beth embodies the spirit of the award with her passion for working with young athletes. She explained:

“By the time swimmers get to college, they’re pretty much fully formed. I like to get my fingers in the clay and help form who they’re going to be.”

The top ten finalists will all be recognized this year at the American Swimming Coaches Association Awards Banquet in Cleveland, Ohio. That night, the winner will be presented with the award by Olympic legend Matt Biondi, three-time Olympian Kara Lynn Joyce and Fitter and Faster Founder Swim Tour presented by SwimOutlet.com and CEO David Arluck.

Arluck expressed that this award is significant because it “recognizes the grassroots level of American swimming, an essential piece of the puzzle for why America has been the world’s dominant swimming superpower for over a century.”

About Fitter and Faster

Founded in 2009, Fitter & Faster Swim Tour Presented by SwimOutlet.com (“FFT”) is the only turn-key elite level swim clinic operation in the United States. FFT enables teams and communities to host a professionally managed swim clinic featuring many of the best swimmers in the world. Our mission is to teach and inspire swimmers of all ages and skill levels.

Swimming News is courtesy of the Fitter and Faster Swim Tour presented by SwimOutlet.com, a SwimSwam partner.

Read the rules: it is statistically based on only 11-14 year olds from the VCC for SC 2015. The nominated coach was likely the group coach during the nomination period.
Bigger teams don’t really have an advantage, as the VCC only counts the top 2 swims – even if your team has 1000 swimmers, your elite swimmers are a minority percentage. In my opinion, the big teams are bigger because the coaches are great and they attract more swimmers.

There are deserving coaches on this list for sure but the VCC is a sham. This list alone is reinforcing “bigger is better”. How many teams on this list are under 400 registered athletes? 300? 2-3? Some of the teams are 1000+ (Many well coached)

The coach of Nashville Aquatic Club would have also deserved a mention.
They’ve done an amazing job with their young girls there all long course season with Alex Walsh as most successful story.
Also impressed by Cincinnati Marlins with the Foster brothers and I don’t see the coach mentioned either. Weird.

I agree with you Bobo. This list makes me wonder if ASCA bothered to spend much time actually looking at stats or if they waited until after Junior Nationals to compile it.

On a different tangent, why would a head coach list himself instead of his age group coach that put the team’s 11-14s on the Top Ten list?