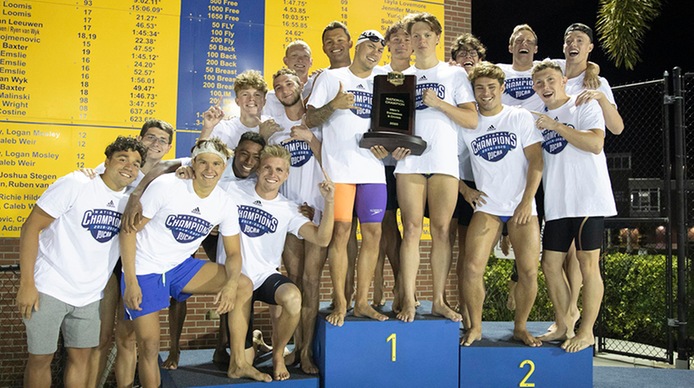 Among those from Indian River who collected wins on day 1 were Aramis Rivera and Taryn Dailey in the men's and women's 200 IM, respectively. Archive photo via NJCAA

Indian River State College pulled into an early lead on both the men’s and women’s side of the 2021 NJCAA Swimming & Diving Championships. Both of Indian River’s teams hold impressive streaks in the conference as the men have won the past 46 championship titles and the women 38. Indian River went into the meet as the favourites to win on both sides, holding the majority of the top seeds. The field has also cleared up a bit as some teams within the NJCAA have decided not to compete.

After only 1 session, the men of Indian River are more than 100 points ahead of second-place Iowa Central, while the women are 99 points up over Southwestern Oregon.

Indian River pulled off a number of wins during day 1 finals at the NJCAA Championships, beginning with Taryn Dailey in the women’s 200 IM. Dailey hit a 2:06.00 to take gold which was a solid PB for her, improving upon her 2:07.25 from the prelims. Heading into the meet she had a previous best of 2:08.69. Joining Dailey on the podium, teammate Rylee Woelk was a 2:07.58 for silver and Southwestern Oregon’s Jaqueline Feurtado was a 2:09.02 for third.

In the men’s 50 freestyle Indian River swimmer Dean Walker was nearly defeated by Iowa Central’s Johnathon Turner but ultimately won the event with a 20.66 to Turner’s 20.76. Joining the action, Alejandro Robles Ruiz from Southwestern was 0.02 away from silver with a 20.78, and Indian River’s Luke Altman was a 20.84 for fourth place.

Indian River’s Sydney Weatherspoon and Kailea Green both hit the podium in the women’s 50 freestyle but couldn’t quite catch Jameson’s Karianna Yuchnitz who clinched gold. Yuchnitz was the sole swimmer in the field to crack 24, posting a 23.87 for the top time while Weatherspoon was 24.61 for silver and Green was a 24.61 for bronze.

Weatherspoon also managed to medal in the 50 breast by swimming a 30.09 for silver, slightly trailing Iowa Central’s Magali Mouton who was a 29.99 for the gold medal. Barton’s Fanny Courbot rounded out the top 3 in the event with a 30.16.

Barton secured another medal during day 1 as Johan Cue Carrillo took gold in the men’s 50 breast as the sole man to swim faster than a 25. Carillo was a 24.53 for the win while Indian River’s Michael Deans notched a 25.20 and Iowa Central’s Drew Giles was a 25.74 for bronze.

To cap off the session, Indian River collected another 2 wins in the form of the men’s and women’s 800 freestyle relays.