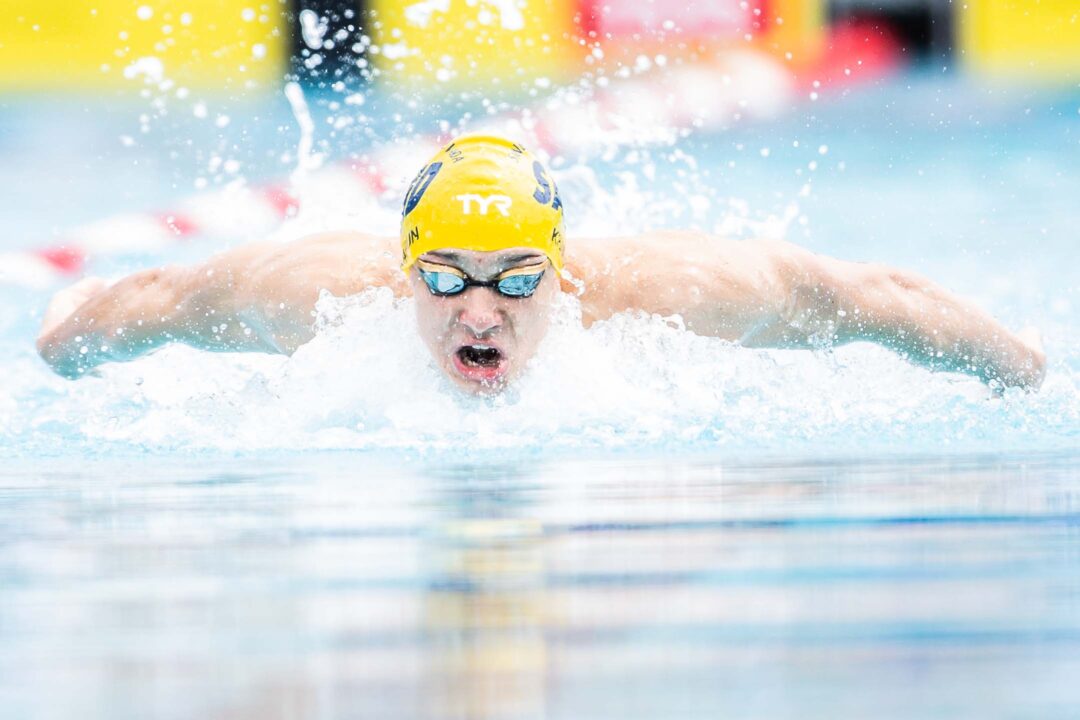 Ilya Kharun started things off at the Indianapolis World Cup with a new Canadian record in the 100 butterfly, hitting a 49.93. Archive photo via Jack Spitser/Spitser Photography

During the first night of racing at the Indianapolis World Cup stop, Ilya Kharun set a new Canadian record in the men’s 100 butterfly, hitting a 49.93. That swim brings the Canadian under 50 seconds for the first time, improving upon Josh Liendo‘s former mark of 50.00 from the 2021 World Championships.

This is Kharun’s first Canadian record as he is newly representing Canada internationally. A Canadian citizen, Kharun was originally named to the USA’s 2022 World Junior Championships team but was removed to due an issue with his citizenship. A few weeks later Kharun was named to Canada’s roster for the 2022 Short Course World Championships. He will make his Canadian national team debut at that meet in December in Melbourne.

This is Kharun’s first race during the 2022 World Cup series. He pulled off a second place finish here, touching just over a second after Chad le Clos who picked up his third gold medal in this event in as many competitions. Le Clos swam a 48.85 to top the podium and Marius Kusch of Germany was third in a 49.97.

Kharun shaved 0.07 seconds off Liendo’s record from last year by opening up with a 23.21 and closing with a 26.72. That first 50 split was a touch slower than Liendo’s 23.13 on the first 50, but Kharun came back faster than Liendo’s 26.87. Liendo swam that time during the heats at World Championships before finishing 14th overall in the semi-finals.

This is Kharun’s first Canadian record as he is newly representing Canada internationally. A Canadian citizen, Kharun was originally named to the USA’s 2022 World Junior Championships team but was removed to due an issue with his citizenship. A few weeks later Kharun was named to Canada’s roster for the 2022 Short Course World Championships. He will make his Canadian national team debut at that meet in December in Melbourne.

Seeing this headline made me look up how recently that whole kerfuffle happened. I find it very funny that it’s basically, “welp, guess I’m Canadian now” and just starts breaking their records.

I’m still trying to wrap my head around how a 17 year old (and his parents) didn’t know his nationality, and I say this as a parent of children with different nationalities.

Speaking as a Canadian with a US born swimmer son we didn’t bother to get his Canadian citizenship until it became apparent he was quick enough to make Canadian Trials. Our 2 Canadian born children got their US Citizenships when we moved to the US ( Mom’s American) to expedite the move So maybe it’s a case where the parents realized Kharun was fast enough and did the paperwork.

That’s understandable in your situation, but with Kharun he was removed from the junior pan pac team because USA Swimming became aware that he wasn’t an American citizen. His age group record from December ’21 was also invalidated.

Wasn’t American or became a Canadian citizen and decided to represent Canada so cannot represent US. You can be both American and Canadian as far as the government is concerned but you can’t represent 2 different countries simultaneously in swimming.

I understand that as I have children with dual nationalities. According to Swimswam USA Swimming says he’s not an American citizen.

Where does this compare to other 17 year olds of all time?

What’s this guys 100FR time? I imagine Canada’s men’s relay has a little more get up and go now with his addition.

That seems really premature to state with such certainty right now.

He’ll certainly be a boost to the medley relay, freeing up Liendo to do FR. Just need to get that elite breaststroker…

I appreciate the vote of confidence but we definitely have room for this guy if he’s 48.anything in the long course 100FR which he could easily be.

You should really do some research into his best times

Appreciate the friendly call out – I’m Canadian, not to familiar with the USA time system. I actually asked about it in my original post and considering his age and his performance looks like he can add to our 4X1FR relay and maybe med based on future potential. Someone mentioned his pre ious best already so that answers that!