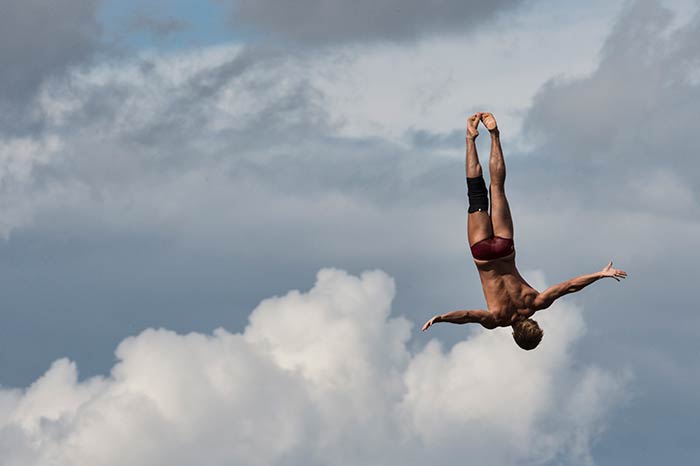 Against the stunning backdrop of the Abu Dhabi and the Persian Gulf, the world’s best (and bravest) high divers took... Archive photo via Simone Castrovillari

Against the stunning backdrop of the Abu Dhabi and the Persian Gulf, the world’s best (and bravest) high divers took flight last weekend at the 3rd FINA High Diving World Cup.

Since being introduced by FINA at the 2013 Barcelona World Championships, the sport of high diving, which sees athletes leap from heights more than double that of pool divers (20 meters for women, 27 meters for men) has produced stunning aerial photographs and ever-growing spectator interest.

The women’s competition was won by Canadian Lysanne Richard, with Australia’s Helena Merten and 41-year old American Ginger Huber coming in 3rd place. Showing the fickle nature of the elements of the sport, all three medalists from the 2015 World Championships competed at this event, but none placed higher than 5th. That includes the defending World Champion Rachelle Simpson, who was 8th out of 10 competitors.

In the men’s competition, the results went a little more as expected. Britain’s Gary Hunt, a 5-time Red Bull Cliff Diving World Series Champion and the 27m defending FINA World Champion, roared away with the victory in a score of 639.30 points across 5 dives.

Mexico’s Jonathan Paredes took 2nd place with a score of 578.50. He competed under the FINA flag, another reminder of his federation’s suspension by the world governing body, and without his nationality hinted at by the event’s organizers.

Below, watch the official replays of the two days worth of competitions.