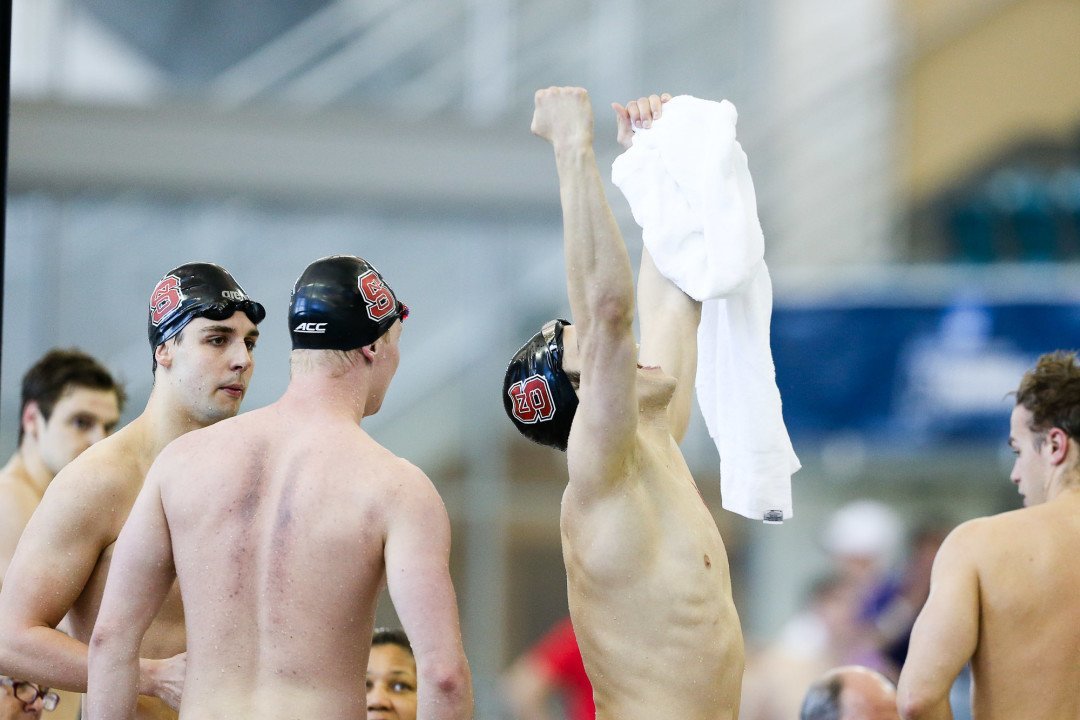 Joseph Schooling gave Texas the lead after the fly leg of the 200 medley relay, but Ryan Held roared home in 18.8 to give NC State the victory. Archive photo via Tim Binning/TheSwimPictures.com

Friday night in Austin, Texas saw some of the best swimmers in the country come together for a dual meet, as the Texas Longhorns hosted the NC State Wolfpack.

The men’s meet was packed with fast swimming from the first event: the 200 medley relay. NC State jumped out to the early lead, but Texas roared back with Joseph Schooling‘s 20.58 split on the fly leg. The Longhorns looked like they had control of the race, but the Wolfpack’s Ryan Held threw down a statement anchor split, powering his team to victory with an 18.85 freestyle leg.

Held also contributed individual wins as he dominated the men’s 50 free with a 19.49. That’s the 2nd time he’s dropped a 19.4 at a dual meet in the event so far this season. He then picked up another victory in the 100 free with a season-best 43.10.

All-American Hennessey Stuart swept his signature backstroke races to help the Wolfpack to victory. He first clocked a winning 47.77, just out-touching Texas’ John Shebat (47.85) to win the 100 back. He then sealed the sweep with his 1:44.23 in the 200 back ahead of the Longhorn’s Jonathan Roberts (1:44.86).

Olympic champ Joseph Schooling made his 2016-17 debut for the Longhorns here, as he missed the first few couple of dual meets this season. Schooling took on his usual butterfly duties, swimming a 1:45.82 to take the 200 fly. He then led a Texas 1-2 in the 100 fly with teammate Jack Conger, as the butterfly duo finished in 46.93 and 47.60 respectively. Conger also brought in an individual victory for the Longhorns, winning the 200 free with a speedy 1:35.82.

Jack Conger switched up his event schedule for this meet, swimming the 100 and 200 freestyles instead of the butterflies. Conger charged to a Longhorn victory in the 200 free, where he posted a speedy 1:35.82.

The end of the meet was just as exciting as the start, as NC State and Texas were neck-and-neck heading into the final leg of the men’s 200 free relay. Texas chose Schooling as their anchor, while NC State assigned the anchor job to Held. Schooling had an advantage by just a tenth at the start, but Held once again broke through the 19-second barrier to outsplit Schooling. His 18.90 anchor split gave the Wolfpack a 1:18.86 victory, while Schooling’s 19.11 split had Texas just a few hundredths back in 1:18.90.

On the women’s side, Texas sprint standout Rebecca Millard swept the sprint free races to help her team to victory. In the 50 free, Millard touched the wall in 22.55, tying NC State freshman Ky-Lee Perry for the win. She then won the 100 free in 48.78, finishing almost a full second ahead of anyone else.

Longhorn backstroker Tasija Karosas and breast/IMer Madisyn Cox each brought home a pair of individual wins. Karosas battled with NC State All-American Alexia Zevnik, first winning the 100 back in 53.21 to Zevnik’s 53.51. They returned to the pool for the 200 back, where Karosas touched in 1:55.45 for another victory over Zevnik (1:56.12). Cox, on the other hand, swept the breaststroke races with her 1:00.39 in the 100 breast and 2:10.40 in the 200 breast.

NC State’s Hannah Moore continued her impressive showing in the distance events, dominating the 1000 free with her 9:35.51. She also finished seconds ahead of the field in the 500 free, winning the race in 4:43.13. Moore closed the meet with a strong display of her versatility, picking up a 4:15.35 victory in the 400 IM.

Press releases will be added when they become available.

Awesome win for the Pack!!!!

Wolfpack in the house !!

Dressel, Held and Chadwick are the sprinting kings this year. Maybe Powers too

Powers gotta get his 100 together though, it’s doable, coaches just have to adjust his training