Blueseventy Swim of the Week: Double 18s For Held In Upset of Texas 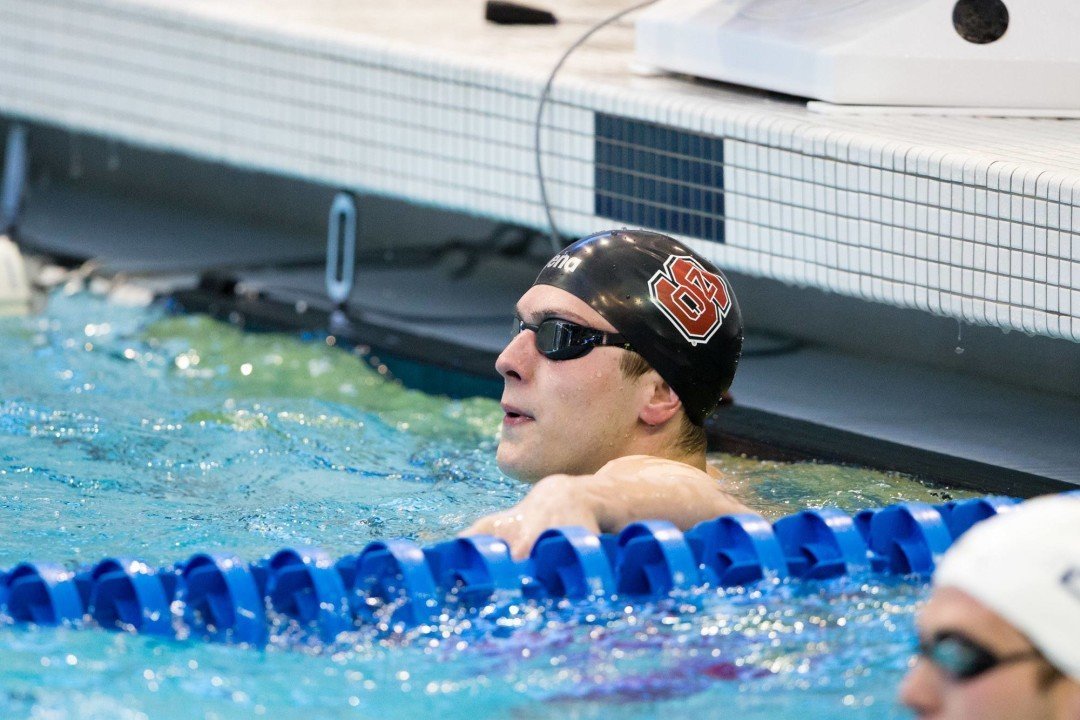 For the past two seasons, the Texas Longhorns have been the undisputed power in the NCAA. But on Friday night, a new gunslinger rolled into town and upset the power balance with two 18-second shots. His name: Ryan Held. Archive photo via Tim Binning/TheSwimPictures.com

For the past two seasons, the Texas Longhorns have been the undisputed power in the NCAA. But on Friday night, a new gunslinger rolled into town and upset the power balance with two 18-second shots. His name: Ryan Held.

Though Texas is a roster loaded in relay talent and returning Olympians, fellow Olympian Held proved he’s got the fastest draw in the West with a pair of sub-19 relay splits just a few months into the NCAA season.

Held entered the water staring down a three-tenth of a second deficit with 50 yards to go on the medley relay, but didn’t blink. Held blasted an 18.85 anchor to run down Texas and pick up the win for NC State, a massive swing of 14 points (+7 for NC State, -7 for Texas) in the very first event.

A big individual lineup (including wins of 19.49 in the 50 and 43.10 in the 100 by Held) helped NC State clinch the meet before the final relay even entered the water. But Held still took the opportunity to follow up his medley anchor job with another devastating shot. Trailing by two tenths of a second, Held smashed an 18.90 to run down Olympic champ Joseph Schooling and add another relay win to NC State’s prowess.

Of course, November dual meets aren’t exactly a set-in-stone proclamation that there’s a new NCAA sheriff in town. Texas’s lineup was missing a couple of stars (like Ryan Harty) and had some others in off-events (like Will Licon), and you won’t likely find the masses suddenly predicting an NC State win at NCAA’s next spring. But given how insanely dominant Texas has been the past two years and was expected to be this year, NC State’s huge effort has to qualify as one of the bigger upsets in recent NCAA history. It signals that (a) the Longhorns are human, (b) the Wolfpack is rapidly approaching NCAA title contender status and (c) Held hasn’t come anywhere near to taking his foot off the gas pedal following an Olympic run that netted him a gold medal on the 4×100 free relay.

With a proven clutch anchor like Held on the back of its already-loaded relays, NC State is fast becoming the scariest team in the NCAA.