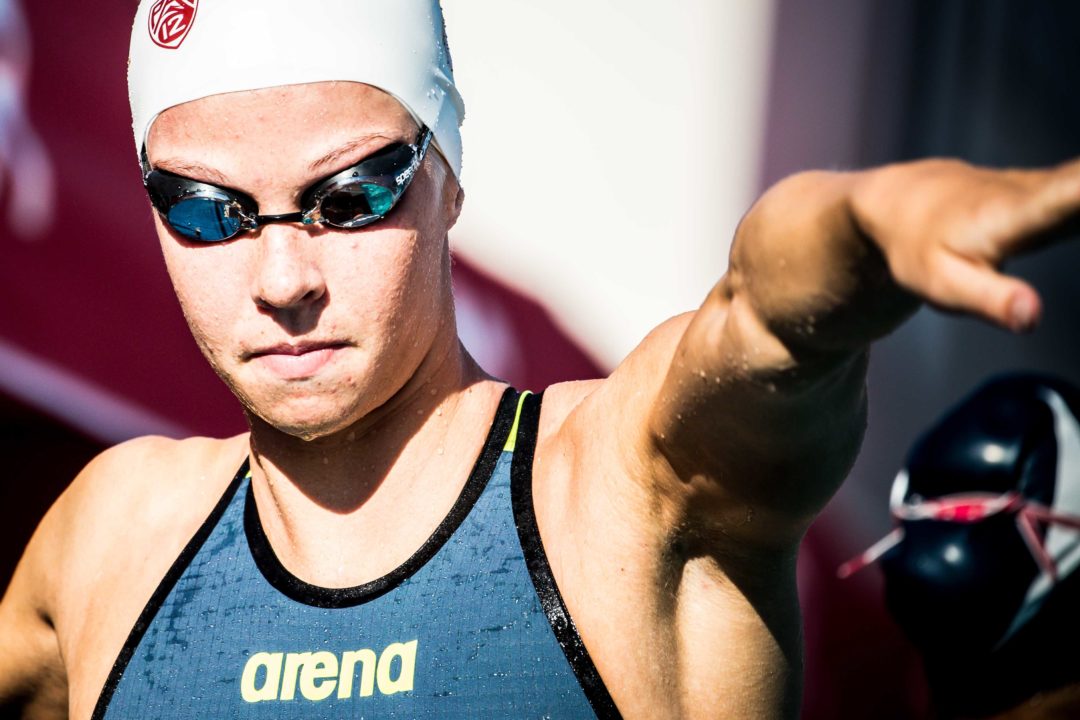 NCAA Champion Louise Hansson captured a pair of wins in her final dual meet. She dominated the 100 back in 52.86 and her signature 100 fly in 51.15. Archive photo via Jack Spitser/Spitser Photography

In their final meet before the Pac-12 Swimming and Divigng Championships, the USC women defeated city rival UCLA on Friday. NCAA Champion Louise Hansson captured a pair of wins in her final dual meet. She dominated the 100 back by a second in 52.86. Hansson also posted a 51.15 to dominate her signature 100 fly, an event in which she’s the NCAA Record holder. Relay-wise, Hansson put up a 47.82 leadoff on the 400 free relay and a 22.92 fly split on the 200 medley relay.

Sophomore Laticia Transom posted a pair of individual wins to guide the No. 8 USC women’s swimming and diving team in a 181-119 victory over crosstown rival UCLA at the Spieker Aquatics Center on Friday (Feb. 14). Senior Louise Hansson also contributed two individual wins against the Bruins.

USC handled the breastroke with ease. Isa Odgers led a Trojan sweep in the 200, finishing in 2:08.95. Maggie Aroesty touched second in 2:11.56 and Maile Lawson completed the sweep posting a 2:15.44 to take third. Odgers and Arroesty both posted season best times in the 200. In the 100 breast Aroesty took second, earning a B-cut with a season best 1:00.59. Odgers finished third in another season best 1:00.68.

USC’s dominant Crosstown Cup win will certainly provide valuable momentum as the team turns its attention to the Pac-12 Championships, which begin on February 26 in Federal Way, Wash.

LOS ANGELES – The UCLA swim and dive team suffered a 181-119 loss to USC on Friday afternoon at Spieker Aquatics Center in the final regular season dual meet of the year for the Bruins.

The Bruins (7-3, 4-3 Pac-12) picked up four event wins in the meet, all by different student-athletes. Before the competition, UCLA’s five seniors were recognized in a special Senior Ceremony.

Su, Rhee, and Neave were the big standouts for UCLA on Friday.

Su earned her second career win in the 1000 free and set a new personal best time in the event. She became the first Bruin this year to break the 10-minute mark in the 1000 this year. The Buena Park, Calif. native also placed second in the 500 free later in the meet.

Meanwhile, Neave placed top-two and broke the 300-point mark in both diving competitions. Her 306.83 in 1M represented a new career-best. Besides her dramatic win in the 100 breast, Rhee also placed second in the 100 free.

With a first place finish in the 200 fly, Okada (season-best 1:56.50) delivered a second consecutive win for the Bruins.  Lia Foster (1:59.78) broke the 2-minute mark for the first time to claim third place.

Grover was UCLA’s top performer in the 50 free with a time of 22.39, her second B Cut of the year in that event.

The Bruins and Trojans will match up again on Saturday morning in platform diving on Saturday morning at 10:00 a.m. In addition, a contingent of UCLA swimmers will be competing in the USA Swimming President’s Senior Classic in Coronado, Calif. from Saturday to Monday.

Anyone know why Maggie arosety wasn’t swimming earlier in the season?

Thanks. The times looked much faster than they had been going the last month