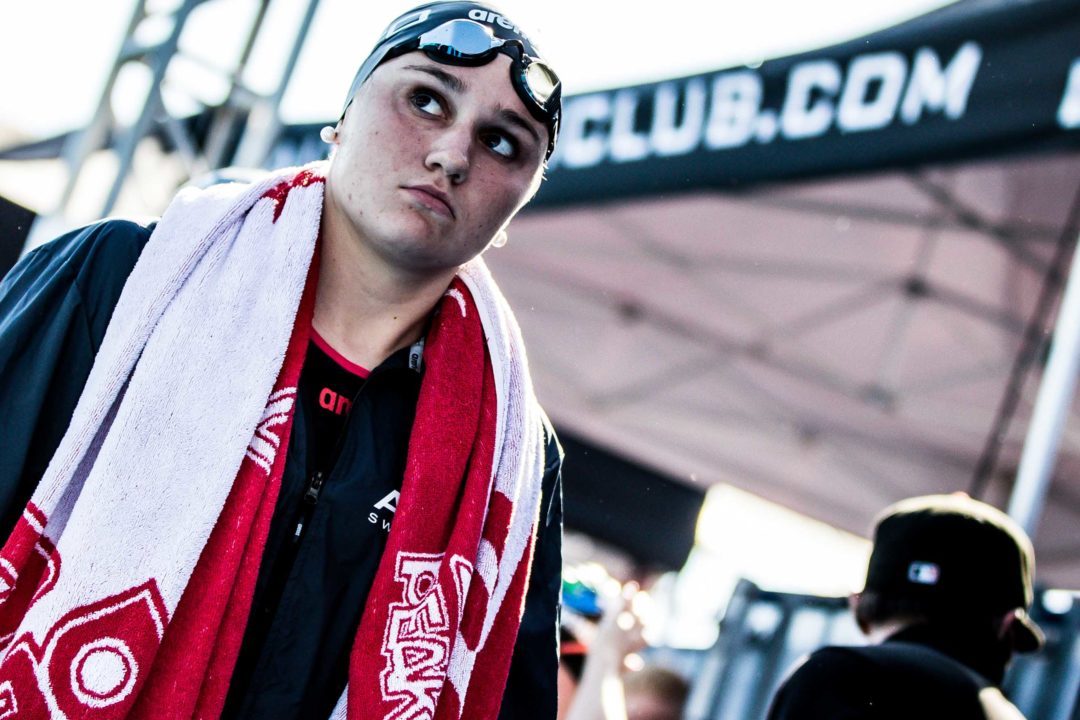 One of the seniors honored was Katie Drabot, who won a close battle in the 200 fly, 1:55.79 to 1:55.99, with fellow senior Allie Szekely. Archive photo via Jack Spitser/Spitser Photography

In a highly anticipated dual meet against 2019 runner-up Cal, the reigning NCAA Champion Stanford women were dominant. The Cardinal won by 89 points as they celebrated senior day, completing an undefeated season and handing the Bears their only season loss. One of the seniors honored was Katie Drabot, who won a close battle in the 200 fly, 1:55.79 to 1:55.99, with fellow senior Allie Szekely. Later winning a race of her own, Szekely ut up a 1:56.80 in the 200 IM.

Sprint star Abbey Weitzeil has been a consistent bright spot for the Golden Bears. This was her final dual meet, and she came up with yet another sprint sweep. Weitzeil took the 50 free in 21.89 and the 100 free in 47.97, setting a new Pool Record in the 50. She also anchored the free relays with 50 splits of 21.05 and 21.33.

The Cardinal won the first six events of the day. To start the meet, Stanford’s team of Alex Crisera, Allie Raab, Amalie Fackenthal and Lauren Green won the 200-yard medley relay with a time of 1:38.69.

In the last race of the day, Stanford’s 200-yard freestyle relay team of Fackenthal, Green, Emma Wheal, and Goeders finished second with a time of 1:29.83, just 0.37 seconds out of first place.

Stanford returns to action when it travels to Seattle for the Pac-12 Championships, February 26-29.

STANFORD – Abbey Weitzeil set a pool record in the 50-yard freestyle and earned wins in three of her races in Cal’s annual dual meet against Stanford on Saturday, but the Cardinal prevailed by a 193-104 margin at Avery Aquatic Center.

The second-ranked Bears end their dual-meet season with a 7-1 record and will next be in action Feb. 26-29 at the Pac-12 Championships in Federal Way, Washington.

“I think there are some things we can build on,” head coach Teri McKeever said.” As a whole, we have to figure out how we can do a better job that what we showed. Kudos to Stanford – they were on fire today. I’m just disappointed that we couldn’t give them more of a challenge because I do think we have the ability to do that.”

In addition, Weitzeil claimed first place in the 100 free in 47.97 seconds. Cal’s other individual victory came in the 100 butterfly when Isabel Ivey led wire to wire and touched in 53.06.

The Bears also closed out the afternoon with a first-place finish in the 200 free relay as Ivey, Keaton Blovad, Eloise Riley and Weitzeil were timed in 1:29.46, Cal’s fastest in a dual meet this year.

The Bears posted their fastest 200 medley relay in a dual meet, as well, to start the day. Blovad, Ali Harrison Maddie Murphy and Weitzeil were clocked in 1:38.77, but were second to Stanford by 0.08 seconds despite Weitzeil’s 21.05 final leg.

In diving, Briana Thai scored a season-high 312.60 on the 1-meter board to take a close second place, just three points shy of first. She also totaled 322.28 on 3-meter to take third in the event.

Is Brooke Forde Ok?
She missed the trip to UCLA/USC and this week came in third in the 1000y.
Stanford didn’t need her points for the duel meets but sure does in the Pac-12 and NCAA Champs meets.
Hope Brooke is ok, and is just allowing others to score points in the duel meets.

Heard she was sick that weekend with flu or something. Probably still recovering

She was entered in 2IM and didn’t swim it. Same thing for the Arizona and ASU meets. She got scratched from events half way through the meet.

It can sometimes take multiple weeks to fully recover from the flu. Best wishes for a speedy recovery.

This was a beat down but still favor Cal for NCAAs

Stanford has got to be the favorite. Just don’t see Cal winning, not enough stars

As a long time Cal fan, I was not expecting Cal to win this dual meet, and surely some of the regulars on this board must be aware of Stanford’s loaded (as usual) roster. Almost every swimmer was rated in the top 40 nation-wide! With that depth they should win the PAC12 conference hands down. Cal will have to swim lights out to come respectfully close.

As for the NCAA championships, not sure who can beat them, albeit there can be some surprises which could make the meet really interesting.

This is key. Not only is the scoring/events format different for Dual meets vs Championship meets, but the presence of the country’s other top teams last year weighed on Stanford. With 9/22 swimmers on their roster listed as IMers, I believe this is why they can dominate dual meets (Meehan can simply insert one into another stroke event and they will probably win it), but when NCAA’s come everyone is a specialist and an IMer will have to fight for a spot in the top 8.

Cal was #1 or #2 in every relay last year at NCAAs(can they repeat that?), while Stanford was 1 3 3 6 7. Those other teams took away those points which is partially why… Read more »

Yeah same thing happened last year and NCAAs was much closer. I still think Stanford goes in as the favorites, but Cal seems to do very well in the underdog role so don’t count them out. Also, Weitzeil obliterated everyone so there’s that.

Forde swam the 2 breast per results