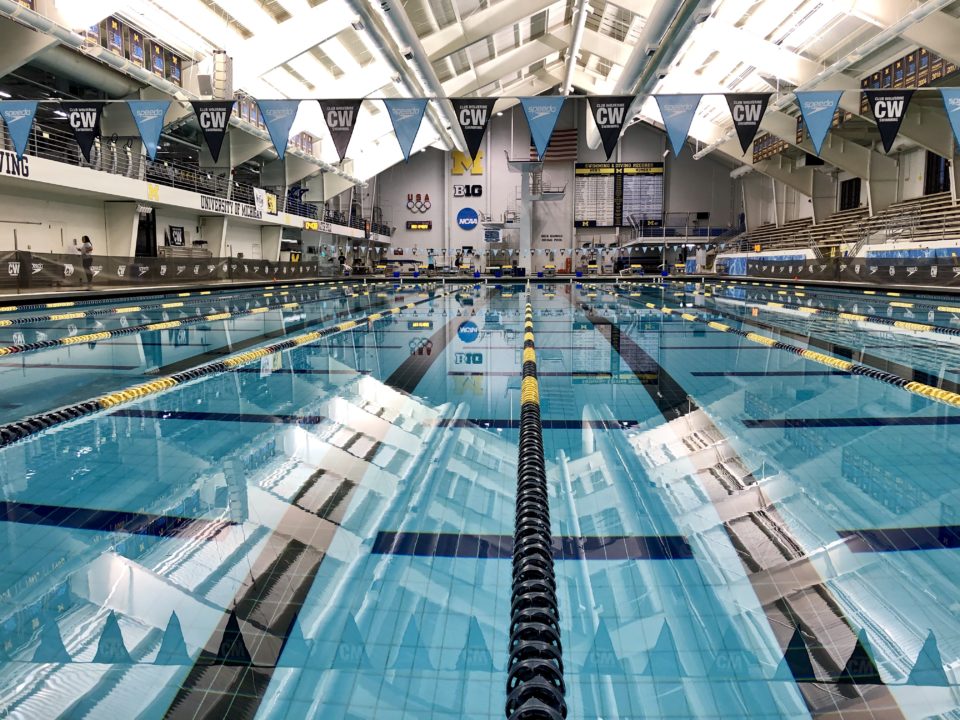 Aaronson swam the 10th fastest time ever by a Michigan man in the 100 back, coming within hundredths of his lifetime best in the 100 free. Archive photo via Gunnar Schmidt

Some of Michigan’s swimmers suited up for their First Chance Meet this weekend as their final contest ahead of the Big Ten Championships. Nadav Aaronson dropped 2 seconds in the 100 back, winning the race in 46.86. Aaronson is now ranked #4 in the Big Ten this season and #10 all-time in Michigan’s record books. His time would have qualified for the championship final at least season’s Big Ten meet. Notably, his 100 back time is now less than a tenth slower than his lifetime best in the 100 free (46.70), which he set a month ago.

Spencer Carl put up a collegiate best 1:37.43 in the 200 free. That’s his fastest time in the event since 2017. He took it out with the lead and held off freshman teammate Donald Scott (1:37.57) at the finish. Scott’s time was also a collegiate best and his 2nd fastest performance ever.

In all, 16 men’s and women’s swimmers suited up and raced on Saturday. Aaronson made the biggest jump, vaulting to No. 4 in the Big Ten this year after going 46.86 in the 100-yard backstroke. It’s also the 10th-fastest time in U-M history.

The Michigan First Chance Meet will continue Sunday (Feb. 16) at Canham Natatorium. Events will begin at 11 a.m., with time trials following at 4 p.m. Admission is free.

Im pretty sure Unalmis’ 400IM and Aaronson’s 100 back would have been A finals last year too. Some fast swimming going on

Aaronson’s would have, as the article states. Unalmis’ would not.

I thought that was a typo in the thread

Where’s UMich’s Top 10 located on their site? Can’t seem to find it

FYI… the record book isn’t updated yet with any times from the current year. It gets updated after the year is over. For example, Jeremy Babinet (51.63) and Will Chan (51.91) both broke 52 seconds in the 100 breast in December.