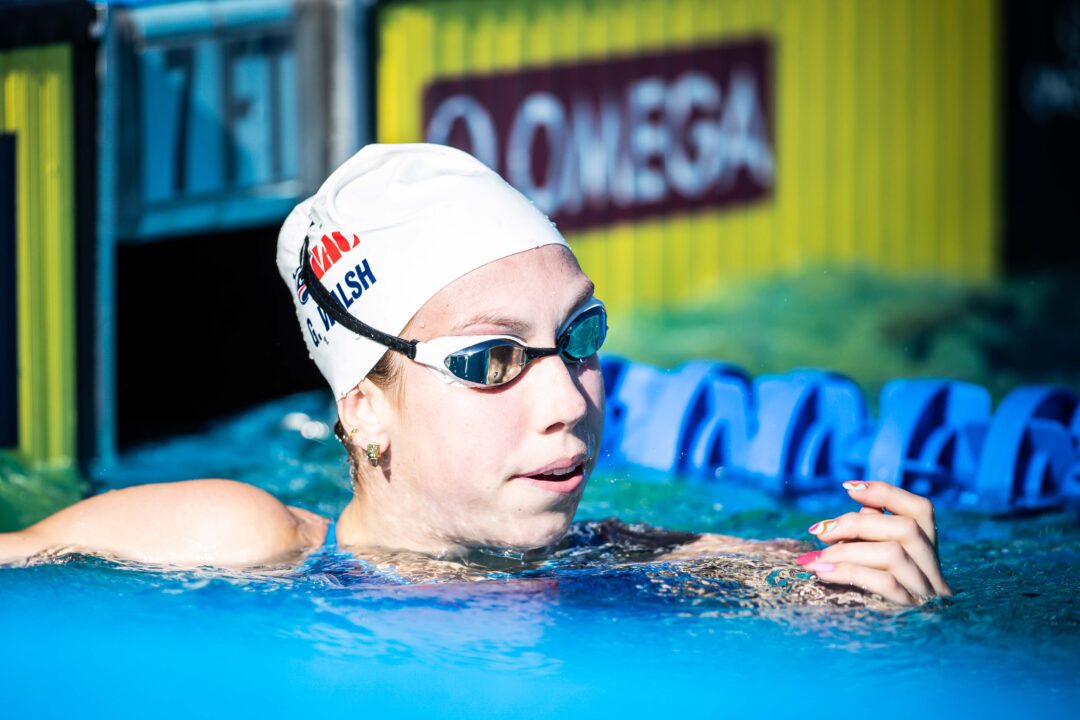 For the second week in a row, a post-invite NCAA-leading time was clocked at a dual meet in a practice suit by a Virginia women's swimmer. Archive photo via Jack Spitser/Spitser Photography

UVA vs. UNC vs. NC State

A week after Kate Douglass swam a nation-leading 1:52.07 200 IM against Virginia Tech, Virginia sophomore Gretchen Walsh put up a 50.07 100 back leading off the 400 medley relay at the UVA-NC State-UNC dual meet. That time is 0.05 seconds faster than Claire Curzan‘s previous nation-leading time of 50.12 set at the NC State midseason invite. In addition, Walsh’s time also beats out her own 50.13 clocked at the Tennessee Invite, and is over a second faster than Maggie MacNeil’s 51.10 that was clocked at the LSU vs. Tulane vs. Vanderbilt dual meet and previously stood as the fastest dual meet time of the season.

As shown in the splits, Walsh improved on her back half from invites to now. However, in her two fastest 100 back swims this season, she was faster than Curzan on her front half but slower on her back half, which gives us a sense of how a race between them would play out during NCAAs.

Throughout the season, Gretchen Walsh has been on fire, and has gained a lot of attention for swimming particularly fast times in dual meets (such as when she clocked the then-fastest 50 fly split ever in a dual meet against Florida). As of now, she still remains undefeated in individual events for the 2022-23 season.

I’m confused: are there two sessions for the meet today?

ella nelson quite close to her best time in that 400 IM tonight. excited to see what she brings in the post season!!

And yet there is the AR 2 time defending NCAA 48 sec champ just chilling and waiting.

Is she the one who seems to prefer “practice suits” over knee skins?

Virginia has potentially three women who could win three events each…

I mean, last year at NCAAs they did win 7 events combined.

UNLESS Alex switches to the 500 free and blows everyone out of the water. Which I think is the obvious move here by Virginia. Go for the full day 1 event sweep

Will Alex Walsh be the favorite in the 500 now that Weyant is back? Currently Weyant has about three seconds on Walsh + Florida distance training. Sooo…..

…and the Gator fanatics have entered the thumbs down brigade.

Hey, big Emma Weyant fan here. But Alex Walsh is going to do Alex Walsh things at NCAAs this year and next year. She’s the most versatile woman swimmer since Tracy Caulkins. All four strokes, any distance, any day, every time.

except a long course 400 IM. The rest I would agree with.

Alex Walsh aint going a 4:31 but shes beating Weyant head to head in whatever event they match up in

Alex Walsh is the most versatile swimmer on earth and always seems to perform at the highest level when it counts, so I’d give the upper hand to her. Still would be surprised if she is put in the 500 over the 200 IM, though.

tbh given how weak the 500 free is in the NCAA right now I think it’s very possible that she does go for it. Last season until the sandpipers start rolling in and prevent anyone else from winning that event lol

Both preparing to transfer?

Coaches said “dealing with family matters.” Boyle is out with an injury, 1-4 week timeline.

and she remained undefeated through her 50 free too 🙂