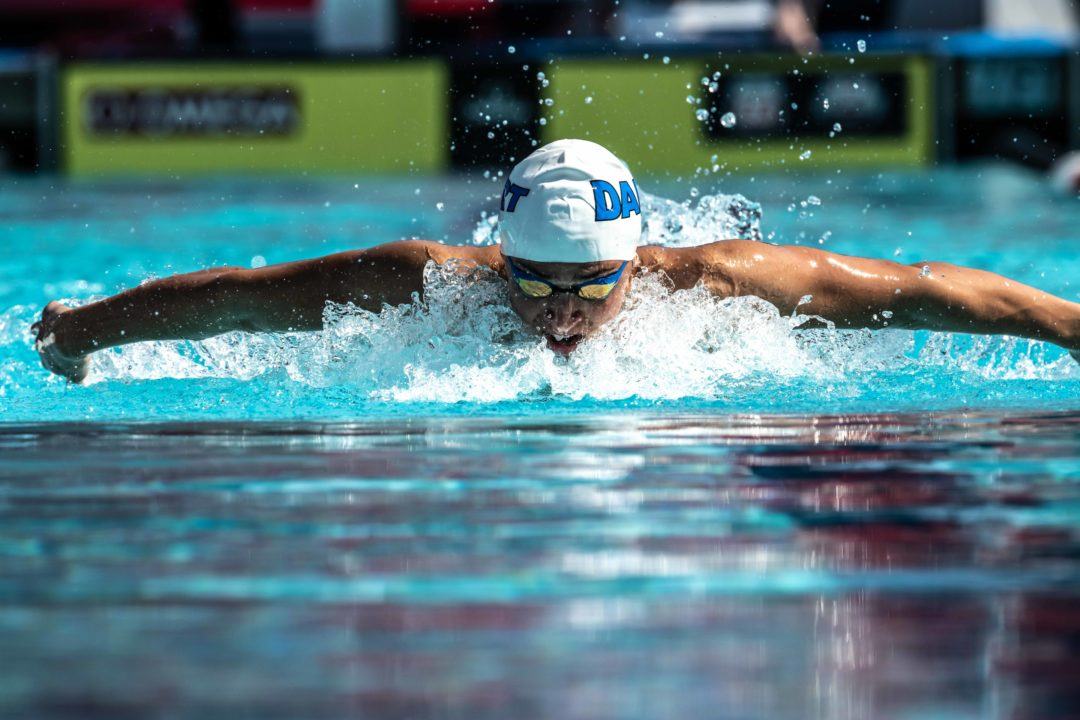 Gianluca Urlando, 16, of DART Swimming broke Michael Phelps' 15-16 NAG and became the youngest swimmer ever to break 1:41 in the 200 butterfly on Saturday. Archive photo via Mike Lewis/Ola Vista Photography

Gianluca Urlando, 16, of DART Swimming in Northern California, became the youngest swimmer ever to break 1:41 in the 200 butterfly when he won his final at 2018 Speedo Winter Junior Championships – West in 1:40.91. He crushed the meet record of 1:43.64 set in 2013 by Baylor Swim Club’s Robert McHugh, and he took a 1.19-second bite out of the 2002 National Age Group Record for 15-16 boys set by none other than Michael Phelps.

Urlando’s swim is the 2nd-fastest in the country so far this swim year (September 2018 through August 2019). Given that we have already had a slew of mid-season college invites, that a 16-year-old boy ranks second is a remarkable thing. Zheng Quah of Cal went 1:39.29 at the UGA Fall Invitational, while his teammate Mike Thomas clocked a 1:41.29. Until Saturday night those were the fastest times in the country this season.

Giving his swim more context, had he gone 1:40.91 at NCAA Division I Championships last March, he would have made the A final at #8 out of heats. Including 2018 NCAAs, Urlando has the 12th-fastest time in the country for the calendar year. Even more remarkably, he ranks 26th on the all-time performers list – for all ages – at only 16.

His splits compared to those of Phelps:

I cant wait to see the future Dressel-Urlando rivalry in the 100 fly.

So did Phelps (at the same age) and suddenly he was one of the best in the 100. Seriously?

Because he also swims the 100 bruh

Urlando might be peaking when Dressel hangs up his speedos lol.

Just watched his 200 yard butterfly race on youtube. His butterfly technique reminds me a lot of Laszlo Cseh. You can tell he’s heavily influenced by Laszlo Cseh.

Not nearly as extreme as Cseh in his upward recovery

We must keep a book that shows record progression. It will show Urlando beat Phelps’ record. We must never forget Phelps.