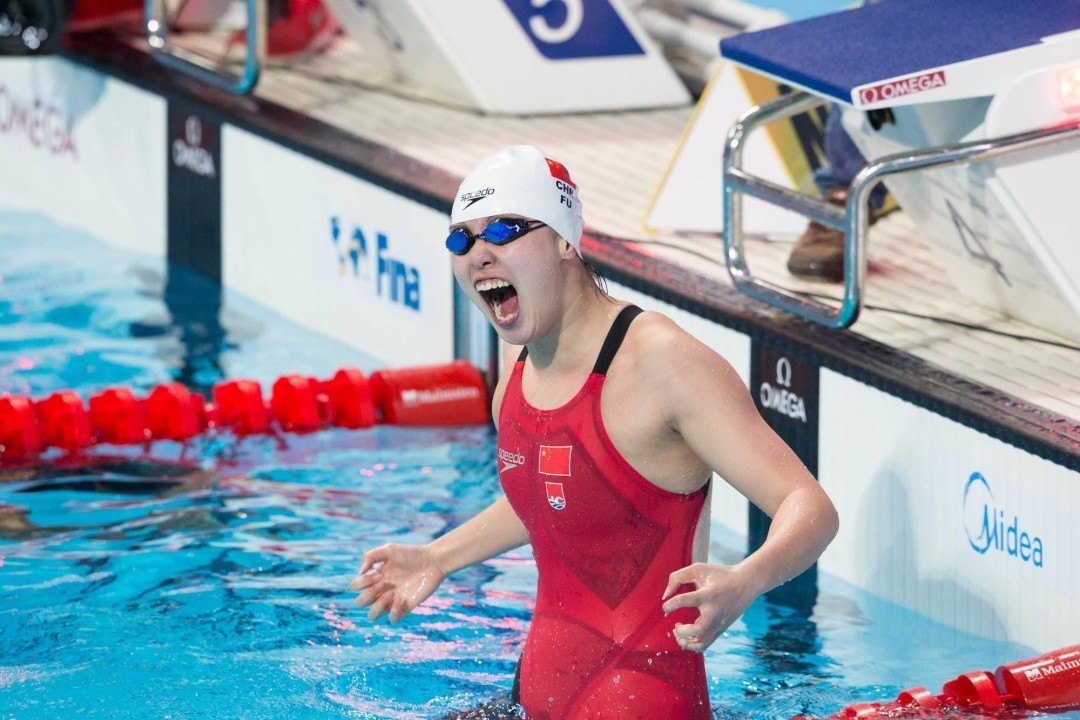 Fu Yuanhui and Xu Jiayu both set Chinese records in the 100 meter backstroke tonight in two electrifying and surprising finals that put both swimmers on the podium. Current photo via Tim Binning/TheSwimPictures.com

Fu Yuanhui and Xu Jiayu both set Chinese records in the 100 meter backstroke tonight in two electrifying and surprising finals that put both swimmers on the podium.

Fu Yuanhui, who tied for bronze in the women’s 100 backstroke with Canadian Kylie Masse at 58.76, broke the former Chinese record held by Zhao Jing at 58.94 set at the 2010 Asian Games.  Jing is also the Chinese record holder in the 200 backstroke; however, Yuanhui will not be swimming the 200 back in Rio.  Yuanhui’s swim also inched closer to the Asian record of 58.70, held by Japan’s Aya Terakawa from the World Championships in 2013 in Barcelona, Spain.  Yuanhui will have another shot at breaking the Asian record Saturday on the final day of competition when she competes in the 4 x 100 medley relay.

Xu Jiayu took a surprising silver between American duo Ryan Murphy (gold and Olympic record) and David Plummer (bronze), and beat out Australian favorite Mitch Larkin for a spot on the podium.  Jaiyu’s time of 52.31 lowered his own Chinese record by 0.03 and also took a lunge towards the Asian record held by Ryosuke Irie of Japan, which stands at a 52.24 from September of 2009.  Jiayu will also have another shot at breaking the Asian record on Saturday in the 4 x 100 medley relay.  Now a powerhouse in the sport of swimming, Chinese supremacy hit a critical mass in 2008 at the Beijing Games and has shown no sign of slowing down.

If Yuanhui were to break the Asian record for the women’s 100 back Saturday, China would own all but one Asian record on the women’s side of the board.  The only two Asian records held by non-Chinese swimmers on the women’s are the aforementioned 100 backstroke by Terakawa, and the 200 breaststroke, which is held by Rie Kaneto of Japan.  For the men, every record is held by either a Chinese or a Japanese man with the exception of the 50 breaststroke, held by Kazakhstan’s Dmitriy Balandin, and the 100 butterfly, held by Singapore’s Joseph Schooling, who may yet improve the 100 butterfly record in Rio.

Don’t think Schooling is the holder for 200m fly. Matsuda should be the one breaking the record in 2008