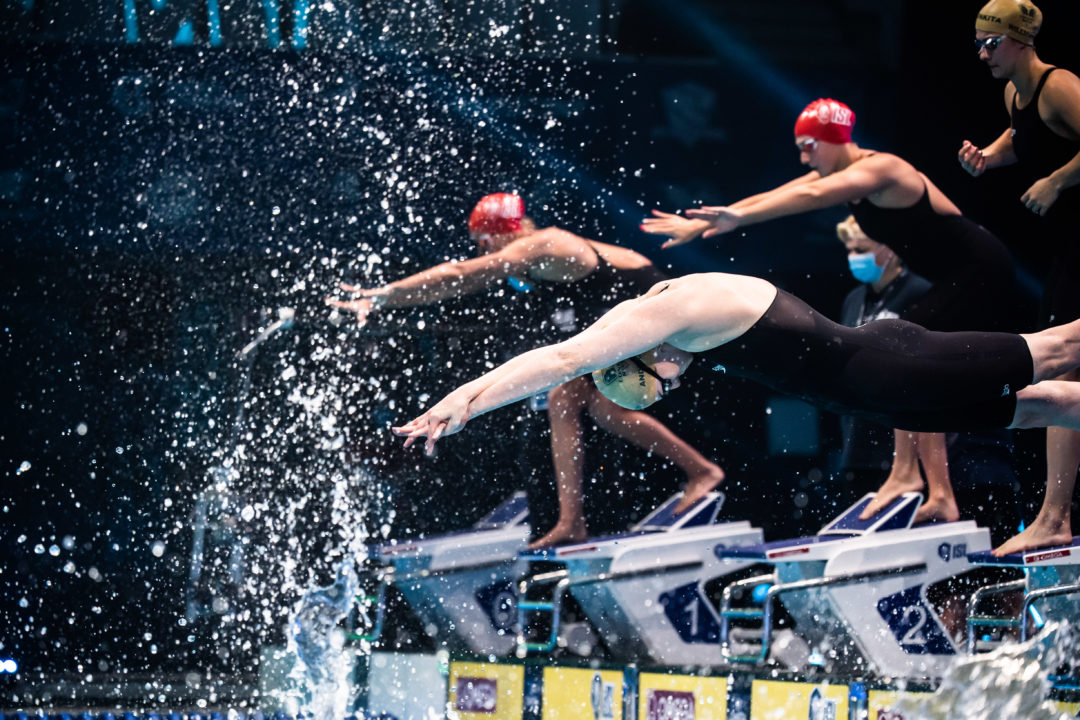 The 19-year-old Brit anchored the Roar in a blazing 50.96 to run down Cali's Erika Brown and win the mixed 400 free relay in Match 8. Current photo via Mike Lewis/Ola Vista Photography

Unlike what we saw earlier in the day from Energy Standard, absolutely dominating the field in Match 7, the mixed freestyle relay in Match 8 was an exciting, razor-thin battle that came down to the wire.

Despite the Cali Condor men building over a second lead at the 200m mark, it was London’s female duo of Anna Hopkin and Freya Anderson who roared home to steal the win by 12 one-hundredths of a second.

Below we’ll dive into the relay’s splits, including Anderson’s incredible 50.96 anchor:

Justin Ress got Cali off to a fantastic start, beating London’s Duncan Scott by a full second in 46.49 to slip under the personal best time he set earlier in the session in the individual event (46.53).

Scott has been much quicker this season than the 47.49 he went here, but it’s a difficult turnaround for him after swimming the 200 free. He’s been as fast as 46.66 individually in Budapest, but was a similar time (47.32) leading off this event in Match 5.

In the last swim of his career, Pieter Timmers delivered.

The Belgian, who competes for the New York Breakers, dropped the fastest male split with a takeover in 46.64, moving his club into second place. The swim marks his fastest of the season, surpassing a 46.65 from Match 1. He also split 46.73 on day one’s medley relay, and placed fourth individually in the 100 free earlier in the session.

Tate Jackson came through for the Condors, who opted to rest Caeleb Dressel, as the University of Texas grad clocked in at 46.70 to outdo London’s Mikhail Vekovishchev. Vekovishchev was solid in 46.88, but still well off his 45.94 from day one.

Katsuhiro Matsumoto, who, like Scott, was coming off the 200 free, had a strong sub-47 leg for Tokyo.

At the halfway mark, Cali’s lead sat at 1.12 seconds over London. Anna Hopkin took seven-tenths out of Olivia Smoliga, splitting 51.57, and then Erika Brown dove in with Freya Anderson hot on her tail.

Brown extended the Condor lead through the first 50, up nine-tenths on Anderson, but the British sensation came home in a scintillating 26.04 to edge Brown at the wall by .12.

Anderson’s anchor leg was 50.96, her first-ever sub-51. The 19-year-old had previously been 51.04 during Match 5. It also can’t be overlooked that Anderson won the 100 and 200 free prior to this race, setting a new British Record in the latter. The three swims all took place within about 72 minutes.

The swim marks the second sub-51 female relay split we’ve seen so far this ISL season, with Sarah Sjostrom dropping a 50.67 yesterday on Energy Standard’s medley relay. According to USA Swimming’s database, the split ties Anderson for the 11th-fastest swim of all-time (with a takeover), and makes her the sixth-fastest relay performer in history.

The swim from Brown, however, can’t be overlooked, as the former Tennessee Volunteer hit her second straight career-best in 51.50. Brown broke 52 for the first time yesterday in 51.94.

Hopkin and Kasia Wasick have consistently been sub-52 all season, and Natsumi Sakai followed up her all-time best 52.06 yesterday with a quick 52.23 to move Tokyo up one spot to fourth on the anchor leg.

Congrats Pieter on a great career what a way to go out on your own terms!

Everyone’s talking about Anderson (and rightly so) but let’s talk about how useful Hopkin has been on these relays. Almost every single relay she has been on she has gone sub-52! She is so valuable on those relays for increasing depth and adding speed. Would kinda like to see how good her individual 100 and 50 are.

Agree, I’d like to see Hopkin get a crack individually, she has earned it – Pulled many points for the team as the pivotal leg in more than one relay now.

SEND A BLOODY 4×100 WOMENS TEAM TO TOKYO. Hopkins/Anderson +SMOC/Wood/Hope/whoever would probs be 4/5th best on paper so it ANNOYS me that they’re refusing to allow them a chance to qualify. Hmmmmmm @britishswimming do your job

Yup, after a hiccup in match 1 she’s been gold and it’s a shame she’s been relegated to relay only. They should at least give her a lead-off on the 4×100 free.

Such a shame we won’t be seeing Pieter swim 100 free again – He made it look uniquely easy at his best – You won’t see many smoother. Didn’t realise Jacob Whittle went 47.7 leading off the relay – Such an impressive kid.