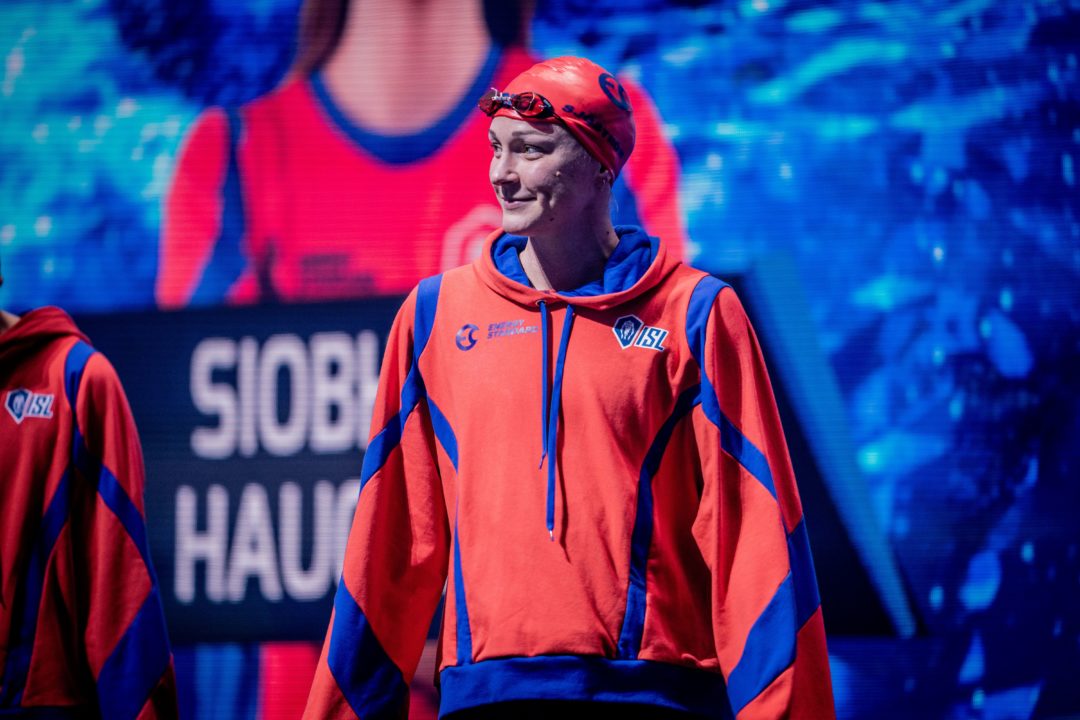 Sjostrom, who sat out of Energy Standard's last match with back issues, unleashed the sixth-fastest women's 100 free split in history. Archive photo via Mine Kasapoglu

In the opener of Thursday’s ISL doubleheader, Energy Standard maintained the momentum they had created during Match 6, winning three of four relays to close day one of Match 7 with a 71-point advantage over the Toronto Titans.

The relays in particular yielded some eye-popping swims from ENS members, including Sarah Sjostrom, who was on the bench last match with back issues, and Kliment Kolesnikov, who had a shaky start to this season but appears to be rounding into top form at the right time.

Below, we’ll take a closer look at the splits from the day’s four relays.

There wasn’t anything extra special done on the lead-off legs of the women’s 400 free relay, but Pernille Blume put together a solid 52.46 to give Energy Standard the early lead in what was her first flat-start 100 of the season. The Dane’s fastest 100 free relay split thus far was a 52.15 on the mixed free done in Match 6.

53-flat was a new season-best for Toronto’s Anika Apostalon, and her teammate Louise Hansson was right on par where she’s been this year to put the two Titan teams in the top-three early.

There was once again just the one sub-52 leg on this relay, not surprisingly coming from Siobhan Haughey, as we continue to see the women muster faster swims anchoring the medley. Energy Standard had held the lead through the 200, and then Haughey (51.76) and Toronto’s Michelle Coleman (52.09) put up the relay’s top-two swims to really separate the clubs from the pack.

Femke Heemskerk, Rebecca Smith and Lucy Hope were all within .07 of one another to anchor in the top-three clubs, with Hope moving Energy’s ‘B’ squad up from sixth at the 300.

Ky-lee Perry, who has been as fast as 53.13 this season for the DC Trident, was 54.04 anchoring which allowed Hope to sneak in for third.

The Titan men would need all four of their legs to execute if they had a chance to win, and Yuri Kisil got them off on the right foot with a new personal best time of 46.76. Kisil, who had previously been 46.79 at the 2016 SC Worlds, led off the mixed relay in Toronto’s first match in 46.82, but was a bit off last time out in 47.44, so this was a nice bounce-back.

The Canadian landed Toronto almost a full second lead on Energy Standard from the jump, with Simonas Bilis a bit off of his only other flat-start 100 this season (47.16) in 47.71.

Kliment Kolesnikov really proved he’s back on top form with this performance, doing so from Energy Standard’s ‘B’ team no less. Hindsight is 20/20, of course, but if the Russian had been swapped for Matt Grevers on the ‘A’ relay, Energy Standard would’ve won.

Kolesnikov’s previous fastest split all-time was 45.46 from the 2018 SC Worlds, while a 46.97 lead-off is his fastest swim from this season.

Blake Pieroni turned in his first sub-46 split of the season for Toronto, doing so while going head-to-head with Indiana training partner Zach Apple, who went 45.81 swimming third for DC.

That put the two clubs 1-2 at the 300, but Florent Manaudou managed to anchor Energy Standard past the Trident’s Ian Finnerty to claim second.

For Toronto, veteran Brent Hayden came through on the anchor leg, producing his third sub-47 of the season, while Michael Chadwick was also strong in 46.66.

In her second swim back from injury, after winning the 50 free earlier, Sarah Sjostrom dropped one of the fastest legs in history on Energy Standard’s anchor.

The swede split 50.67, which is sixth-fastest all-time according to USA Swimming’s database. Sjostrom’s flat-start best is 50.58, and had won the 100 free at Match 1 in 51.17 (faster than all three of her relay legs). The individual world record stands at 50.25 from Cate Campbell, and the top relay split on record is a 50.38 from Campbell.

Energy Standard already held the lead when Sjostrom dove in, as Emily Seebohm, Benedetta Pilato and Anastasiya Shkurdai all swam well on the first three legs. Shkurdai equalled her fastest butterfly split ever from Match 1 in 55.34.

On Energy’s ‘B’ team, Femke Heemskerk produced her fastest split of the season on freestyle, rocking a 51.36 for her third time under 52.

Evgeny Rylov also snuck under 50, while Shane Ryan set a new Irish Record for Toronto in 50.20.

Ilya Shymanovich reeled off another sub-56 breast leg for Energy Standard (55.60), and Chad Le Clos was a class above on fly in 49.27. They led by the better part of two and a half seconds, with the ‘B’ team in second, so Manaudou cruised in for the win with a 47.09 on free.

Pieroni churned out his second 45 of the day for Toronto, moving past Iron for third by just over a tenth of a second.

Robert Glinta made his first appearance of the season for Iron today, following up a second-place finish in the 50 back with a 50.49 lead-off here. However, the relay would end up being disqualified after freestyler Thom de Boer jumped early.

Finnerty is a joke this season