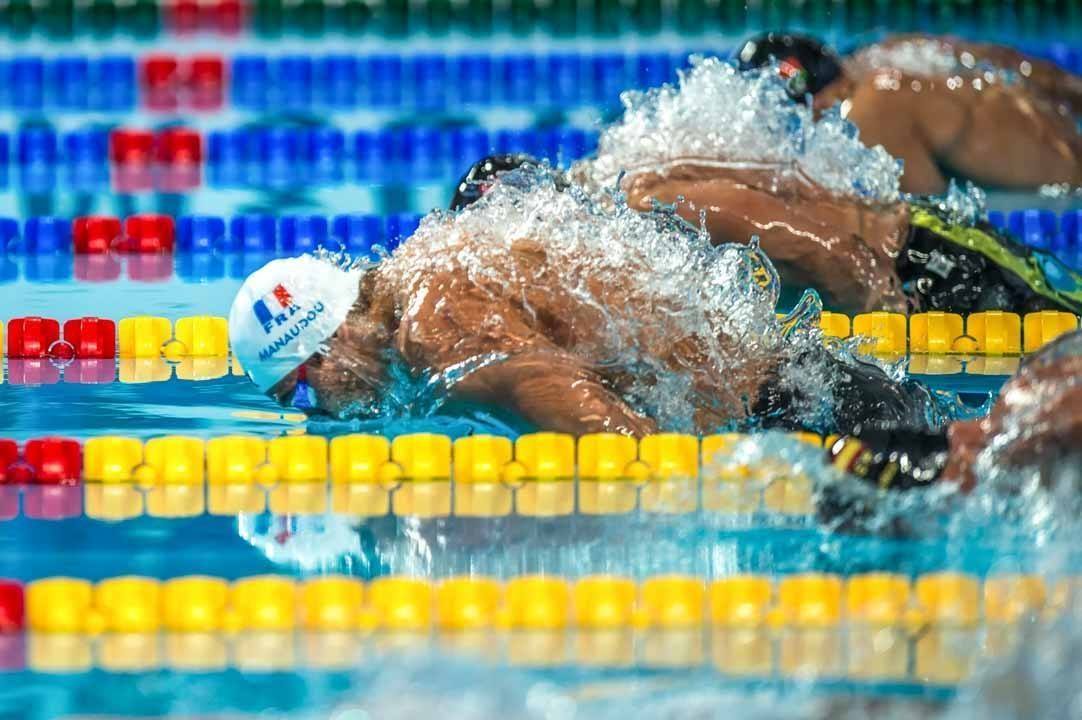 A second gold medal vaulted France to the top of the pool swimming medal table two days into the 2015 FINA World Championships in Kazan, Russia.

That gold came courtesy of Florent Manaudou, who continues to show unparalleled short speed, winning the 50 fly in a crushing 22.97.

That wasn’t even quite as fast as his French-record prelims swim of 22.84, but still won gold by over a tenth.

There have only been 8 pool swimming gold medals awarded so far, and between Manaudou and the 4×100 free relay, the French have won two of them.

In tow is Great Britain, which finished off a nice morning with four total medals, the most of any nation. Adam Peaty won 100 breaststroke gold on day 2, and Ross Murdoch stole bronze in a big medal haul for the Brits. Meanwhile Siobhan-Marie O’Connor picked up bronze in the women’s 200 IM.

16 teams have already won medals, a true testament to parity with only 25 total pool medals given out so far.

China still maintains its lead in the all-sport medal table, thanks to a huge haul on the diving boards. The host nation of Russia sits second in that tally, with the United States in third place.

There are still 6 days of the World Championships left, with 34 gold medals yet to be awarded in the pool. Only 4 other golds (two in high diving and two in water polo) remain up for grabs, so this medal table could change drastically by meet’s end, based on pool results.

Totally surprised by the kind of disappointing performances of the American swimmers. OK, Ledecky is doing wonders, and Lochte had a great semifinals swim, but where are the relays, or the sprinters? Maybe too early to judge. And let’s not even mention Russian swimmers. I cannot imagine what type of commentaries are going on there after such thin performances on home soil. I was expecting them to be among the top 4-5 nations even from the beginning. Hope Hungary can finish somewhere around top 5-6, but that would probably need a miracle and the miracle is called an incredibly tireless Katinka, and perhaps a “reborn from his ashes” Cseh.

I have a lot of respect for Cseh.
Truly a great champion who has not been lucky to be in the MP/Lochte generation.
He could have given up but no, he’s still among the best and even medals in the 50 fly now. Who could have predicted that 10 years ago? Amazing!

Yes, he is a true role model in Hungary. But because he doesn’t have a star’s allure, and likes to stay away from the spotlights he doesn’t seem to get the appreciation and acclaim that I think he should deserve. Even in Hungary the names of Gyurta and Hosszú way overshadow his fame, when normally he should be mentioned in the same sentence with them two. But yeah, when you don’t have the looks and a good marketing team behind you than you will get fairly unnoticed through the years, as he did. I predict that he will be a significant gold contender in 200 fly and IM. It really depends if he has faith in himself, because usually he… Read more »

And about US performances so far, it’s well too early to judge.
But I don’t see too many bad surprises for USA in these first 2 days.
1. The men’s relay. US coaches have played in prelims. They have lost. Ervin swam a disaster leg. But anyway even with Lochte and Adrian they couldn’t expect a medal in final. Just a lack of talent on sprint. Nothing new. Time to see new faces.
2. Jessica Hardy who, on paper, could medal.
Except these 2 cases, I don’t see other disasters.
Missy doesn’t swim at her best in long course since the summer 2013. We couldn’t expect huge things from her this week. Wait for next… Read more »

It seems like every national competition we have to put up with some boneheaded move by the US coaching-staff-by-committee. This year we have two — second, to let Nathan Adrian sleep in, and first, to pick the team a year in advance.

Manaudou and our male sprinters are really the tree that hides the forest.
3 swimmers out of 14 have qualified after prelims in the first 2 days.
But let’s enjoy these last golden moments of glory.
After Rio French swimming will disappear from the headlines with the likely retirements of Agnel, Gilot, Lacourt, Stravius, Balmy or Bousquet.
Hopefully the beast Manaudou will stay in action until Tokyo.

Maybe those you mentioned have inspired younger generations to pick swimming. It may bode well for France in the future.

If i’m right, Agnel is actually one year younger than Manaudou. Unless he makes big plans or personal health/preference, I don’t see why would Agnel retire at young age…

2nd place for GB – won’t last but great to have 3 times as many medals as we won last time out already!