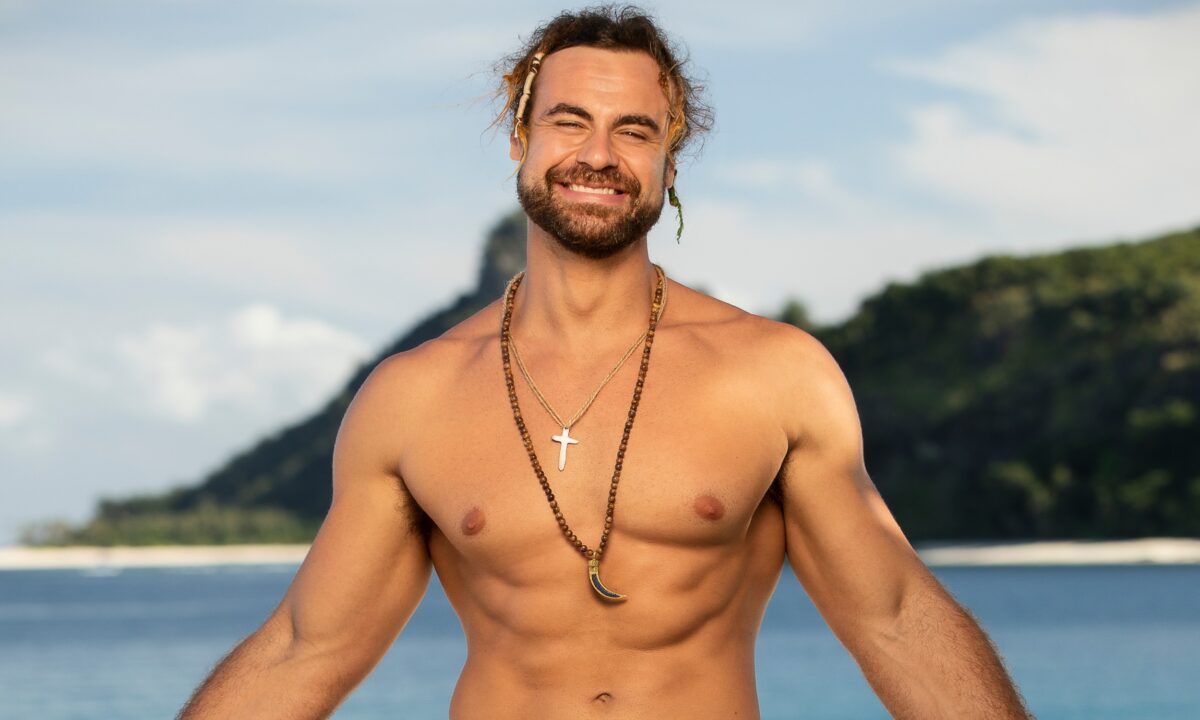 Another reality television personality has claimed to be a former elite-level swimmer. This time, the claims hold a little more water. Current photo via Robert Voets/CBS Entertainment

On the new season of Selling Sunset, realtor Emma Hernan claimed that she was an Olympic-qualified swimmer. After a detailed investigative report, we found no evidence to support her claim. Thus, people were rightfully a little suspicious when Jonathan Young, a contestant on the forty-second season of Survivor, mentioned during a confessional that he had swum in college.

Unlike Hernan’s case, we actually can find evidence that Young was a swimmer; he’s on the University of Alabama’s 2013-2014 roster. The Gulf Shores, Alabama native is listed as a freestyler.

He doesn’t appear on the team’s roster for any other year.

Before college, he swam for Orange Beach Swim Team. His best times come from his time with the club. In his primary events, the 50 and 100-yard free, his best times are 20.85 and 46.40, respectively.

Throughout this season of Survivor, it was clear that he is strong in the water as he led his tribe through in-water challenge courses. His skill was most on display during the third episode’s immunity challenge, where he pulled his tribe through the water section which the other two tribes couldn’t complete due to the turbulent waters.

He won two individual immunity challenges. Because of this, other people saw him as a shield, even though castaway Lindsay Dolashewich also won two immunity challenges. Young’s alliance from his original tribe remained strong until the final days of the game, despite Young making comments about his female allies that some audience members viewed as misogynistic.

Young made it all the way to the final four, accruing only seven votes against him in the process. At final four, he was selected to make fire for a seat in the final three. He lost to Mike Turner and became the final member of the jury. The next night he cast his vote for Turner, the only jurist to not vote for winner Maryanne Oketch.

Survivor attracts many former professional athletes. Ex-NBA, MLB, and NFL players have all tried to be the Sole Survivor, though their strength and assumed wealth makes them targets. Young is not the only swimmer to be on the show, Olympian Elizabeth Beisel competed on Survivor: Island of the Idols, the controversial thirty-ninth season of the show.

Interestingly, though Young placed much higher than Beisel, who finished twelfth, due to Survivor changing their format from 40 days to 26 in the wake of the pandemic, Beisel survived on the island for longer than Young. She lasted 30 days, while Young was there for 25.

I was hoping he would win early in the season.He really worked hard winning
challenges. He kept his tribe from going to tribal counsel many times.
Sorry,women thought he was a misogynist.( Lindsey).

People recognized him as a misogynist because he showed himself to be. He was completely dismissive of anything women said to him, often not allowing them to even finish the thoughts they were trying to express. I was Team Jonathan all the way until that happened. Very disappointing.

Love Jonathan. I wished he would have won Survivor 42.

Thanks for spoiling it

This article needs to be updated to disclose Jonathan’s poor behavior. Please read the about the stories of those who had to interact with him https://ew.com/tv/survivor-42-lindsay-dolashewich-finale-interview/

You know those shows are all fake right?

I did not think when scrolling thru Swimswam today that I’d see a spoiler about the final episode of Survivor that I haven’t finished watching yet! 😉

Show did a terrible job portraying him. Everyone seemed like they got along very well so production maxes lots of edits to create drama for viewers at home. People want to talk about breaking stereotypes on the show but whenever they got a chance to take a shot at Jonathan they called him a big idiot when he clearly had some social skills. Not saying he was a genius strategist but just putting my thoughts out there

Please read the about the stories of those who had to interact with him https://ew.com/tv/survivor-42-lindsay-dolashewich-finale-interview/

Just because someone is called something does not make it true. Jonathan and Mike were the most level-headed players out there. Lindsay was quite bitter and not just with Jonathan. She was a great game player, but she took everything personally. In the end, its a game for TV. It’s edited however the producers want the season to be portrayed.

Based on the other player’s post game responses, it sounds like he was given a generous edit. He objectively made strategic and social errors on the show, which shaped people’s perception of him when the whole point of the game is to have people like and respect your game enough to give you $1 million dollars.

Gee!..I’m a Black woman that was hoping he would win . I did not hear him
refer to a Black woman or women as being aggressive..I guess that was during
the time I went for snacks or to the bathroom…You just never know how one
will perceive another.🤔🤷🏼‍♀️

This was conveniently left out of the article… along with being misogynistic, he also called a black woman aggressive during a conversation about race. Not a fan of him, but hey he was great at swimming on the show!

People can be aggressive and it may have nothing to do with her being black. I get the danger of perpetuating the stereotype, but sometimes it is in fact TRUE that people are aggressive.

Agreed. After the discussion too he apologized to the black girl drea and she clarified to him that she was not accusing him of being racist but just saying she was upset about the overall situation. She also said she had been acting impulsive because she was hangry and that Jonathan was probably even more hangry cause he lost 50 lbs

lol the last sentence in your post didn’t happen, but ok

Did you watch the show? Maryanne was anything but agressive

Who was he talking to or referring to as being aggressive -Drea,
Maryanne or Chantelle. Maryanne does not have an aggressive bone
in her body.

Fair enough but in this specific situation he conflated a black woman’s passion on what she was speaking about, which was not even directed at him, as aggression. Exactly perpetuating the stereotype.