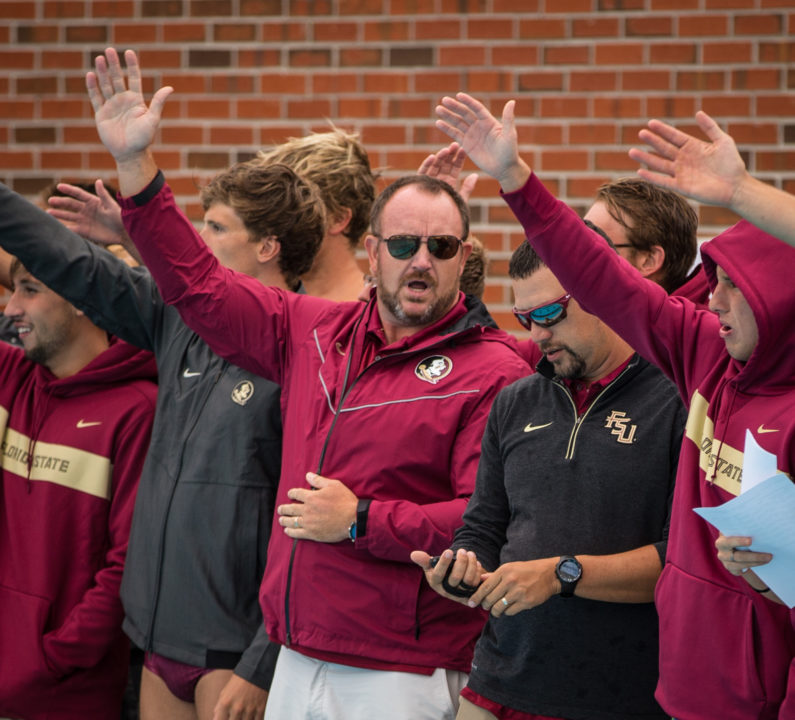 After two nights of swimming-only competition at the Greensboro Aquatic Center–as well as a vital diving competition that wrapped up last week–the Florida State Seminoles are sitting third in the overall team standings at the 2020 Men’s ACC Swimming & Diving Championships. At the conclusion of Thursday’s finals session, FSU was hunkered between the University of Virginia and the University of Louisville in the team standings with two full days of competition to go–frontrunner NC State, meanwhile, led UVA by 50 points.

The early leg-up the Seminoles received from diving might appear to give them only a temporary advantage, but FSU’s swimmers are especially solid this year. While the Seminoles have conceded some of their early diving points to perennial ACC powerhouse Virginia, the Tallahassee-based Seminoles have plenty of firepower remaining to tip the scales back towards their favor.

With two more days of swimming remaining every team’s final standing is uncertain, however, a look at Swimulator rankings shows Florida State finishing 2nd in the team championship, indicating the Seminoles might be in for a comeback over UVA, who currently sits second.

Florida State had six men in the finals of the 50 free. The one with the slowest time in the individual 50 free tonight proved to be the relay hero.

From the get-go, we expected this to be a battle between NC State, Louisville, and Florida State, and a 19.19 leadoff leg by Korstanje put the Wolfpack in the lead early. A 19.09 2nd leg by Andrej Barna moved Louisville into the lead, and they held that as the anchor legs dove in. Max McCusker, who finished 21st individually tonight with a 19.75, dove in and split 18.93, running down Louisville’s anchor Tanner Cummings to give FSU its 2nd-straight victory in this event, touching in 1:16.69 to Louisville’s 1:16.94.

Notably, Louisville came within a whisker of drawing a relay disqualification for the second straight night row, as Cummings’ reaction time was -0.01s, considered to be within the margin of error and therefore not drawing an automatic DQ, but cutting it close.

NC State seemed to be focusing on safe relay starts and ended up 3rd in 1:17.70. Virginia Tech, meanwhile, actually put up the 4th-fastest time of the night while swimming in the initial heat, also slipping under the NCAA ‘B’ cut with a 1:17.84. Tommy Hallock split under 19 for the second straight tonight, swimming the 2nd leg in 18.83.

Boston College DQ’d due to an early takeoff by the anchor leg. Miami scoring 197 diving points already meant that BC was unlikely to pass them in the team totals, given that they were only likely to score a handful of individual points, but a relay DQ would seem to end whatever hope they had.

SCORES THROUGH DAY 2 (INCLUDING ALL DIVING POINTS)

We’re not about mincing words here, and this was not a particularly fast event, as only three teams hit this year’s NCAA ‘B’ cut. NC State won with a 1:24.13, almost two seconds slower than their winning time of 1:22.37 from last year. Coleman Stewart led off in 20.83, fairly in line with his 20.75 leadoff last year, Rafal Kusto then split 24.30 on breast, Luke Sobolewski put up a 20.38 fly split, then Nyls Korstanje brought it home in 18.62. NC State has now won this event six of the last seven years, despite only Stewart and Korstanje returning from last year’s team, and Korstanje switching to free after splitting 19.81 on the fly leg last year.

Florida State took 2nd. Senior Griffin Alaniz led off in 21.13 to put FSU in 3rd off the bat, then they got a pair of strong legs in the middle of the race from Izaak Bastian (23.93) and Max McCusker (20.24) before Jakub Ksiazek anchored in 19.21 to touch in 1:24.51. While that’s nearly a second slower than their time from last year, only Bastian returns from their 2019 relay, and everyone other than Alaniz are sophomores.

The next four teams all finished between 1:24.95 and 1:25.03, with three of those four teams racing each other in the second heat. Georgia Tech came out on top, thanks large to Caio Pumputis‘s 23.77 breast split and a 19.22 anchor by Corben Miles.

Louisville, the 2018 champion in this event and last year’s runner-up, actually touched first by a wide margin, but was disqualified for an early takeoff by the anchor. Mitchell Whyte led off in 20.82, Evgenii Somov split 23.26 on breast, and Nick Albiero went 19.84 on the fly leg. All of those times were the fastest in the field. Mihalis Deliyiannis split 18.48 on the anchor leg, but drew the disqualification with an -0.08s reaction time. Even adding a few tenths onto that for a safe start would’ve given Louisville a time well under 1:23 and a very comfortable win. That DQ could cost Louisville big time in what should be a race for 2nd place against UVA.

Like we said, this race was much slower than last year. NC State was the only team under the ‘A’ standard, whereas last year four teams were under that cut, and another three teams finished under the ‘B’ cut.