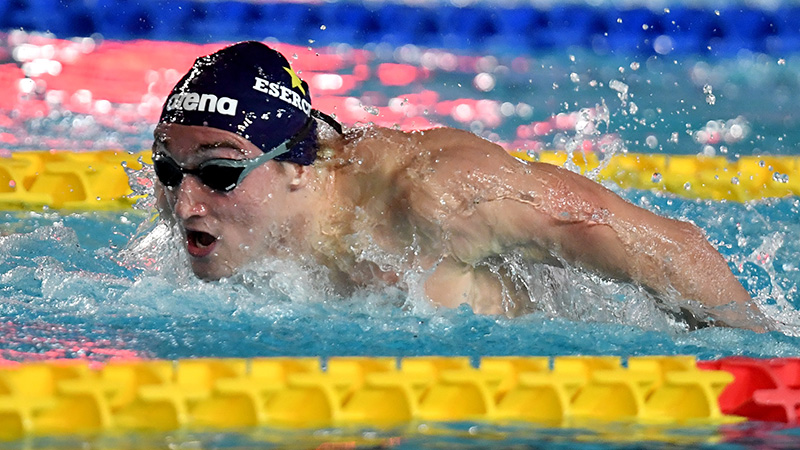 While racing at the Short Course Italian Coppa Brema cluster in Pietralata, 18-year-old Federico Burdisso stopped the clock at 1:52.52 in the men's 200... Archive photo via Andrea Staccioli / Deepbluemedia / Insidefoto

While racing at the Short Course Italian Coppa Brema cluster in Pietralata, 18-year-old Federico Burdisso stopped the clock at 1:52.52 in the men’s 200-meter butterfly.

That time takes down the prior national record established at 1:52.61 by Alberto Razzetti during the 2019 Short Course European Championships, which took place in Glasgow, Scotland earlier this month.

Last week, Burdisso brought his competition hiatus to an end returning to the races at the Pietralata stop of the Coppa Brema.

Earlier in the fall, Burdisso chose to not race at the Glasgow 2019 Short Course European Championships in order to focus on the long course portion of the season.

Racing at the 2019 long course Italian Championships, the 18-year-old snagged the bronze medal in the 100-meter butterfly after notching a time of 52.51.

However, in the 200-meter butterfly, Burdisso failed to hit the qualifying standard for the Tokyo 2020 Olympic Games, the same event in which the 18-year-old won the bronze medal during the 2018 long course European Championships, which settled at Glasgow’s Tollcross International Swimming Centre.

Although the Burdisso siblings have been announced as part of Northwestern’s Class of 2023, neither of them appear to be on the university’s roster as of yet. The university’s Sports Information Director (SID) wouldn’t budge on anything.