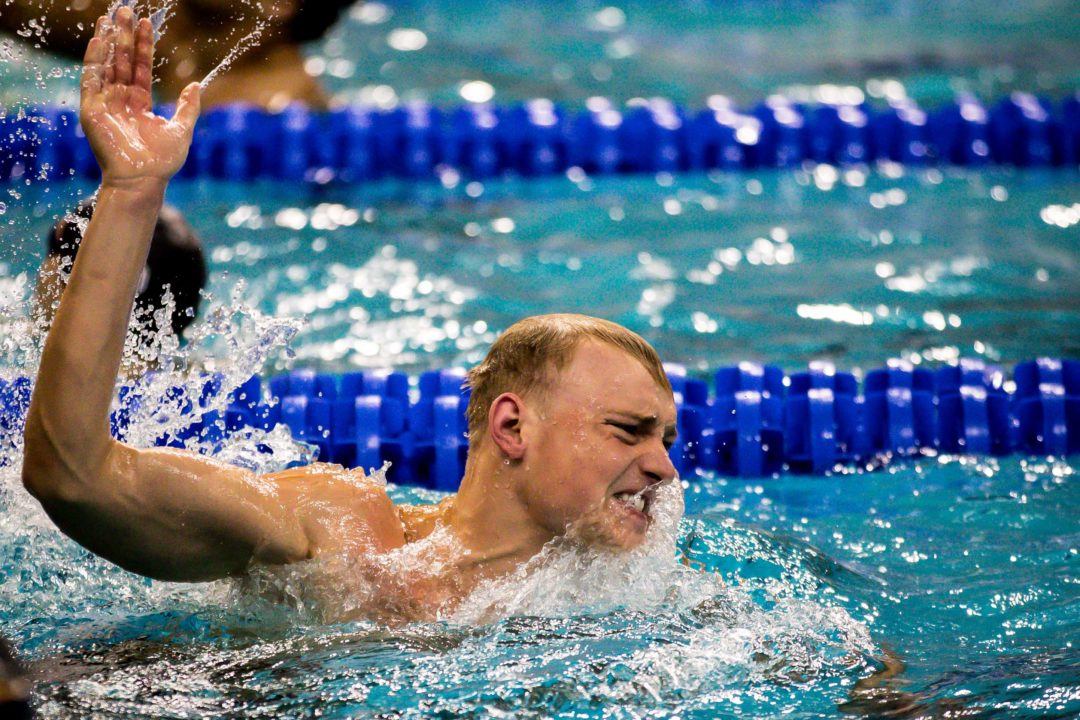 Two men had historic NCAA performances, but in the end, Seliskar's three victories earned him the 2019 Swammy Award for Male NCAA Swimmer of the Year. Current photo via Jack Spitser/Spitser Photography

Coming out of high school, Andrew Seliskar was one of the most versatile recruits of all time, with NCAA qualifying times in a bevy of events. Fast forward three years, and heading into his senior campaign, Seliskar was 9-9 in making NCAA individual A-finals, but had yet to earn an individual event title.

We got a hint of what might be in store for Seliskar’s senior year during the summer of 2018 , when he won the US National title in the 200 free, despite that not being an event he’d focused on much in long course.

On the opening night of NCAAs, Seliskar led off Cal’s 800 free relay with a 1:30.14, the 4th-fastest performance ever, although that performance by somewhat overshadowed by Dean Farri’s otherworldly 1:29.15 in the heat before.

Seliskar never slowed down from there. Despite earning his reputation as an IM and 200 stroke guy, he showed his off sprint chops by anchoring Cal’s victorious 200 free relay in 18.40, the 4th-fastest split in the field. (The three men who outsplit him — Ryan Hoffer, Justin Ress, and Tate Jackson — all made the A-final, indicating that Seliskar, despite “not being a sprinter” could’ve done the same).

Less than an hour after that split, Seliskar competed in the 200 IM, having become only the 5th man to dip under 1:40 in that morning’s prelims. Seliskar treated the crowd to a thrilling exhibition, running down NC State’s Andreas Vazaois with a 24.05 free leg, and touching in 1:38.14, a scant single one-hundredth off of the fastest time ever in the event, which Caeleb Dressel did at 2018 SECs.

Seliskar’s 3rd race of the night was the 400 medley relay, where his 44.32 split on the fly leg was instrumental in Cal holding off Texas for 2nd place.

Even though Seliskar owns the 6th-fastest time in the 400 IM, he opted to swim the 200 free against a stack field that included Townley Haas, who had owned the US Open record until Farris’s swim on Wednesday night, and who had not lost the event in his first three NCAA campaigns.

Seliskar, Haas, and Zach Apple were all within two-tenths of each other at the halfway point, but Seliskar swam away from the field with a unheard of 22.83 split on the third 50, ultimately winning by well over a second with a time of 1:30.14 that tied his performance from Wednesday night, and making him the only man who’s gone 1:30.1 or better twice.

Cal had things pretty well in hand by Saturday morning, but Seliskar didn’t relent, winning the 200 breast in 1:48.70, making him the 3rd-fastest all time, and anchoring Cal’s 400 free relay with a 41.10, as the Golden Bears trounced the Longhorns (and everyone else) by 85 points.

You forgot to mention that most importantly he led CAL To D1 Men’s NCAA Championship.

“helping Cal end a four-year Texas winning streak, just barely gave him the edge.”
“as the Golden Bears trounced the Longhorns (and everyone else) by 85 points.”

I think Seli and Dean should have had a pec-off to decide it.

Congratulations Andrew, well deserved. Now let’s see what kind of wonderful performances you can conceivably / hopefully do in Tokyo next summer.