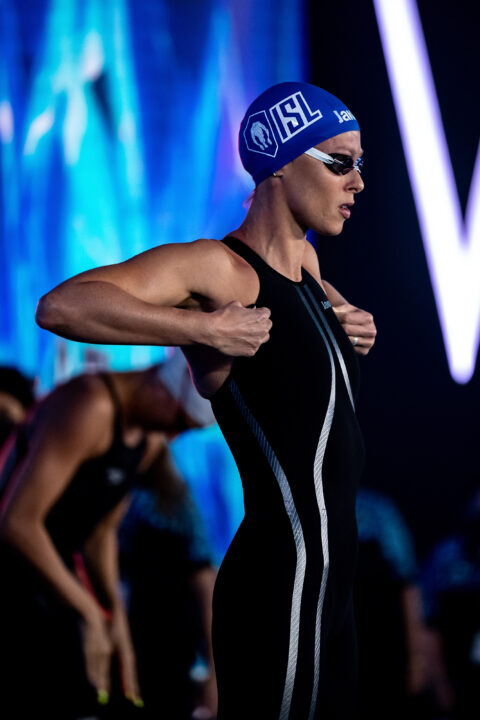 Pellegrini, who had previously said she was retiring at the end of ISL season three, will now swim one final meet in Italy to end her career there. Archive photo via Giorgio Scala / Deepbluemedia / Insidefoto

This article was translated from Italian. Giusy Cisale first reported the news in SwimSwam Italia.

Italian swimmer Federica Pellegrini has registered to swim the 50, 100, and 200-meter freestyle at Italy’s 2021 Winter SC Championships, extending her retirement by one meet to end in Italy.

Currently, Pellegrini is competing as a member of the Aqua Centurions team at the ISL play-offs in Eindhoven. Due to Dutch COVID-19 restrictions, many fans of Pellegrini who had planned to watch her finish competition in the Netherlands were no longer allowed to watch the races in-person.

“This Italian grand finale was how I wanted it. I proposed to the Neapolitans to move to Eindhoven because they bring ‘good,’” Pellegrini said about the decision to race again. “We hope to see them in the Netherlands in mid-November for the playoffs. Today there was a charge of affection after the incredible race.”

She’s currently the world record holder in the LCM 200 freestyle. Swedish superstar Sarah Sjostrom holds the SCM record, but Pellegrini has the fifth-fastest time ever in the event at 1:51.17, tied with Siobhan Haughey. Pellegrini has also been a consistent force in swimming for years, reaching the podium in the 200 free at eight straight World Championships.

The 2008 Olympic champion had announced her retirement from competitions at the end of the International Swimming League season.

“I have already put my body and mind through a lot of stress to arrive in Tokyo after a one-year postponement,” Pellegrini said during an ISL press conference at the beginning of the season. “I can go on a few more weeks after the Olympics. Not more than.”

The Italian Winter SC Championships, which will be held at the end of the month, will mark Pellegrini’s official end.

“I will miss the adrenaline before the race, the cheering in the Italian races, the feeling in the water of being well and feeling omnipotent,” Pellegrini said of swimming. “I will not miss the wake-up call at dawn, the fatigue of training and post-workout nausea.”

Ok then…see you at Fukuoka racing next year.

Yeah right. Keep on trucking, Schmitt is going (I think) still?? Haven’t seen a retirement post from her. Fede will still swim I believe, same as Hosszu

Yeah yeah yeah. We’ll see you in Paris, Federica. Maybe it’s more manageable to keep going if you act like each event is the last one.

There have been too many faux retirements so it’s very doubtful that this will be the last time.

This ain’t the last time, come on …

She should just admit she wants to go to Paris 2024

You may have to wait a long time for her to swim on a French relay.