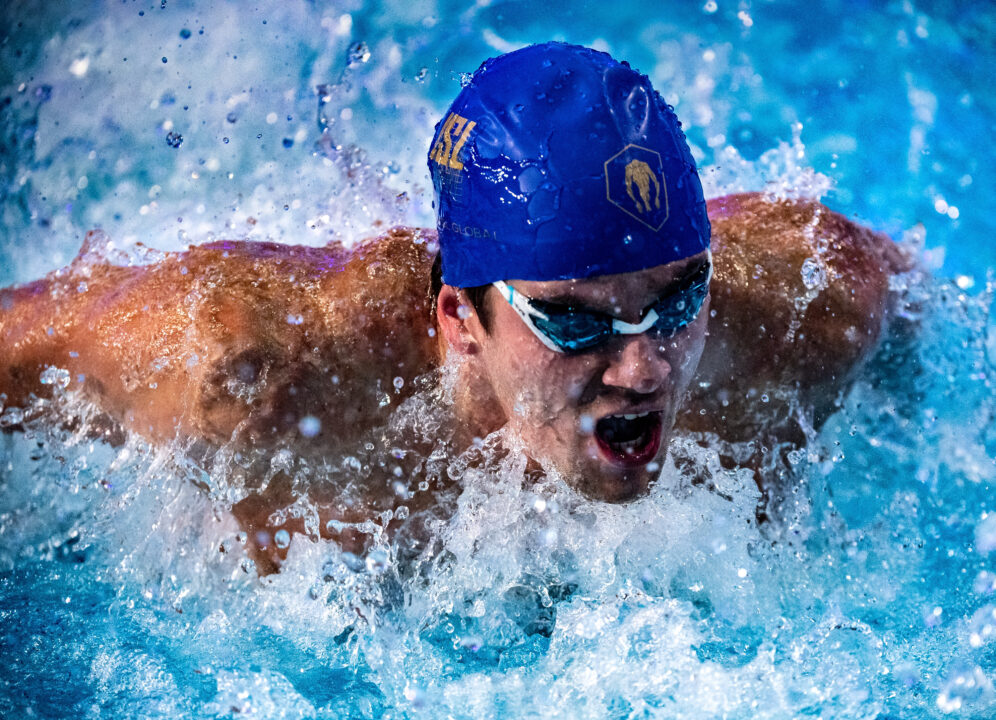 FINA will consider all 2021 ISL matches as official qualifying events for SC Worlds despite the fact official approval has not been sought. Archive photo via Giorgio Scala / Deepbluemedia / Insidefotof

FINA issued a press release on Tuesday announcing that it will in fact recognize all matches from Season 3 of the International Swimming League (ISL) as qualifying events for December’s Short Course World Championships.

This issue popped up after we pointed out that Nic Fink, who was named to the U.S. team for SC Worlds in late October, appeared to be ineligible to race in one of the four events he was slotted in: the 100 IM.

The issue was due to the fact that Fink hadn’t competed in the event at a sanctioned SC Worlds-qualifying meet—he had done it in the ISL, but the league (or the national federation hosting the meets) never applied to have these meets approved as Worlds qualifiers with FINA.

Now, FINA has said that it will recognize times done in 2021 ISL matches for Worlds consideration while also nudging the Italian and Dutch Federation (the two host nations of ISL competition this year) that they need to seek approval from FINA for any international competition organized or sanctioned by them.

In response to the queries concerning the qualification of certain International Swimming League (ISL) 2021 events which took place in Napoli, Italy, and currently taking place in Eindhoven, Netherlands, the FINA Technical Swimming Committee (TSC) has decided to show good will and support for these athletes, and FINA will approve and consider these matches of the ISL 2021 season as qualifying events for the upcoming FINA World Swimming Championships (25m) 2021 in Abu Dhabi, UAE.

FINA wishes to remind both the Italian and Dutch Federation that as per the FINA Rule BL – 12, all Continental and Regional Organisations and Member Federations shall seek approval from FINA for any International Competition organised or sanctioned by them. To obtain approval, applicants must complete and submit a 1-page approval form available on the FINA website (www.fina.org) to FINA at least six (6) months prior to the proposed date of the international competition.

FINA endorses the consideration of the FINA Technical Swimming Committee, and with the support of the FINA Bureau, recognises the voices and achievements of the athletes.

Fink has raced the 100 IM once this year in the ISL, clocking a time of 52.55 during Match 6 of the regular season in Naples. With FINA’s release, it appears his entry into the event at Worlds won’t be an issue, though the organization clearly isn’t pleased that the Italian and Dutch Federation haven’t sought approval from it.

So is Coleman Stewart coming?

Can’t really kick out those who’ve been announced though

Except for Luca Urlando apparently

Santos’s “special addition” was made because Brazil had a spot on their roster to have one more 50 flyer, yet chose not to select him because of budget, instead selecting swimmers who would contributions mainly in Olympic events and relays. FINA thought it was ridiculous to leave out the number one ranked swimmer in his event, so they picked up the tab to have him at WCs. Had Brazil already declared two 50 fly swimmers, I’m not sure they’d have given the invite.

I also believe that the USA can’t legally select Stewart for the team because of the Ted Stevens Act. Even if every eligible national team member declines a spot in the 100 bk, I am still… Read more »

From Wikipedia, if you do not know this act

The Ted Stevens Olympic and Amateur Sports Act is a United States law (codified at 36 U.S.C. Sec. 220501 et seq. of the United States Code) that charters and grants monopoly status to the United States Olympic Committee, and specifies requirements for its member national governing bodies for individual sports.
The current version of the Act was sponsored by Ted Stevens, then–

Given Coleman’s recent performance at ISL it might be for the best that he isn’t going. Using his best time from the last match (he swam it 3 times) he doesn’t even make the 2018 100m back final.